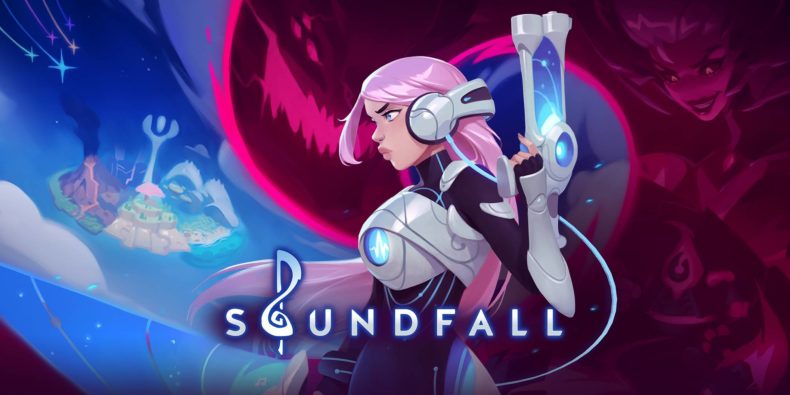 When I previewed Soundfall back in March, I was stunned by its originality and compelling gameplay. In my years writing about video games, no preview has ever left me so excited to play the full release. After suitably exciting my “peers” on the podcast, all that was left to do was wait. Without a clear release date, I had no idea how long it’d take for me to go back to Symphonia and battle the Discordian menace. Thankfully my beloved Nintendo Indie World showcase delivered, and brought me a rhythm twin stick shooter hybrid to enjoy. And enjoy I have.

While struggling to get her musical career going, our hero Melody is mysteriously whisked away to the world of Symphonia one fateful night. This colourful locale is a musical wonderland, but is under threat from weird purple monsters called the Discord. It turns out Melody has rhythm based powers and is the only one who can gather up the instruments of legend (and people to play them) to eject the big bad from this realm. 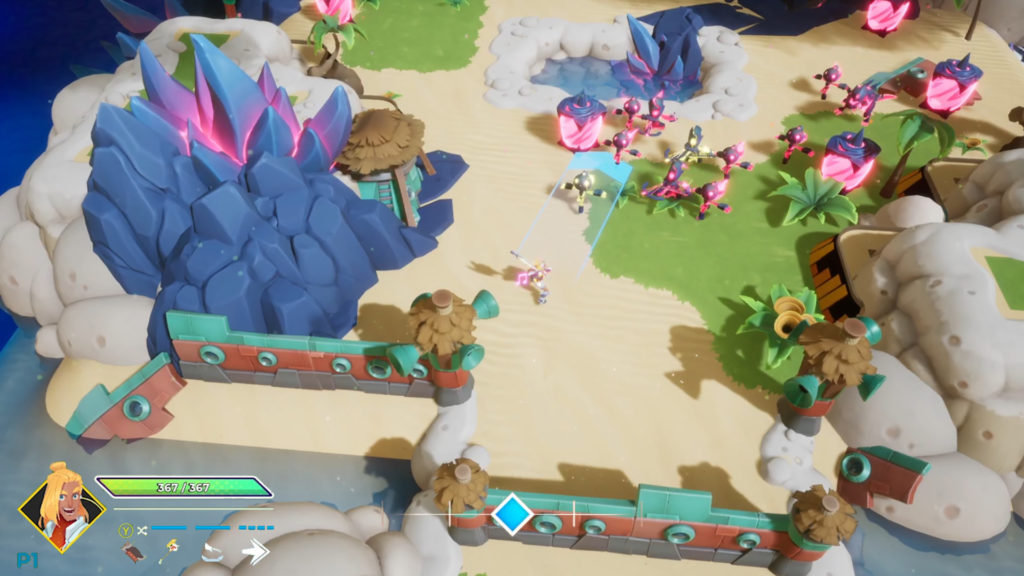 From screenshots alone you’d be forgiven for thinking that Soundfall is a totally normal twin stick shooter. And you’d be half right, but the real hook of the game is that this twin stick shooter is rhythm based. Every shot you fire should be timed to the beat of the music, because that makes the shot more powerful. The result of this is a beautiful dance of neon bullets to the rhythm of a fantastic soundtrack, and a truly unique game.

Your shots aren’t the only thing you’ll need to keep in time with the music. It’s arguably more important to time your dodges to it, because if you do they’ll grant you a small amount of invincibility you can use to weave between bullets. Nothing feels better than sidestepping attack after attack in an arena full of enemies, and as long as you can keep track of the tune you can do just that.

Depending on your playstyle there are tons of different weapons to choose from. If you like to get up close and personal then you can grab a Scattershot and go to town, or you can stay out of the way and aim carefully with a single shot rifle. Going off the beaten track will reward you with more weapons, as will finishing stages with as high a rank as possible (which is more than tough as getting a high rank involves taking no damage and hitting every single beat). There’s plenty of guns to choose from, and they are handily given a power rating so you can pick the best gear between stages. 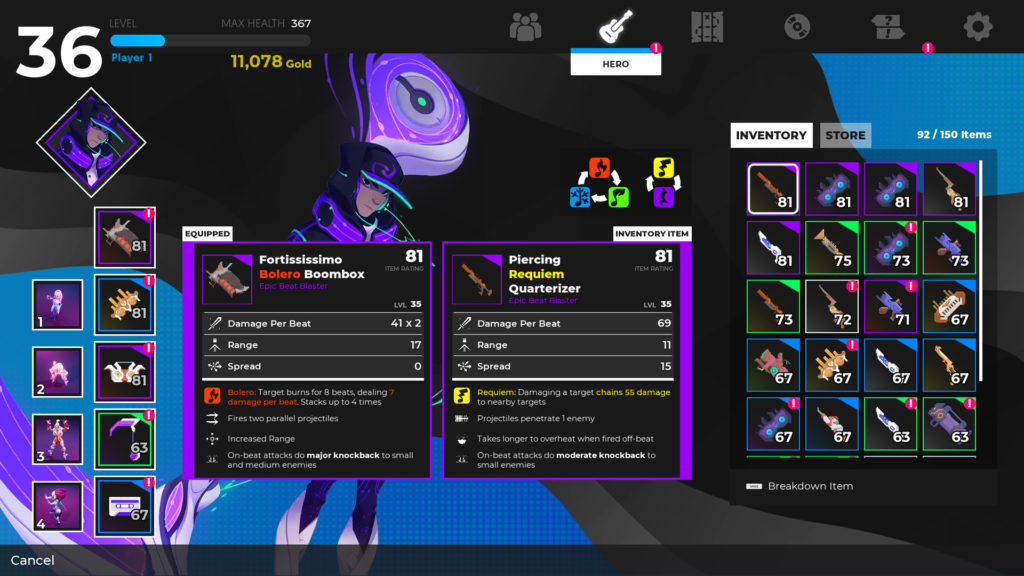 Each world of Soundfall is unique and colourful with elements of the background pulsing and dancing to the music, immersing you in this rhythmic world. Enemies also move in time to the music, and often fire on the beat so you can easily dodge as long as you’ve got rhythm. Weaving your way between a sniper shot and a huge shockwave is more than possible because of this, and feels satisfying every time.

As you progress through Soundfall you’ll meet and unlock a cast of characters who have similar powers to Melody, and will be able to play as them. Each of these characters has a unique weapon and ultimate attack you can use to fend off the Discordians, from Melody’s sword and spinning blade of doom to Jaxon’s charging axe attack and AOE stage dive. It’s fun to experiment with the different characters (and collect loot for them) but ultimately I didn’t find any of them as effective as Melody.

You’ll need all these characters, because Soundfall also has 4 player co-op both locally and online. Playing along to the music with other people is as chaotic as it sounds, and this certainly isn’t a game to put on in the background while you chat with your mates. 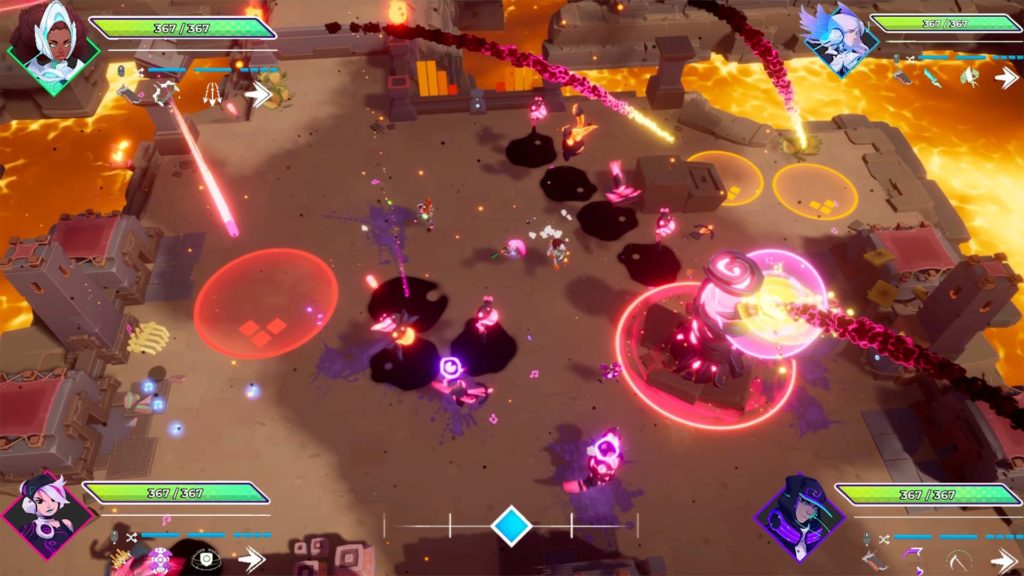 Perhaps the most impressive aspect of all of Soundfall is the soundtrack. This game would fall apart without the perfect tunes to blast and dodge in time to, and the sheer variety is incredible. From catchy pop tunes and heavy metal to epic sweeping classical songs, each new world of Soundfall brings a completely different genre of music to the soundtrack.

As much as I loved my time with Soundfall, it isn’t a game without faults. There’s a distinct lack of enemy variety for one, and towards the end of the game you’ll be a bit bored of the usual suspects spawning in. Although I complimented the loot earlier too, there’s a pretty huge issue of how much equipment you collect for the other characters if you only want to play as a certain one.

Soundfall’s unique blend of music and twin stick shooting is an absolute blast, and beating back baddies to the beat feels incredible. It has a couple of issues with enemy variety and loot, but whether you’re a rhythm game aficionado or just love twitchy action this is one game you can’t afford to miss.

Soundfall is a glorious blend of music and twin stick shooting, and demands to be played for the soundtrack alone.