There are few (if any) games that I’ve sunk more time into than Spelunky. The perfect platforming coupled with the random nature of each run hooked me hard, and thousands of hours later I had beaten the true final boss, done some speed runs, and maybe even died a few times along the way. Upon hearing about the sequel, I was desperate to get more of my caving fix. Despite my anticipation, I was also worried. Would the new enemies, traps, and stages work together in harmony to make each run unique? Would new mechanics ruin the simplicity of my first Roguelike love? With a hint of trepidation, and a handful of bombs and ropes, I was ready to explore the depths of Spelunky 2.

Our original Spelunking hero has spent the last 15 years building a family since his original treasure-filled adventure in the Cave of Olmec. After seeing the face of the golden God while looking up at the moon, he decides to take his wife Tina on a rocket to investigate this further, leaving their daughter Ana behind. After months missing, Ana decides to journey into space in search of her parents, and finds a journal letting her know they are alive but lost in the depths of the moon’s caves. So it’s time to grab the trusty family whip and descend into the dangerous caverns below. 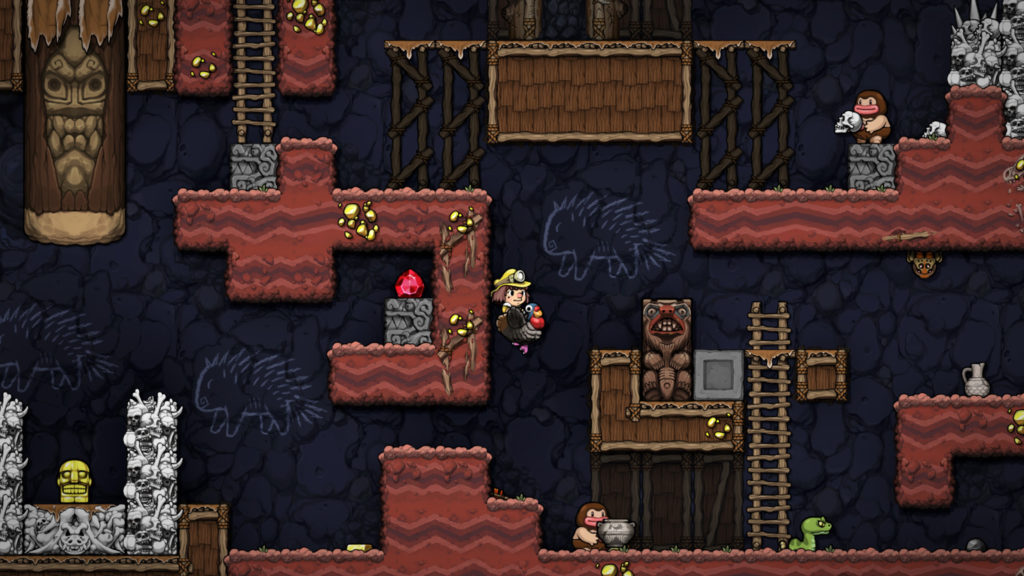 At its core, Spelunky 2 is very similar to the original game. You begin each run with 4 health, bombs, and ropes, and must manoeuvre your way through an intimidating number of traps and enemies to the exit at the bottom of each floor. It’s up to you whether you run in whip flailing, carefully throw a rock to trigger upcoming traps, or bomb your way downwards to avoid confrontation. Each trap and enemy behaves differently, and you’ll need to learn how to cope with every possible combination of hazards blocking your path. You may have taken out a bat before, but when a totem trap is trying to punch you from one side, and an arrow trap is waiting for you on the other it’s a different story. It takes seconds for your health to drop from 4 to 0, and one misjudged trap could spell the end of a promising attempt at Olmec.

Not everything is out to get you in Spelunky 2, though. If you collect enough treasure on your descent, you’ll be able to buy all manner of items and weapons from the various shops under the surface. There’s a great array of new and classic tools to aid you in your adventure, from the faithful jetpack that lets you boost past any pitfalls, to the new Powerpack that makes your weapons and bombs insanely powerful. As well as badass weaponry, you’ll also find pets that will reward with a health-boosting kiss if you carry them to safety.

None of this will sound new to Spelunky diehards, and with returning world themes, enemies and traps you’ll feel right at home diving into your first run if you’ve been Spelunking before. That isn’t to say there isn’t a whole host of new content to explore though, with each new gameplay element adding something new to the classic formula. 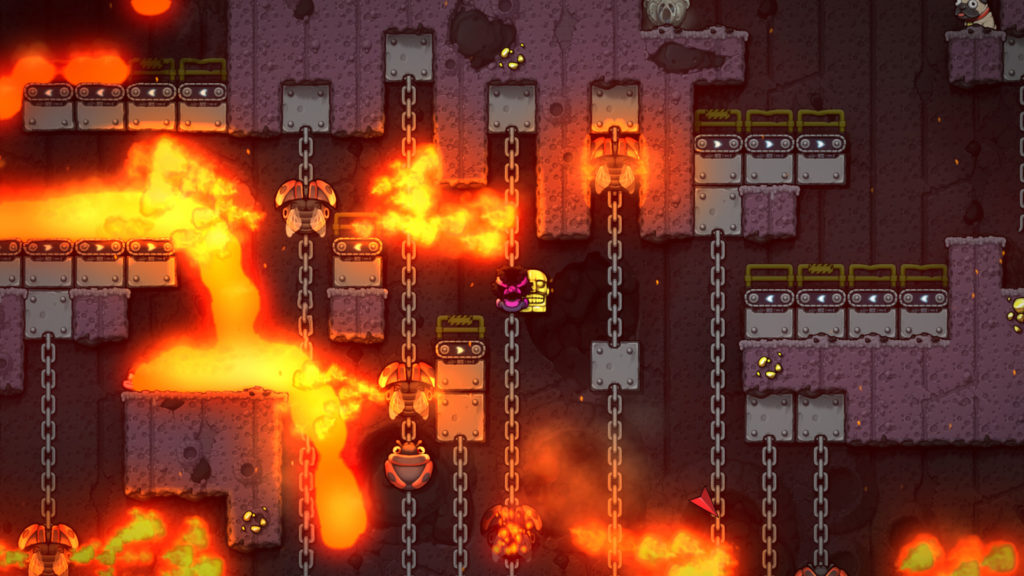 One of these new features is that of mounts. These rideable animals come with their own set of powers, and even take damage instead of you if you take a hit. Gliding around on a Turkey or burning through the jungle on a Rock Dog is always a delight, but to tame them you’ll need to hop on their back and wait for them to get used to you while hoping nothing attacks. Enemies can be found riding the animal companions too, and they can be just as deadly against you as they are with you.

Although some worlds are clearly inspired by the first game, there are plenty of new areas to explore. You won’t follow the same pattern of stages every run in Spelunky 2, though, as there are multiple points on your journey where you’ll be able to pick between two branching paths. Choosing between the lava-filled pools of Volcana or the Spike-laden Jungle isn’t easy, because they will both likely end in death regardless.

Although your main goal is to head downwards as far as possible to save your parents, there are plenty of optional objectives to complete along the way. Saving a set of triplets trapped behind a rock or gathering turkeys for a shopkeeper often puts you in more danger, but the rewards could give you the item you need to survive the trial below. As with every decision you make in Spelunky 2, you’ll have to decide if risking your life is worth the potential to get further than ever before. 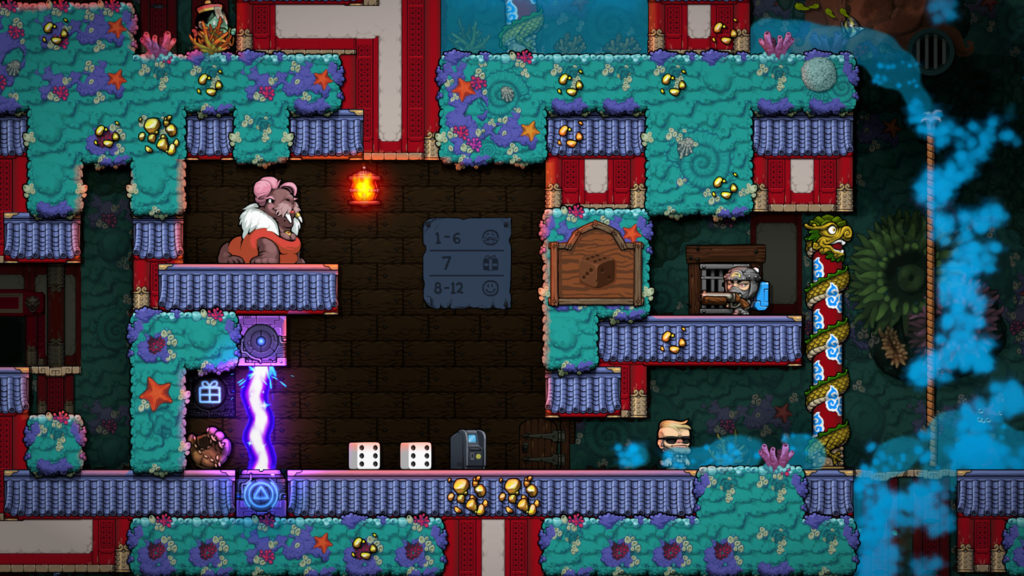 All of these carefully laid out systems would be wasted if your character didn’t control well. Few games feel so instantly perfect when you begin jumping around the environment, and knowing that death will never be down to the level of control makes each run all the more satisfying. A few aspects of handling Ana (or whoever you choose to play as) are improved over the original title, too. You automatically run instead of having to press a button (and this can be changed in the options if you prefer) and can whip against a wall when hanging to propel yourself backwards. Both of these new methods of motion are welcome additions to your movement arsenal.

Hopping around the caves and ruins of Spelunky 2 is made even more enjoyable by the beautiful aesthetic and the soundtrack. The colourful inhabitants of the underground are positively dripping with character, with some of the best and smoothest animations I’ve seen in a 2D game. The soundtrack is sometimes upbeat, sometimes tense, but always a delight. Although impressive in their own right, the visuals and audio never distract from the overall gameplay or from you accomplishing the task at hand.

Spelunky was never a game that apologised for its difficulty, and its sequel is no different. Spelunky 2 is an incredibly tough game, and you’ll likely die hundreds of times before making it halfway to your parents. After playing for around 30 hours I finally achieved my first successful run, even with the thousands of hours I spent playing the first game. Reaching the end of Spelunky 2 is comparable in difficulty to getting the true ending in the original, and I cannot confirm how hard it is to beat the actual final boss this time around. As far as I can tell, it could take me years to finally reach that level of skill. 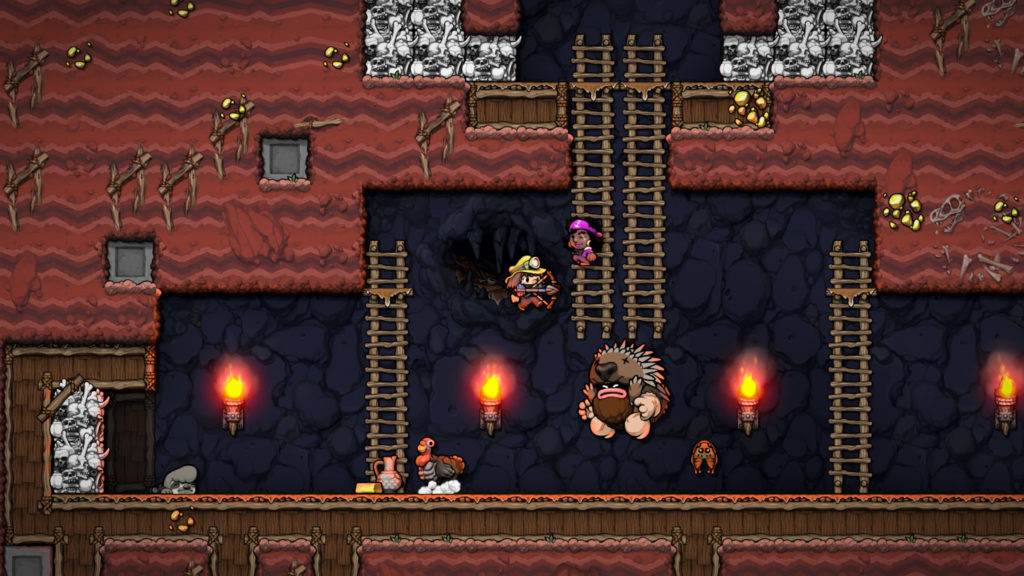 Once you’ve beaten the game, you unlock the ability to play seeded runs. This is ideal for racing friends or simply learning and perfecting a particular set up. There’s also a daily challenge, with leaderboards for those who feel like competing in treasure collecting. It’s nice to have a few ways to play the same stage as everyone else, to see how you all cope with identical obstacles.

As if the amount of time you could spend playing alone isn’t enough, there are also multiplayer modes if you fancy dying with friends. You can play through the main game with up to 4 players if you’d like (with the addition of online play this time) with everyone progressing the moment someone walks through the exit to a floor. You’d think having more players would make it easier to progress deeper below the surface, but the level of chaos that friendly fire brings means that definitely isn’t the case.

If you’d prefer to kill your buddies on purpose rather than accidentally, you can play the competitive Arena mode with friends or bots if needed. This mode is complete madness, but brings back memories of classic Bomberman battling. Online play is also available here, which is just ideal for the current state of the world. There’s a huge list of rules you can change too, from starting health and bombs, to everyone beginning the fight with a random weapon. I found it to be a refreshing change of pace to the main game, and it’s a mode I’ll definitely go back to when gaming with a few buddies. 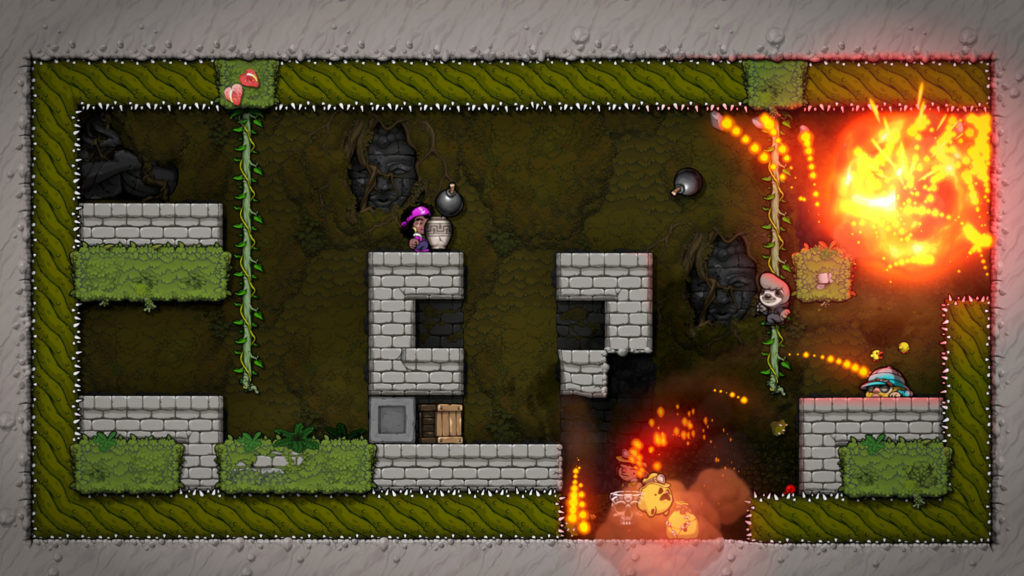 It’s difficult to come up with many negatives about Spelunky 2. It occasionally feels unfair when you get attacked the moment you go through a door, but there was simply nothing else that bothered me about the game. For some people, the unrelenting difficulty will not be to their taste, but I loved it.

Spelunky 2 is everything I could’ve wanted in a sequel to one of my all-time favourite games, and then some. The new content is simply sublime, it controls even better than the original, and the addition of online play is exceptional. Using every hour of your experience to choose the correct way to overcome an obstacle is deeply satisfying, and every death is a learning opportunity. The difficulty will be too much for some, but if you’re able to muster the patience to venture further into the caves, you’ll be rewarded with unlimited hours of sensational gameplay.

The difficulty will be too much for some

Spelunky 2 improves upon the original in every conceivable way, and if you can tolerate the difficulty is an absolute must-play.