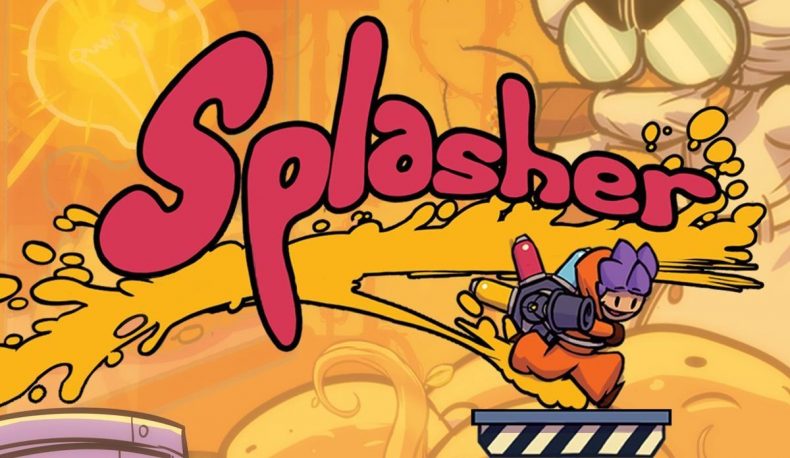 I played an early version of Splasher last November and really enjoyed what I played. However, like many indie games they fall off the radar, never to be seen again. 11 months later, and after releasing on PC in February, Splasher is out on console, and if this is the first time you’ve heard of it, you’re in for a treat. It’s a platformer, streamlined for the twitchy-fingered gamers amongst you. The worlds are colourful, the gameplay is smooth, and its level design has you replaying over and over again. If you’re a fan of Super Meat Boy and Super Rude Bear Resurrection then this was made for you.

You play as I factory worker at InkCorp, and after seeing the boss get up to some rather suspicious business, you’re tasked with making your way through the factory to save all of your fellow employees – the fellow Splashers. That’s pretty much it, and that’s about as much as you really need to know because the gameplay speaks for itself. It’s fairly basic; you can jump and shoot water (and more stuff later on), each needing to be used at the correct time to get through the levels, relying on the precise timing of jumps, avoiding death traps and enemies that inhabit each level. There’s a lot of variety in the levels, with each one making you attack them differently. Sometimes it’s a straightforward A to B design, and other times it’s a case of getting higher up before the green goo causes you to drown. As far as enemies go, some charge at you and others fly. Circular blades become a thorn in your side and the deadly lasers will kill you instantly if you cross their path.

Your water gun is used to fire at enemies, collect Golden Paint, and make certain platforms or objects move. It’s a simple mechanic, but there’s plenty it can be used for and the levels are always throwing fresh challenges at you. A lot of the time you can’t help but run, so making solid runs through a level with death clawing at your heels is intense and massively satisfying if you avoid it. The thing is, you’re going to die a lot. Yep, it’s one of those, and that anger will begin to seep in, and the rage will build. Thankfully, there are barely any load times so jumping straight back in takes a second or two.

Each level can be unlocked by saving the eight Splashers hidden within. Some will be stuck in a tricky place to reach, and others are trapped through another dimension you reach by jumping through a vortex. Each one of these mini levels will have you shooting down a load of different enemies to free the Splasher hanging above in a cage. They add a short respite from the punishing levels, and help to improve your accuracy as they’re normally combat intensive. The final Splasher of the is locked up at the very end of the level, and all of the Golden Paint you’ve collected will either save him or not depending on whether you’ve collected at least 700 blobs of it. It’s pretty easy to collect; you can find it by killing enemies, firing water at it if there’s been a spillage of it somewhere, and golden cogs can be shot at to send quite a lot of it your way. The problem is, you’ll lose it if you die, but it’s not always easy to be cautious what with the crazy levels you’ll play through. The other main mechanic in Splasher is the types of paint throughout the levels, and later on the type of paint you’ll be able to use. There’s a pink paint that you can stick to, and a yellow paint that will let you bounce off it and make it across a multitude of big gaps. It’s pretty easy to use, but it’s knowing which one to make use of when, and with levels getting progressively harder, you’ll be pushed to your limits. If you’re a glutton for punishment, why not try a speedrun as the game has a mode for that. It’s a gorgeous game, what with all the cartoony designs of the characters and the levels, and the soundtrack is equally awesome.

Splasher is tough but satisfying, and you’ll be flying through the levels in no time. It’s a relatively easy game to play, but difficult to master, and this is what gives Splasher its charm. Getting around InkCorp Hall can be a pain, and with certain levels only unlockable when you collect a certain amount of Splashers, it can take a while to reach the harder sections of the game. Still, if you’re up for a challenge, Splasher is right there for you to give it a go.

If you love a challenge, and appreciate fantastic level design, this is most definitely for you.

Splasher is making its way to current generation consoles this Fall