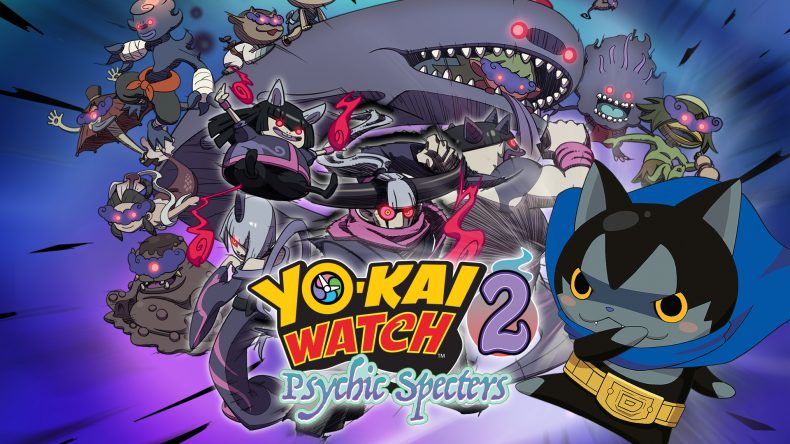 I am an idiot. My love of owning games digitally led me to running out of space on my 3DS SD card, so, I decided to remove a few games that I was sure I wouldn’t need any more, then lo and behold Yo-Kai Watch 2 gets another game in the shape of Psychic Spectres, and it allows you to import your save. Upon investigation Yo-Kai Watch 2 was one of the games I removed from my system, along with the save data. I am an idiot, and it must be the work of a Yo-Kai.

So, I reviewed the Bony Spirits version of Yo-Kai Watch 2 back in March, and judged it to be a decent, different sort of RPG that’s a bit grindy and chore-like, but still full of charm and likable characters. Psychic Spectres contains all the yo-kai from Bony Spirits and Fleshy Souls (that’s over 350) as well as a wealth of extra content in the way of quests (an extra twelve to work through), a new location in the form of the Geragera resort, and the ability to befriend Wicked Yo-kai, something that was impossible in the previous games, no matter how many of them you fought. Everything else is present and correct (depending on your definition of the term ‘correct’). The game is still divided into short episodic chapters, where you’ll work to solve a problem by completing chores for the people around you, which invariably end up with you needing to sort some rogue yo-kai out. At times the story will stall and require you to complete three quests before things can move on, and these quests? Yup, more fetch quests. I mean, I’m no stranger to the usual ‘deliver package’ or ‘kill X amount of Y’ quests – I spent years playing World of Warcraft after all – but here, it’s all encompassing and the time investment required can be off-putting, especially when you need to hop towns, eras, or both simultaneously. The story itself is nice and twee, with each story being both standalone but also over-arcing across the entire game’s run time. It’s just a shame that it stops so frequently to have you perform these ‘key quests’, it’s a bit different from your usual grind which can be optional, this here is enforced to artificially inflate the game’s run time.

In a way I should be thankful for my lapse of judgement in deleting my original save, as it gave me the opportunity to see the differences in story between Nathan and Katie, and also for any differences in picking Soul over Spirit when buying doughnuts. While the latter didn’t seem to make any difference at all (despite the game’s insistence on the contrary) playing as Katie did mean a different place to call home, and a grandfather that looks like her, but oddly her grandmother has the same residence as Nathan’s, but I guess there are some limits to the lengths people will go when creating alternative storylines. This is an enjoyable game with a good story, but it seems to delight in throwing up roadblocks to your progress. The key quests, the baffle boards, the gates of whimsy, the watch upgrades and most unforgivably, the segments where you have to have a particular yo-kai all serve to sully an otherwise saccharine experience. That last point is key as the thing with Yo-Kai is that they’re never guaranteed to become your friend, even if you give them food that they like. In Bony Spirits I spent over an hour trying to get one particular seaweed Yo-Kai and instead getting its slightly different coloured brethren. I eventually got there, but with very little of my patience left, in Psychic Spectres this happened much earlier, with me picking up Yo-Kai I already had as friends, despite not giving them food, while the one I wanted ignored me no matter how many times I provided it with what it wanted.

Level 5 knows there’s a big audience for their Yo-Kai watch games, so for them to release this is a no-brainer, it feels a little bit icky as it’s a full price re-release of games that aren’t even a year old, despite all the additional stuff they’ve brought in, if you haven’t got one of the originals then as a value proposition this is excellent, if you have however, then you’ll have a bit of soul-searching to do to decide if you want to transition over to this to either carry on your existing story play-through, or experience the extra content post-story. I guess you could easily sell your existing copy to recoup some of the cost if you do take that decision (digital consumers be damned). Regardless of all that, this is no worse than the original, but it is slightly improved as a result. The frustrations still exist, but this is the ultimate Yo-Kai Watch 2 package, and as a result the one you should get.

Out of the three versions this is the Yo-Kai Watch 2 to get, it’s very much what has gone before, but this time they’ve thrown in the kitchen sink.