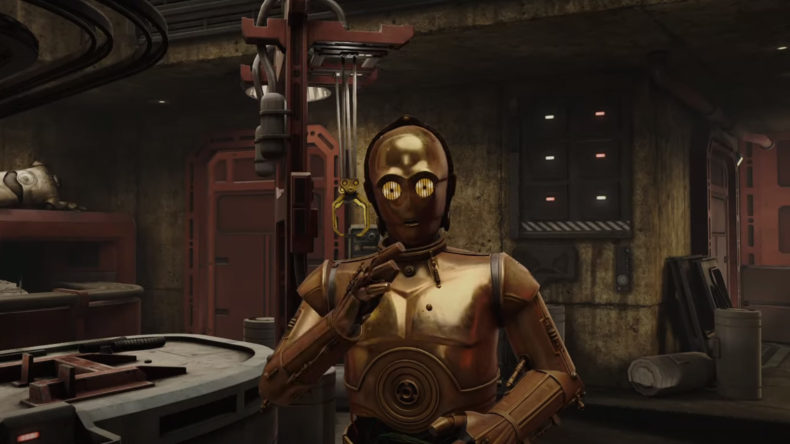 I really wish the powers that be who control the Star Wars license now would realise that what we really want from a Star Wars videogame is the Jedi / Sith power fantasy. Okay, I can’t speak for everyone, but while it’s great that Disney, et al, love to explore the larger universe, two of the coolest and most iconic elements of Star Wars are Force powers and lightsabers. It’s what pulled Jedi: Fallen Order through a tangled web of glitches and technical issues; it’s what makes The Force Unleashed more fun than most Star Wars games despite being a few generations old.

In VR, it’s even cooler, being able to use the Force and wield a lightsaber in a way that has meaning and feels tactile. Vader: Immortal, for example, is a fantastic – albeit short-lived – experience. And it’s telling that the most memorable and intoxicating part of Star Wars: Tales From the Galaxy’s Edge is the half an hour so that you play as a Jedi Padawan alongside Yoda himself (and yes, that’s Frank Oz’s voice) in one of the titular Tales. 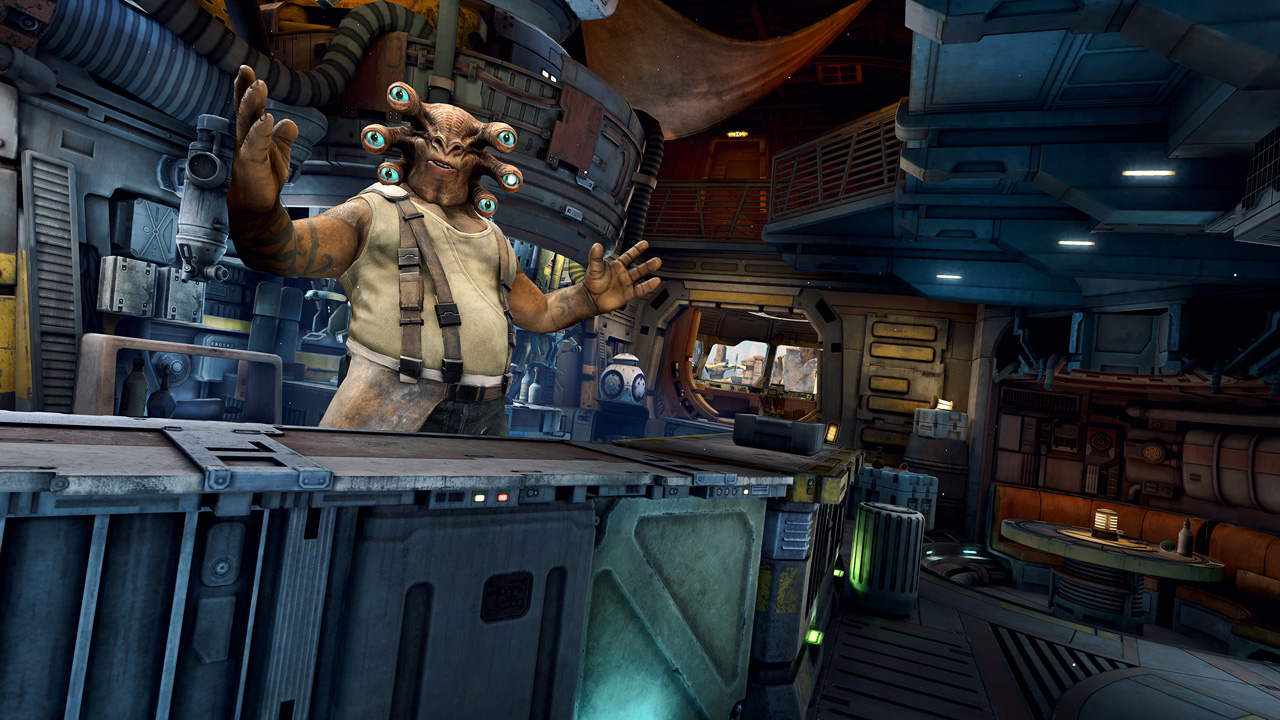 The rest of Star Wars: Tales From the Galaxy’s Edge is more than decent, don’t get me wrong. But it’s almost like developer ILMxLAB brainstormed the most pedestrian means of having an adventure and went with that. And so you play a deckhand aboard a smuggler’s ship who gets in over their head trying to deliver a shipment of highly suspect and highly valuable cargo before the local mob gets hold of it – and you.

As a plot, it’s fine. For around 4 hours you’ll navigate various locales both inside starships and on the surface of Batuu, fighting your way through corridors and canyons, using cover and training drones and thermal detonators to defeat your enemies. And it works, y’know? For the most part Star Wars: Tales From the Galaxy’s Edge is a pretty solid and immersive experience. Gameplay is a mix of combat and light exploration, using a wrist-mounted tracker to follow objectives and a handy multi-tool to power-up, cut through and unscrew obstacles.

And boy, is it Star Wars-y. Fans will eat this up – perhaps even more-so than Vader: Immortal. When you look out the window of the cantina and see the Millennium Falcon anchored in the spaceport, or brush shoulders with the rogue’s gallery of races and characters. Brevity is the curse of many VR games, and what Tales from the Galaxy’s Edge needs is more content. It needs a storyline, and a proper arc for the protagonist. I hoped it would be the tale of a lowly deckhand who discovered their Force-sensitivity and trained under a Master – I guess something like Fallen Order, only in VR and with fewer of those giant frog bastards. 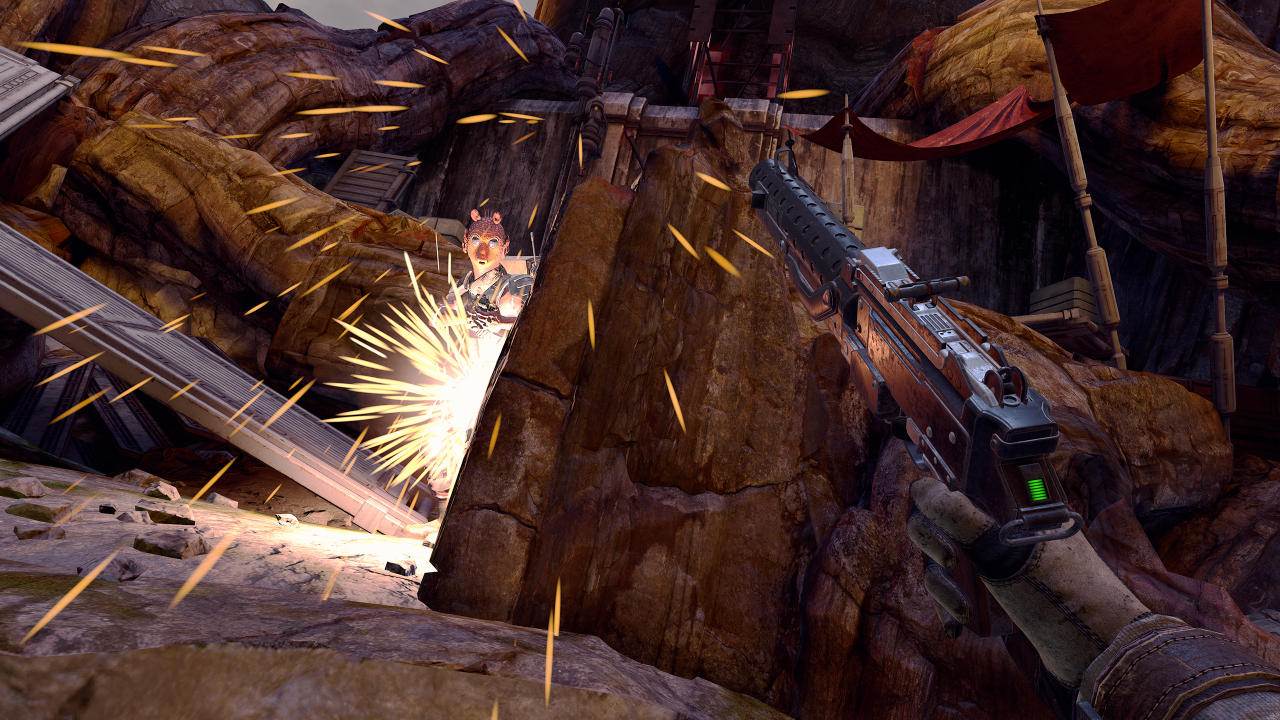 Instead, it’s a shooter, interspersed with brief moments of calm, stuffed with Easter eggs for the fans, and broken up by one oh-so-brief foray into Jedi territory that feels like a nothing more than fan-bait. The shooting is good though; in fact it’s all very good. Picking up and using items, solving simple puzzles. Holstering weapons, reloading, ducking behind cover (and you will have to duck for these moments if you’re standing up, so make sure you have enough space), it all works very well – although there are some annoying bugs. On more than one occasion my gun completely disappeared, on another I couldn’t get a wave of enemies to trigger after I died and respawned, and had to load an earlier save.

But these are fairly minor complaints. Especially given that ILMxLAB have put a lot of effort into the Comfort settings. You can adjust everything from the position of your utility belt to your character’s height. You can adjust a variety of options to reduce motion sickness, including toggling a Teleport more instead of Free Movement. You can also change whether you need to keep the button pressed to hold an item or not, and adjust visual elements like motion blur, and toggle snap turning on or off.

Unfortunately, a lot of the coolest stuff in Tales From the Galaxy’s Edge is skin-deep. It looks, feels and sounds like Star Wars, and the campaign is an enjoyable enough adventure while it lasts. But it simply doesn’t do enough with the ridiculously vast array of options that the Star Wars license affords. Enemy AI is non-existent, and there’s no option to collect and upgrade weapons, unlock new abilities, or make any form of narrative choice. As a VR shooter it’s decent, as a slice of immersive Star Wars fiction it’s great, but it doesn’t feel like a full game, and fails to plumb the depths of what makes Star Wars so loveable and enduringly popular.

Tales From the Galaxy's Edge looks, feels and sounds like Star Wars, and the campaign is an enjoyable enough adventure while it lasts. But it simply doesn’t do enough with the universe.