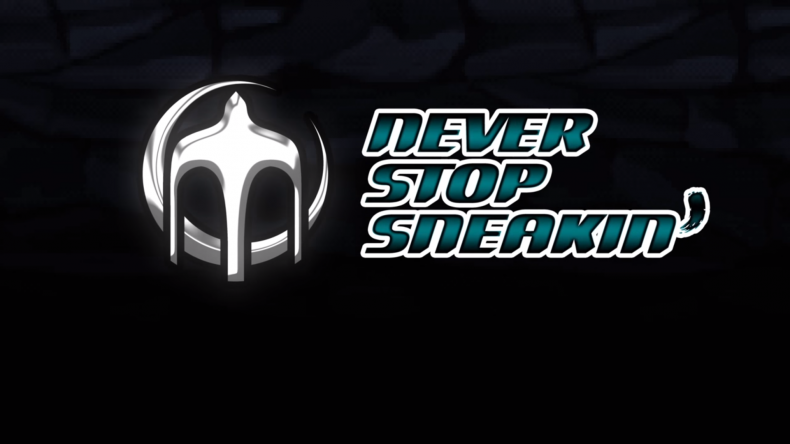 When playing Metal Gear Solid you’re often asked to suspend disbelief, a game series that’s a serious commentary on the evils of war filled with nonsense about super soldiers, nanotechnology, bipedal mechs and women who breathe through their skin. Hideo Kojima’s legendary series is almost a parody of itself, what must it be like to try and make it sillier?

Dust: An Elysian Tale’s developer Humble Hearts has attempted this with the rather awkwardly titled Never Stop Sneakin’, a name that doesn’t exactly roll off the tongue and the less said about the homescreen icon the better. What Never Stop Sneakin’ attempts is a distillation of the stealth elements of Metal Gear Solid into the most basic it can possibly be. There’s no button pressing during play and actions are taken automatically depending on the context of engagement, make no mistake the game is about sneaking but you’re not asked to be a pacifist.

The setup for a series of dad jokes and general silliness is that a one time post room employee who was once promoted above his station to President of the United States, after being removed from said position has now made a time machine, gone back in time, kidnapped all the presidents the US has ever had and is going to shoot them into space unless he is installed as the rightful governor in chief. It’s a brilliantly silly premise and one that makes the corny gags that pepper the game’s writing land better considering not all hit their mark the way they should. The game casts you in the role of Agent, from the Department of Sneakin’ who must navigate a series of levels inspired by the aesthetic of Metal Gear Solid. You move to avoid lines of sight, cameras and sentry turrets to take out the enemies silently. Doing so awards ESP (espionage) which is the currency used to purchase upgrades for your base (a linear construction exercise which has no real bearing apart from setting up filler missions). Moving quickly to despatch enemies builds a multiplier which boosts ESP gains, it’s not a resource you’ll be struggling to obtain, which is good as you cannot go back to replay old missions to build ESP reserves.

As I stated earlier, apart from movement your actions are automatic depending on the context of engagement. If you sneak up to a soldier or turret without being spotted you’ll take them out using your ‘blade’, all other weapons are ‘procure on site’ and defeating enemies will net you bullets, EMP grenades for taking out electronic devices that spot you and smoke grenades for a quick kill if you’re spotted and you don’t have ammo. If you’re spotted by a soldier you’ll automatically shoot them, if you have no bullets you’ll drop a smoke grenade and be able to take them out in the haze, if you have neither you’ll be shot and lose health; similarly, if you’re spotted by a camera or turret you’ll drop an EMP. It’s an elegant system if a little too simple.

Losing track of your resources isn’t a death sentence though; yes you can get a bit headstrong and rush in, losing health due to minor mistakes, but the enemy patterns are easily readable and shouldn’t pose many problems. In fact there are many moments when you’ll relish having amassed a considerable arsenal and just rush in racking up a hefty multiplier, taking down a mass of enemies in one go. It’s a thrill, but also an issue considering it causes the game engine to chug under the duress caused by multiple enemy models all on screen at once.

Level patterns are predictable too, there’ll be a soldier level, then soldiers with cameras, there’ll be a level with just turrets, then turrets and soldiers, then turrets with soldiers and cameras, then it carries on with all three but the cameras and turrets move quicker and soldier patrol routes get longer, but it never really feels more difficult. While the initial idea is appealing, and the humour nice but corny, it doesn’t really take long for repetitiveness to sink in. Every three levels are book-ended with a boss fight of which there are five such as Vice President Helicopter, senators Schad and Freud and secretary of Education Bobert. Fighting these guys again and again is tiresome as the same tactics are performed again and again, with later fights asking you to perform the same routines more times than before; drastic oversimplification has its drawbacks. As you progress you’ll unlock perks like ‘scavenge ammo’ and ‘scavenge health’ which improve the rate you find those items laying on enemies, ‘Spynovirus’ which causes you to sneeze ESP periodically and increased hacking ability, which speeds up the process of accessing enemy terminals for their ESP and packages which all goes into improving your ESP totals. These perks are removed after each mission and are to be regained during the next, but their placement is random, meaning there’s no chance to customise your perk loadout.

There’s a set of unlockable skins for both the Agent and the weapons the Agent holds, but that’s nothing more than a new look for which the appeal wanes after a few switches from the loadout screen. It’s kind of the tale of the whole game, everything is initially good but that feeling soon dissipates and what you’re left with is a good set of jokes with repetitive action, kind of like watching the Roger Moore James Bond movies over and over again, it’s good, but I feel this had so much more potential.

Booby traps, mines, different types of soldier, drones, more boss variants; All would have gone some way to extending the life of Never Stop Sneakin’, and for a game about speed and a kill multiplier it’s really missing a scoring system and friend leaderboards for us all to compare our sneakin’ skills. What is here isn’t really sustainable for the fight up to missions spanning five floors and the quest for a rival time machine. The trials of Agent and Major Milestone are nice, silly fun, but the impetus wanes after a while.

Nice lo-fi PS1 aesthetic
A solid line up of gags

Grows repetitive quickly
Not all jokes are a hit