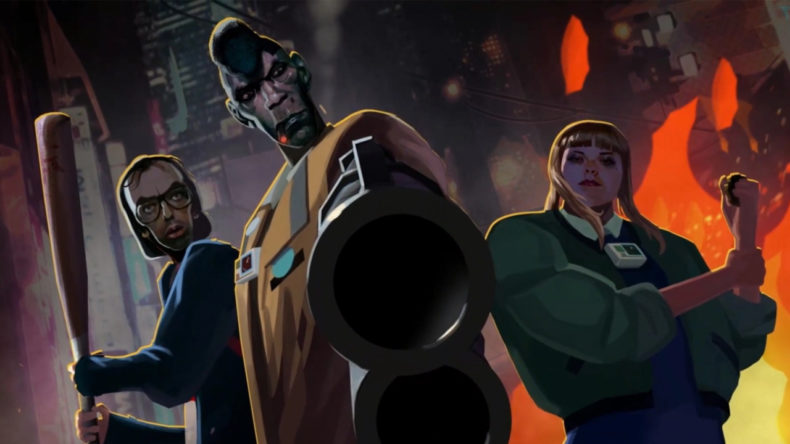 Set in London in the year 2070, Sunday Gold presents a dystopian version of England’s capital city only just slightly worse than present day. As grizzled career criminal Frank Barber, your goal is hit back at the corrupt officials and greedy fat cats currently in control. Aided by old friend Sally Wheeler and weasly hacker, Gavin Dorsey, you’re on a mission to expose the despicable Kenny Hogan.

The ruthless entrepreneur has made a fortune from bloody, violent hound-racing. His prize runner, the titular Sunday Gold, has just won the Desmond Welles cup, securing him even more cash. Frank has history with Hogan, the resolution of which leads much of the plot.

A hybrid of turn-based RPG and point ‘n’ click adventure, Sunday Gold is a great idea on paper. In practice, however, it’s held back by a few odd design choices and an incredibly steep difficulty curve that utterly punishes you in the early stages. The bulk of the game will be spent exploring static environments like a classic point ‘n’ click, examining, using, and combining items and features to progress. 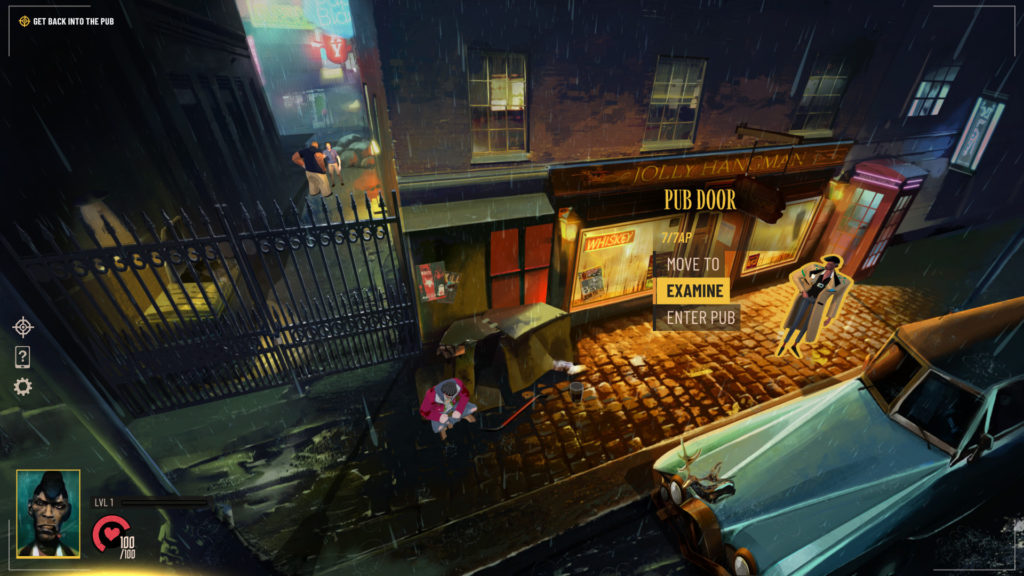 Right off the bat, you’re introduced to Frank, a hard-bitten cockney with an awful forced accent who hangs around seedy pubs and only ever does good deeds by proxy. The opening few minutes act as a tutorial as Frank works to re-enter a pub he’s been kicked out of. This involves beating up a thug in the alleyway behind it and distracting the bouncer.

As there’s no real animation, each time you move Frank or interact with the environment you’re subjected to a burst of static. It takes around 5 seconds to become irritating and then continues through the whole duration. Playing as either Frank or his accomplices, your main task is to examine everything and solve puzzles ranging from simple to infuriating in order to move forward.

There are a few nice ideas here though. For example, Sally is pretty strong, and she’ll occasionally be called to move something hearvy, which instigates a timing-oriented minigame. Frank picks locks and Gavin hacks computers, and all are handled with similar minigames. It has to be said, the hacking one feels more like actual hacking, but is fairly dull if you don’t solve the sequence right away. 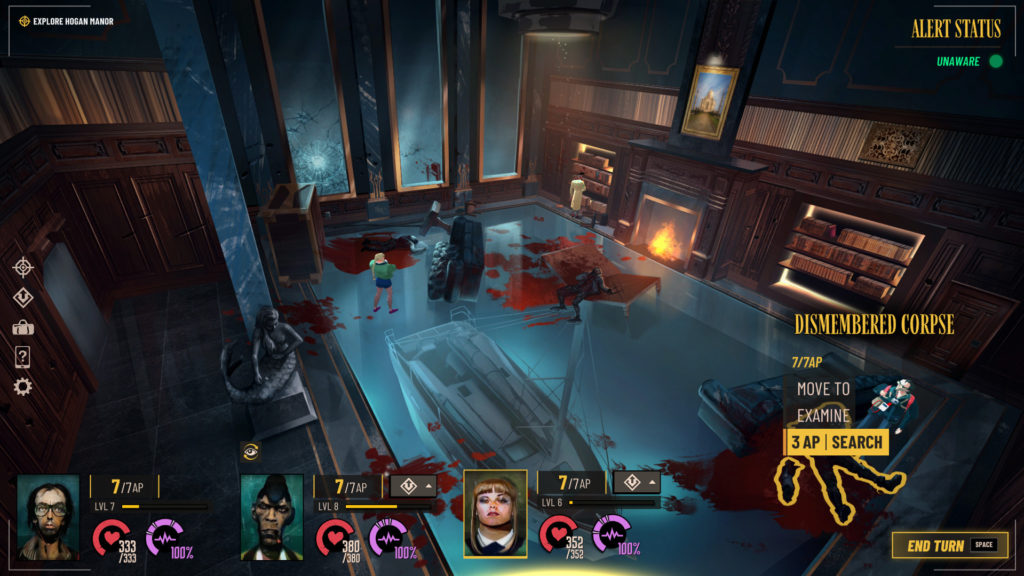 Each character has a number of Action Points to move around and interact before the turn ends. Every action has a cost associated, and you’ll run out of points pretty quick if you’re not careful. Often this is no problem; the turn ends and you begin a new one. However, throughout a lot of the missions you’ll have the enemy moving somewhere too.

For example, the opening mission sees the foul-mouthed trio breaking into Gavin’s office building to steal information on Hogan. Once the security guards are alerted, everything you do will bring them closer to you, eventually resulting in them bursting in on you. No matter how careful and lucky you are, eventually they’ll find you, which leads into the combat.

Here you line-up JRPG-style and take turns to pummel one another. Each character has a standard attack and special attack (Frank’s rifle or Sally’s knuckle dusters, for instance) which you can swap out as you find new gear throughout the levels. There are also various curatives and buffs you can employ to help you out – and boy will you need them to help you out. Particularly in the early game, combat is incredibly tough. 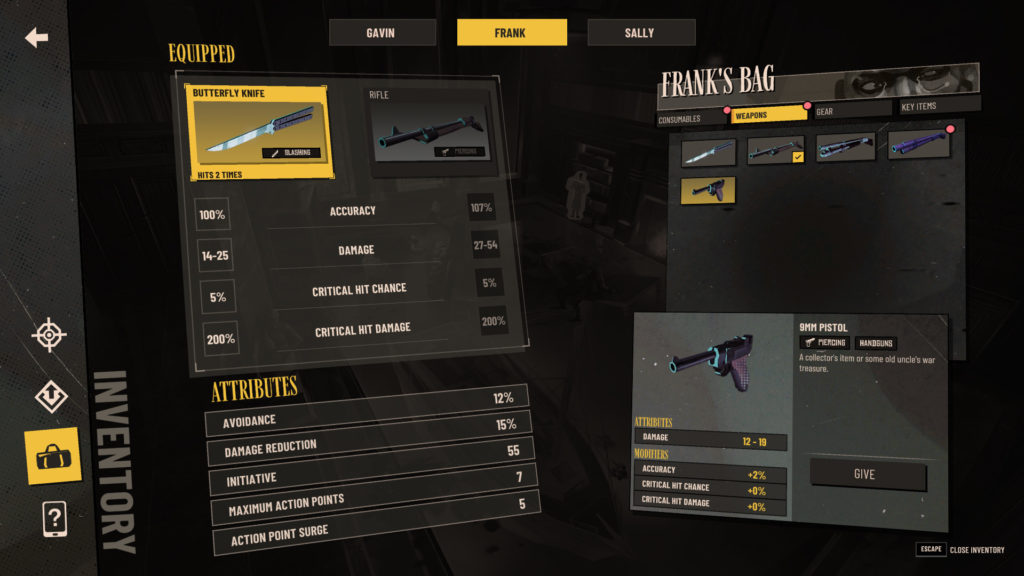 Every enemy hits like a truck, and you’ve only got Sally to heal you (a measly amount), or whatever painkillers you’ve scavenged. You can’t rest and heal up between fights if you have no items, so once you’re weak and damaged you’ll stay that way. Not only that, but each character has a Composure meter similar to something like Darkest Dungeon. The more damage you take, the more panicked you’ll become, until you’re whiffing shots, freezing up altogether or outright hallucinating. It’s a cool mechanic, of course, but it’s also hugely frustrating. As you level up and unlock new skills or improve your favourites, things become easier – not least because you’ll usually have a small supply of curatives. But early on, it’s incredibly uphill.

Perhaps Sunday Gold’s biggest failing is its characters. Some may find them more palatable than I did, but the main trio is a mostly unlikeable bunch. Sally comes across as the most likeable and human, but Frank’s constant quips and Gavin’s whiny passive-aggressiveness pervade every conversation. 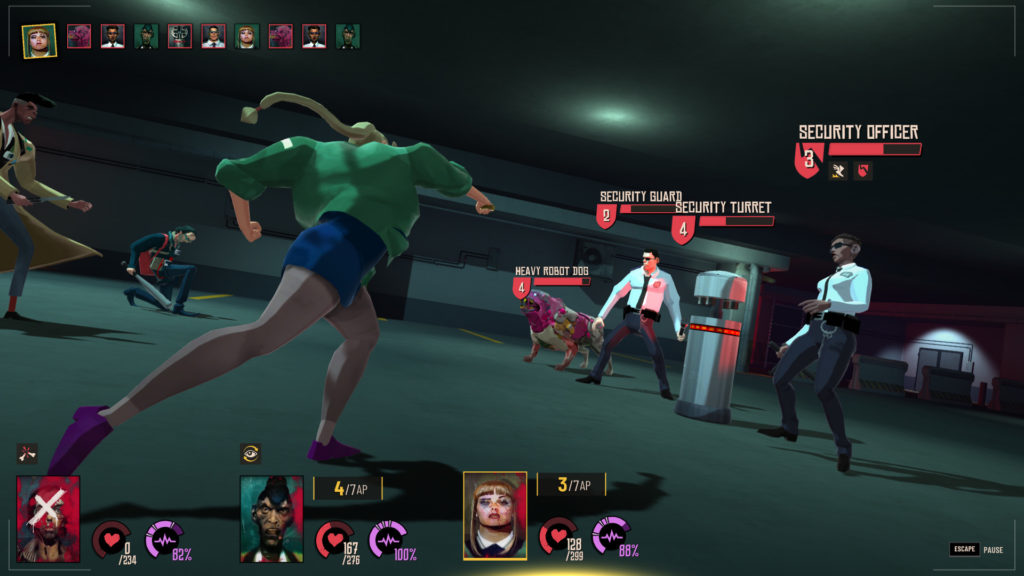 The comic book art-style certainly isn’t lacking in detail and personality but, again, it’s going to be a matter of taste. The same style is baked into every screen, every environment, and every character, and if it doesn’t click with you, you’ll struggle to enjoy the game at all. It isn’t helped by the hit-and-miss voice acting, the bad accents, and clumsy writing that lacks any sense of nuance or mystique.

Aesthetic preferences aside, though, Sunday Gold has a fairly fresh core concept, a setting that feels underused if not unique in games, and the kind of difficulty curve some people crave. It’s not pretty but it’s stylish; it’s not particularly slick, but it is brash. There are some solid gameplay ideas here, and that may well be enough to make up for its shortcomings.

Sunday Gold may not be pretty, but it's certainly stylish, and a few fresh ideas help make up for its shortcomings.