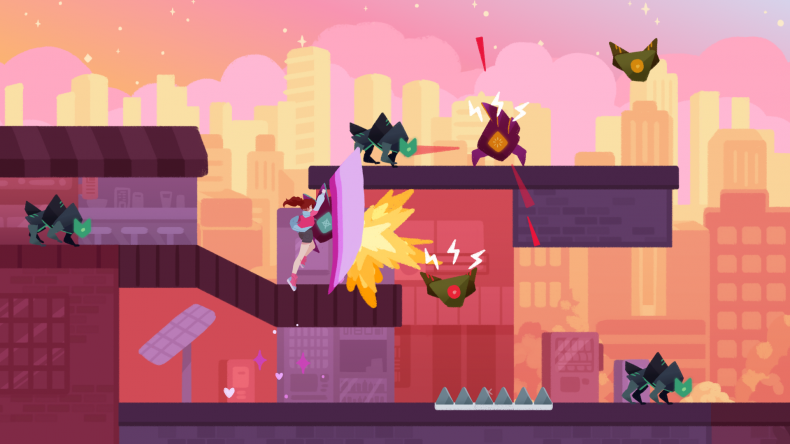 I love pastel colours. The pink and peach tones associated with this palette are not particularly common in video games, often shunned to make way for dull realistic colours or a bolder bright art direction. Fortunately, Super Crush KO is here to fulfil all of your pastel needs. If you enjoy the colour pink (and frantic 2D character action gameplay) then you are in for a treat.

You play the role of Karen, a fashionable young woman whose cat Chubbz is kidnapped by an alien life form. Obviously Karen’s only course of action in this situation is to chase after the catnapper and destroy all the alien robots en-route. The story is purposefully pretty basic, but has some comedic moments in the dialogue between our protagonist and the pet thief.

On your adventure to get Chubbz back, you’ll be battling an array of metallic enemies. Despite its 2D trappings, the combat in Super Crush KO is most comparable to a Devil May Cry game. Battles are a high paced affair, with dodging, launching and gunplay an important part of keeping your character alive and your combo going. Special moves are carefully introduced so you can best learn how to chain your attacks together, and discover which moves can interrupt an enemies incoming attack. You are also ranked (again similarly to DMC) based on your combat prowess, with a D-rank slowly rising to an S as you keep your moves coming and switch between melee and blaster combat to keep the enemies at bay. Robotic monsters aren’t the only thing filling your typical Super Crush KO stage. As you continue through Karen’s adventure, you’ll find a selection of obstacles that you’ll need to navigate and even use to your advantage. Portals, lasers, jump pads, and more are slowly added throughout the game, and these constant additions mean that every level feels new and interesting. It feels so satisfying to keep a combo going by teleporting from one side of the screen to the other, bouncing between enemies.

Each different enemy type in Super Crush KO serves a purpose. Some have projectile attacks, some can fly, and they all require different methods to interrupt their attacks. A new enemy being introduced is another layer of complexity added to the game, as you learn the split second reactions needed to defeat them undamaged and apply that knowledge in a variety of settings. My only issue with the enemies is in their design. They are all just a mishmash of dark blue shapes, and although often based on animals, once you’ve seen one of their designs you’ve essentially seen them all. Even the bosses are just scaled up dark blue shapes, and if there is any part of Super Crush KO that’s lacking it’s the fairly forgettable boss fights. One thing you won’t get bored of looking at, however, are the beautifully coloured backgrounds. The vibrant cityscapes and sky are just so pleasant to run alongside (especially when accompanied with the relaxing soundtrack) and the overall style of Super Crush KO is just so charming and adorable. Cutscenes take place before boss fights, and are in the form of charming comic book panels. These easy to digest story morsels really add to the character of the game, and of Karen herself.

In its 3-4 hour run time, Super Crush KO packs in a delightful assortment of new and evolving gameplay. But if you are left wanting more, there are rankings and leaderboards for any score chasers out there. Replaying older levels with your newfound skills is very enjoyable, and chasing the elusive perfect combo medals and no hit runs are great incentives to play past the credits.

Super Crush KO surpassed all my expectations of how good a 2D character action game could be. From its gameplay to its art style, the game delights on every level. Despite being only a few hours long, I can’t see myself ever deleting it from my Switch thanks to its medals and leaderboards. I may have initially come to Super Crush KO for the pastel colours, but I stayed for the tight combat and constant stream of new mechanics to master.

A delightful 2D character action game, with fluid combat that feels incredible. There are a ton of ideas packed into Super Crush KO's short runtime, and plenty of goals to chase after the credits.