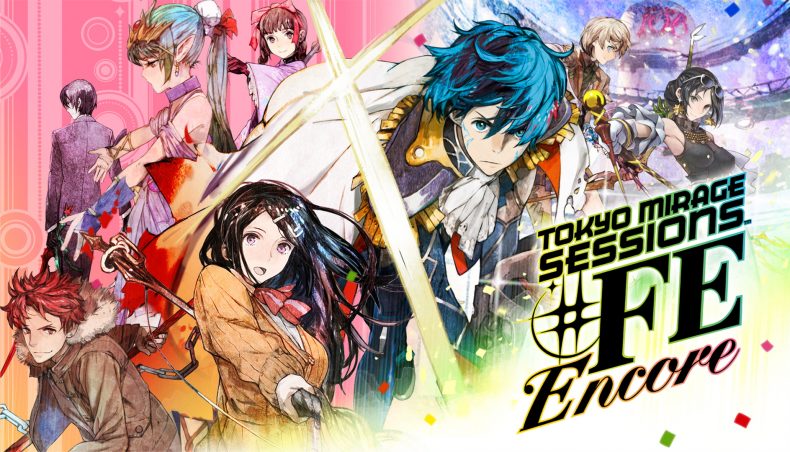 For most people, this is going to be a brand new JRPG because not many people owned a Wii U, let alone a copy of Tokyo Mirage Sessions #FE on it. The crossover project that brought together Shin Megami Tensei and Fire Emblem ended up being a very special new IP that serves as something unexpected. Having now played it, instead of being a true Shin Megami Tensei or Fire Emblem like experience, Tokyo Mirage Sessions #FE Encore is more of a game that feels perfect to bring Persona and JRPG fans into Shin Megami Tensei games. A lot of the design decisions are excellent and they perfectly suit portable play. Tokyo Mirage Sessions #FE Encore is set in Tokyo as the name suggests, and it features you playing as Itsuki Aoi who finds himself involved in Fortuna Entertainment and the idol industry in Japan. The story sees Itsuki come into contact with various colourful characters who he grows closer to as the game progresses. The story feels very much like a Persona game that has crossed over into the idol industry in Japan. The story and gameplay structure even follows a similar format of modern Persona games where dungeons revolve around specific characters. Speaking of characters, the localisation is great and the characters are brilliant. You interact with them through an in-game social chat and the conversations are hilarious. They even have stickers. The story is pretty light-hearted overall despite the various dark moments.

The gameplay in Tokyo Mirage Sessions is split up into main story missions, which you can do at anytime, and side missions. I love how there’s an intermission in between main story chapters where you can just relax and do side missions or grind or just explore the various gorgeous locations in game. Once you’re ready to progress, you can move to the next story segment. While Persona games have a calendar, you have freedom here to do things at your own pace. If you feel like spending dozens of hours grinding in a dungeon, you can do so to your heart’s content before moving to the next story beat.

Speaking of dungeons, they are very well designed and all have some gimmick. The best part is, the game is super lenient with healing. You can teleport out of dungeons at anytime to do a complete heal before jumping back inside to progress. If you’re bored of the dungeon, you can exit it and go and explore the rest of the locations in game. The game never penalises you for doing your own thing. Dungeons are full of enemy mirages that serve as the equivalent of demons or shadows in Tokyo Mirage Sessions. You can hit them in the dungeon before running into them for a first attack chance. There are some very powerful savage enemies that are indicated by different coloured mirages and these enemies will likely wipe your party, so it is best to escape when you can through an item. Combat in Tokyo Mirage Sessions #FE was already great from the few hours I managed playing on the Wii U a few years ago. On Switch, it is much better with the ability to skip a majority of animations during follow up attacks. When you exploit an enemy weakness, your other party members follow up with a session skill. This is one of the most important parts of the combat in Tokyo Mirage Sessions. Enemies also have sessions and you do not want to be on the receiving end of one during a boss fight. This adds a nice amount of strategy to even the small battles. You also unlock more skills that are pretty grand to witness. Tokyo Mirage Sessions isn’t afraid to show off its animations and grandiose skills.

Instead of using a demon or a persona, you use a mirage that is essentially your weapon in game. This mirage will grow as you become stronger in game and you will perform various rituals in the bloom palace that is kind of like the velvet room in Persona or cathedral of shadows in Shin Megami Tensei. This is where Tiki helps you unlock new skills and also where you access some the Wii U DLC. I love how the topic (or phone) section of the game will notify you when you can unlock or gain stronger skills here so you can teleport back, upgrade, and go back to dungeon crawling within minutes. Tokyo Mirage Sessions #FE Encore is full of good design decisions that respect the player’s time.

The Wii U DLC available here features three specific dungeons you can visit to either gain experience quickly, fight much harder savage enemies, or gain skills quickly. These DLC dungeons are available in the base game on Switch and will be useful if you want to ensure all your characters are at a similar level or if you just want to be overpowered and break the game. It is great to have this option right from the get-go. There are also costumes you can unlock with a few interesting extras in the Switch version. In terms of gameplay additions, this release has a new quick session toggle as the biggest gameplay improvement over the Wii U release. There is also some story content that you progressively gain access to that rewards you with useful skills or with some additional costumes. I will say that the new music is at par with the base game’s superlative soundtrack. I’m very glad Nintendo is finally seeing a soundtrack release for this game. Hopefully Donkey Kong Country Tropical Freeze is next in that regard.

When it comes to visuals, Tokyo Mirage Sessions #FE Encore is a mixed bag. When played in handheld on the go, it looks excellent. There are some instances where the game looks a bit soft when exploring the overworld though. The rest of the game including combat all look great. Docked is where things aren’t great. It reminds me of the Bayonetta ports where the visuals docked looked basically the same as handheld, which is disappointing. Performance on the other hand has been great. Load times are super fast almost across the board as well.

Tokyo Mirage Sessions #FE Encore has one of the best Nintendo soundtracks in years. I will never tire of Reincarnation, Give Me, and Feel. The background music is also very good and the battle theme is one of the better Atlus battle themes in a while. Voice acting is very good as well but I was hoping for a dub option since most Atlus games have dub options. There are a few issues not only with the port but with the localisation. The lack of a dub definitely hurts but this release has a bigger issue: it commits the cardinal sin of not having all voiced dialogue subtitled. Battle dialogue is still not subtitled so you have no idea what your party members are telling you. Barring this, the conversion to Switch while amazing when it comes to load times, is not great when it comes to visuals. When played docked even on a 1080p display, Tokyo Mirage Sessions #FE Encore is noticeably soft. This is definitely best played on portable where it looks nice and feels great.

Overall, this is not only one of the best JRPGs on Nintendo Switch but one of the better Atlus games in a long time. The soundtrack is still superlative and the game is a joy to play on the go. While I’m not too pleased about how it looks docked and the lack of a dub and battle subtitles, Tokyo Mirage Sessions #FE Encore is well worth your time if you enjoy great stories, excellent combat and music, and own a Nintendo Switch.

Tokyo Mirage Sessions #FE Encore is a fantastic JRPG that could have been better technically and when it comes to localisation.