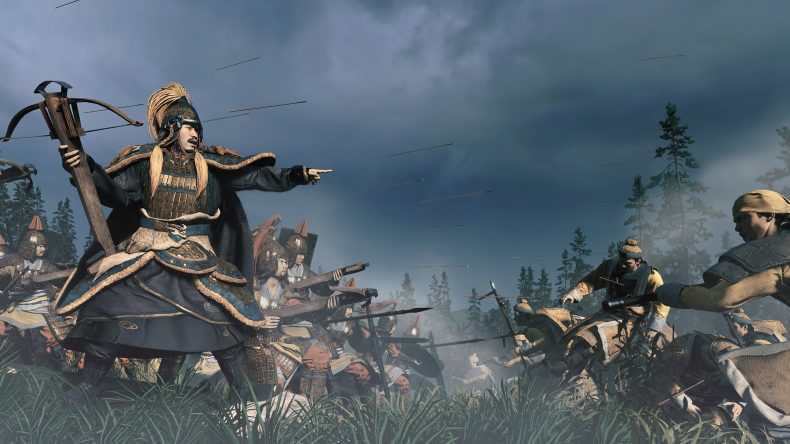 Total War: Three Kingdoms has managed to enamor itself among fans by not being afraid to do things a little differently. It doesn’t just focus on the grand battles and violence, but also the political backdrop its rich Chinese historical tale affords it. This gives it an added layer of realism, that is most welcome in the series. There’s a real sense these factions are run by warlords with malleable personalities. It’s easy to view them as pawns to manipulate for your benefit if you play your cards right. The new Mandate of Heaven DLC made me feel for the first time that, maybe, the AI is looking at me and thinking exactly the same thing.

Mandate of Heaven focuses on the activity at the beginning of the Yellow Turban Rebellion. As such events are unfolding earlier than in the main game. As with previous DLC, the main gameplay aspects and UI remain almost identical to the base game. However, a few notable tweaks to some settings and mechanics make these new campaign modes feel rather different at times. There are essentially three different perspectives to play in this new period. The most traditional of these is a supporter of the current Han empire. In this role, you need to quash the rebellion and bring peace to the Han Dynasty. On the flip side, you can also play as one of the three brothers who kick-started the Yellow Turban Rebellion. This campaign instead focuses on spreading your influence and rallying China to your cause. With enough support, your aim is to ultimately conquer the Chinese capital. But by far the most unique and interesting of the new campaigns is the one where you are the Emperor himself. During the other campaigns, there’s mention of the Emperor’s lack of response to the emerging uprising and you wonder why this central superpower wouldn’t do more to prevent collapse. This final campaign mode does a great job of showing you his struggle and revealing the dark political underbelly that engulfed him. Surrounded by eunuchs and power-hungry warlords seeking their own advantage, the Royal Court is in chaos. It is in fact here, rather than the battlefield where you will win your campaign. If you can stop the constant spending of money before you bankrupt the kingdom, you might just have enough resources to pull together an army to stop the Rebellion in its tracks. Good luck.

Different mechanics are introduced, which dramatically change how you need to go about your conquering. As a Han Dynasty supporter, you will be constantly battling against a new metric called Fervour. It signifies the support for the imminent rebellion, and if left unchecked will see your followers rebel against you. Obviously playing as the rebellion, Fervour gives you this advantage to play with. For you there’s Zeal; another mechanic to contend with. As an ever-decaying buff, that replenishes after successful battles, Zeal forces you to keep relentlessly attacking enemies to keep you strong and the people on your side. Whilst both of these are fairly straightforward metrics, their implementation forces you to play differently. As Han supporters, you’ll constantly be checking your conquered settlements. You’ll need to make sure the Public Order there doesn’t disintegrate rather than just focusing on out and out expansion elsewhere. Zeal however for the rebellion almost pushes you to spread yourself too thinly attack-wise, as you drive for continuous victories. A humbling defeat at the hands of a strong warlord soon sets you straight. And it’s then that you realise that Mandate of Heaven really does feel like an expansion. Not just an expansion on ideas and mechanics, but on the emphasis of the delicate balance that running a kingdom requires. Certain metrics in the main game that previously looked after themselves, but now require you to add them to the many spinning plates you must keep on track.

Mandate of Heaven therefore certainly feels like the hardest version of Three Kingdoms to date. It definitely demands more from the player than ever before. It requires you to consider contradicting metrics and desires to find that delicate balance that will see you win power. All this whilst still having the strategic nouse to win on the battlefield too. The Romance version of the game, which I played, is still by far the most enjoyable. The raised difficulty certainly isn’t insurmountable, and if anything the challenge will be welcomed by veterans. For those who feel like they’ve mastered Three Kingdoms, Mandate of Heaven definitely offers them something to think about.

What I also liked is the way in which Creative Assembly have gone about integrating the content. Care has been taken to make the base game and expansions not feel part of a collective whole. Now you can choose the start date of your campaign, and all campaigns are included. Some parts like the Eight Princes DLC can only happen later in the timeline, whereas for others you can now choose to play from different points and different ages of your chosen warlord. Not only does it mean you can choose the part of the rebellion time period you want to play, but also means every campaign has its place. In fact, if someone new to the game bought all the content at once, they’d be hard-pressed to distinguish the DLC content. It’s a small thing, but a nice touch nonetheless. FTotal War: Three Kingdoms has always been about power struggles and jockeying for position. You need to bide your time and look for the right moment to strike. But in Mandate of Heaven you really “feel” the power shifting, and you’re not always in control of it. The bureaucratic eunuchs that stifle your Royal Court as Emperor were like a millstone around my neck. They prevented me from playing as I would like, affecting my rule, and perception among my people. I wanted to scream “But this isn’t me, it’s them!” at my followers, pleading with them for forgiveness, whilst at the same time trying to do everything to loosen their grip on proceedings so I could take back control. It felt like a struggle and gave you a real sense of how history really did play out and why in Ancient China.

Mandate of Heaven is a solid piece of DLC, giving you not just more Total War: Three Kingdoms, but more to think about as well. It forces you to rethink your approach if you really want to stay in control. You might fall into the trap of your normal playstyle and perhaps fail on your first attempt, but that won’t put you off, nor should it. It feels like it compliments the main game perfectly, and its seamless integration makes it feel right at home. The new characters to play as, and new battle units to experiment with certainly keep things fresh, as do the new mechanics that force you to keep your eye on the ball. And it gives you a sense more than ever before that things are happening behind the scenes, that enemies are plotting your downfall from right under your nose. It’s a meaty, addictive add-on that is thoroughly enjoyable.

Can be tough initially

Mandate of Heaven brings some new ideas and challenges to the Three Kingdoms table. In doing so, the power struggles of Ancient China have never felt more real.