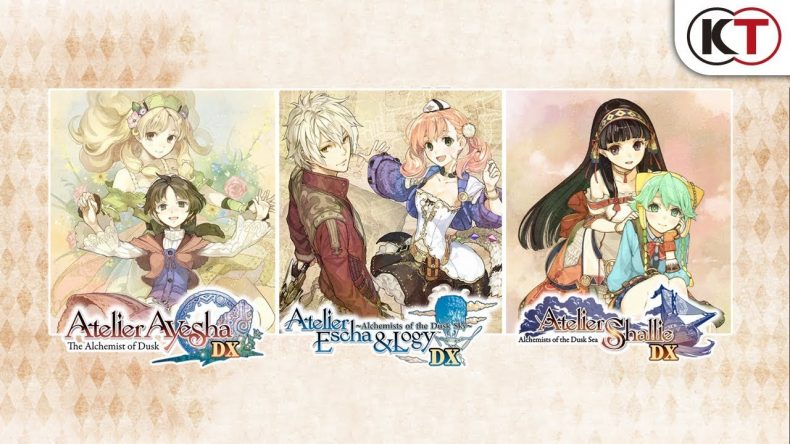 Over the last few years, Koei Tecmo and Gust have been slowly bringing more of the older Atelier games to newer platforms. This has been a huge part of why the series has been growing in the West. Atelier Sophie was definitely one of the better games in the series that also happened to be a fantastic entry point for new players and this was another factor contributing to more people giving one of Koei Tecmo’s best franchises a shot. There are of course some missteps, like Atelier Firis, but the Atelier series is in a much healthier place now thanks to Atelier Sophie and most recently the fantastic Atelier Ryza. In December 2018, Koei Tecmo brought a trio of Atelier games to PS4, Nintendo Switch, and PC in the form of the Atelier Arland Series Deluxe Pack and they have followed that up with the Atelier Dusk Trilogy Deluxe Pack that is out today on the same platforms. As with every Atelier game release, people wonder whether the newest release is a great entry point to the series. Until recently, it has been hard to get people into the series because most of the fan favourite releases have been stuck on older hardware. Today, the series is in a much better place and almost everyone has a PS4 or Switch if they are interested in Japanese games. There are now 12 Atelier games on PS4 and 10 on Nintendo Switch. The Atelier Dusk Trilogy Deluxe Pack is three games and a great introduction to the older Atelier games and series in general. The three games included are part of the same overarching trilogy but can be enjoyed on their own as well.

Atelier Ayesha: The Alchemist of Dusk DX is the first game in the Atelier Dusk trilogy and the 14th overall Atelier release. It features gorgeous art from Hidari and is the first Atelier release to nail the fairy tale aesthetic all the way. If you’ve played Fire Emblem Echoes: Shadows of Valentia, you will be familiar with Hidari’s work already. You play as Ayesha Altugle who works with her sister Nio. One thing leads to another and Ayesha has to grow as an alchemist to be able to rescue her sister. Atelier Escha and Logy is an interesting game because it lets you play as either Escha Malier or Logix Fiscario which is a first for the series. This entry even got an anime adaptation and is one my favourite Atelier games with its new synthesis options. Atelier Shallie builds on Atelier Escha and Logy and is set a decade after Atelier Ayesha and 6 years after Atelier Escha and Logy. Atelier Shallie lets you play as either Shallistera Argo or Shallotte Elminus who are both nicknamed Shallie. In terms of story, Ayesha was the best but gameplay progressively improved with Shallie being the best of the lot. Since this new bundle is essentially the third time these games are being released, fans of the franchise who own them already on PS3 or PS Vita likely want to know what is included here that wasn’t in the games before. The DX releases are basically the PS3 and PS Vita content with most of the DLC included and all features together, but at a higher resolution and at a stable frame rate. The PS Vita version already had a lot more content in the form of characters, costumes, and even bosses that weren’t on PS3. Those who own them on PS3 are likely going to find it worth getting on PS4 or Switch for the extra content and improved visuals.

Visually, the Atelier Dusk Trilogy Deluxe Pack has similar issues as the Atelier Arland Series Deluxe Pack. A lot of the assets look like they are from the PS3 version. Hidari’s character designs scale very well and the environments in the Dusk games are gorgeous even without much improvement from prior versions. Even though a lot of the backgrounds and designs are rather simple, the game never looks bad like Atelier Lydie does sometimes. The lack of proper shadows on the other hand and lighting being a bit old definitely show the games’ age. Performance is a mostly locked 30fps. There are some situations where the game stutters in some cutscenes when using the skipping option. It is worth noting that performance is a massive upgrade over the PS Vita releases on PS4 even at just a 30fps target. The big issues with this release are similar to those with the Atelier Arland Series Deluxe Pack. On PS4 Pro, the technical side of things is lacking. Having recently tried out Atelier Rorona on an old laptop at 60fps without issues, it is disappointing that Gust continues to keep the frame rate target on PS4 and PS4 Pro at just 30fps. On the visual side of things, this set of games definitely could have used some better anti aliasing. The ports also lack some quality of life improvements that would’ve gone a long way like quick save which is a staple of modern JRPGs.

Not as much improvement visually
Some performance issues when fast forwarding

The Atelier Dusk Trilogy Deluxe Pack brings three excellent Atelier games to modern systems with most of the previous DLC and while these are great entry points to the series, the ports could have been better.

You may also like
Atelier Ayesha: The Alchemist of DuskAtelier Escha & Logy ~Alchemists of the Dusk Sky~Reviews