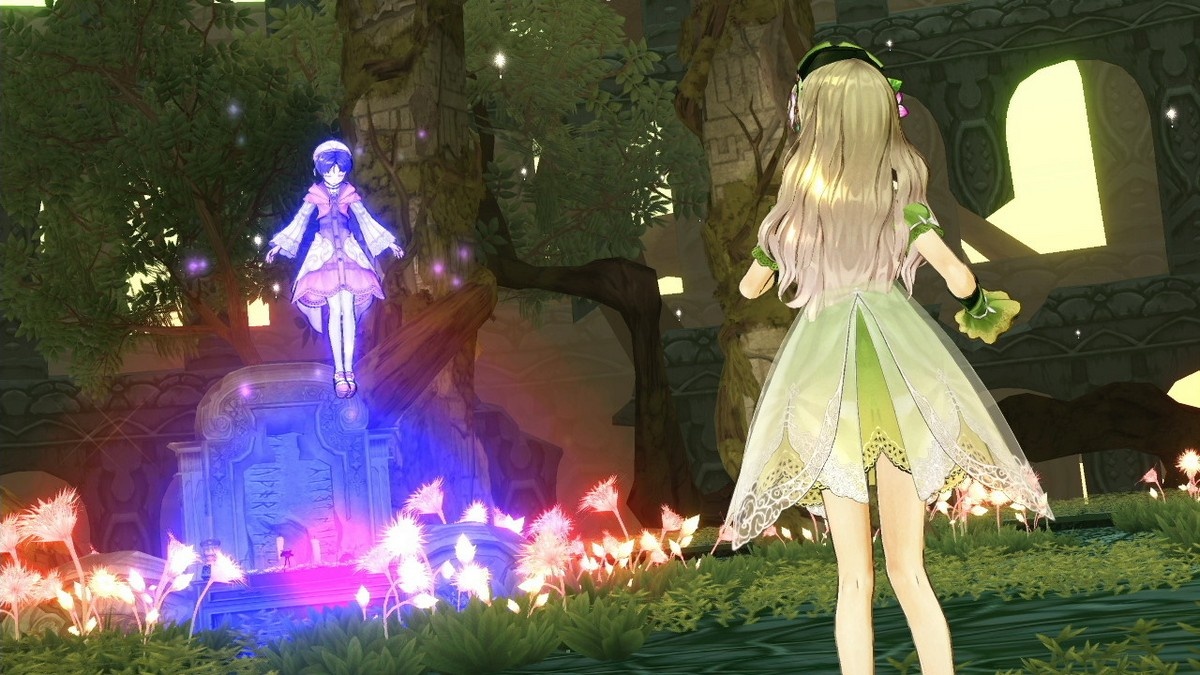 These days, the majority of big budget AAA adventure games are hardly what you’d call “cute”. Or even friendly, particularly. Even the Tomb Raider reboot earned itself a PEGI 18 rating for its use of bad language and often-brutal violence. Very few Western games make the conscious choice to eschew adult content in favour of a more subdued tone, and as a result it’s often left to the more obscure titles coming out of the East to offer gamers a non-violent alternative.

One such title is Atelier Ayesha: The Alchemist of Dusk, the newest game from developers Gust Incorporated, a JRPG that focuses more on creation than destruction and features a far more innocent and naive protagonist than you’d find in most Western titles. It’s the fourteenth entry in the long-running Atelier series, which began back in 1997, but while it shares the name and many gameplay elements with the franchise, The Alchemist of Dusk is a standalone title set in a world separate from the core series. The titular Ayesha is a young apothecary who lives in a little cabin in the country with her cow-like pet, Pana, and earns a living brewing potions and medicines to sell to passing merchants. The story begins a year after the disappearance of her sister Nio, who vanished while gathering herbs from the nearby ruins.

One day while visiting Nio’s memorial (placed in the same ruins), Ayesha is visited by an apparition of her sister. At the same time, an experienced, world-weary Alchemist named Keithgriff Hazeldine is exploring the ruins, and explains to Ayesha that Nio is still alive but trapped somewhere beyond the physical world. If she wants to get her back, Ayesha will have to unravel the mystery of a rare breed of glowing red flowers, and embark on a journey that will take her all over the country.

Determined to find Nio, Ayesha leaves her little house and heads to the nearest town, where she meets Regina Kurtis, a “prospector”, who she’s known all her life. Regina is the first of several companions who will join Ayesha’s quest throughout the story, and is arguably the least-annoying female character.

The plot, though largely uncluttered, isn’t always very clear, and occasionally meanders along tangents that would be better avoided. For example, some of the characters have their own personal storylines to pursue and, while it’s a nice change of direction to explore the pasts of your companions, it’s an unnecessary distraction from the core quest. That said, this is a very niche title designed to cater to fans of the franchise, so if you’ve rushed out to pick up The Alchemist of Dusk, you probably know what to expect already in that regard.

The Alchemist of Dusk suffers from some very inconsistent visuals. The cel-shaded character models are vibrant and well-detailed, and their movement about the gameworld is watchable enough if not particularly slick, but the environments are unimaginative in the extreme. A dull, tedious colour palette combines with a lack of any real creativity to present a world that feels lifeless and empty. Battle screens contain a little more detail, however, and the enemy designs are often decidedly off-the-wall. Special attacks and items display a variety of colour and sparkle that’s synonymous with the genre, but generally fails to dazzle.

The sound design is fairly irritating throughout Atelier Ayesha. The voice-acting is pretty dire in of itself, but when it’s coupled with the high-pitched, nails-on-a-chalkboard tone that’s fairly consistent within JRPGs, it becomes maddening. Unfortunately, “nails-on-a-chalkboard” is also the best way to describe the voice of Ayesha herself, whose dialogue makes up a high percentage of the game’s speech. The various other female characters like Regina and Wilbel fare no better, and even the male characters have a horribly monotonous tone to their voices. It’s nothing that’s not par for the course, sadly, so fans of the genre will likely see no problem with it. The music suffers a similar fate. It’s sub-standard JRPG fare, a mix of J-Pop and lift muzak that, at one point, I had to mute in the audio settings. If there’s one area in which Atelier Ayesha simply fails, it’s the sound design. There are also instances where the spoken dialogue suddenly isn’t, and I found myself staring for several moments at the mouths of my characters opening and closing with less expression than your average ventriloquist’s dummy before I realised there was a bug at work. In a game so technically barren, bugs and glitches of any kind really shouldn’t be tolerated.

The core concept of The Alchemist of Dusk is the alchemy itself. The creation of potions and items is the bread and butter of Ayesha’s quest, from which all in-game currency is derived and which spurs you to explore the world to find rare ingredients or reagents.

It’s not always easy to understand, and isn’t explained very clearly, but after a few hours you will find that certain elements click into place and make the process easier. You’ll gather reagents from everywhere: enemies drop them, lootable plants contain them – you can even just wander up to a merchant and buy a lot of them. Returning to Ayesha’s current base of operations will give you access to her Cauldron, into which you can place various ingredients to create all manner of things from healing medicines to temporary buffs and weapon enhancements. Synthesising anything takes a certain amount of time (as does travelling on the world map or fighting, resting or questing), and Ayesha only has three years to find Nio before you reach the unsatisfactory “bad” ending. As a by-product, the most important things in The Alchemist of Dusk are resource management and forward planning. If you take the wrong items into the field with you and find a fight insurmountable as a result, you may end up losing five or six days retreading your steps.

Navigation around the world is simple enough, and while the world map is nothing special it’s mainly here (or in “dungeons”) that Ayesha will encounter random wandering monsters. Combat is turn-based and exactly what you’d expect, presenting the same opposing lines of player characters and enemies that we’ve been seeing in JRPGs for the last fifteen years. Ayesha can use items, everyone else can use special attacks, but everything uses up your turn so combat becomes a bit of a balancing act. Additionally, you can support one another in a given turn, bolstering defence and increasing attack values. The fights aren’t terribly tactical, though you can move around parts of the battlefield between attacks to, for instance, get behind an opponent’s exposed back for a sneaky attack.

Gust know that the combat isn’t what brings in their audience, and Atelier Ayesha’s fighting feels undercooked and lacking in personality beside the more in-depth alchemy. The Alchemist of Dusk is a long game, though not necessarily a big game. The runtime will clear 50 hours, but as the actual content is very samey throughout, there’s little chance that any but real fans of the franchise, the genre or the unending fetch-quests that make up the bulk of the gameplay will reach the end. That said, the story does have an allure of its own, and if you want to unlock every ending you may have to spend longer in the world beyond the main storyline, building or improving your relationships with Ayesha’s companions.

VERDICT: By Western standards, Atelier Ayesha is a strange game. Entirely inoffensive, but saccharine to the point where it becomes sickly, it’s one that will only appeal to those who know what to expect – or who go into it with an open mind. The cutesy art style is pretty enough but, ultimately, not particularly refined, and there’s little visual dazzle to snare your interest.

Standard, uninspired JRPG combat is thankfully bookended by the more compelling alchemy mechanic, but as a package Atelier Ayesha: The Alchemist of Dusk offers little in the way of variety or excitement, and while there is fun to be had mixing medicines and synthesising cure-alls, grating dialogue and painfully unlikeable music get in the way. A good game to idle away a few lazy afternoons, but nothing to trouble 2013’s legion of AAAs.

Senior Content Editor Mick has been playing games for over 30 years and writing about them for around 12. After drifting from site to site for a while, settling briefly at the now-defunct Made2Game and freelancing for the gone-but-not-forgotten NintendoGamer Magazine, he came at last to rest at Godisageek. Mick has been a reviewer, staff writer and content editor here for some time, while also moonlighting a little for Red Bull Games. He has 4 kids, has written 2 novels, and sometimes even manages to pay a bill or two. You'll usually find him defending the galaxy in Destiny 2, battling evil in Diablo 3, or lurking in the background on Twitter. Find him there @Jedi_Beats_Tank, or on XBL (JediWaster247), PSN (Jedi_Waster) or Nintendo (JediWaster).
MORE LIKE THIS
AtelierAtelier Ayesha: The Alchemist of DuskNamco Bandai