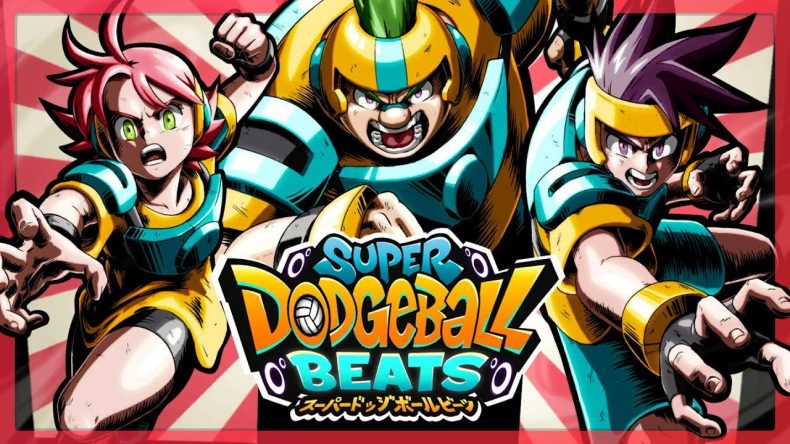 For people of a certain age, myself included, Dodgeball conjures up only one thing – the comedy with Vince Vaughn and Ben Stiller. I don’t believe I’ve ever actually played a real game of dodgeball in my life. Mainly because it’s not that big in the UK, and also because I don’t trust myself to dodge a wrench. So, Super Dodgeball Beats will likely be my first foray into the wonderful world of a sport I’ve only seen in movies. Except it won’t, because it isn’t really about dodgeball at all, as you’ll come to see.

The clue is in the title, I suppose. This is clearly a rhythm game masquerading as dodgeball, with your four man team just being a blunt personification of the four buttons on your Joy-Con. You then press the right buttons in time with music as dictating by shrinking concentric circles around each player. The more you get right, the more you push the score indicator into your blue end, as opposed to the orange end of your opponent. If at the end of the song, it is still in your blue area, you win.

As with most rhythm games worth their salt, simple button presses are not the only requirement. There’s also the traditional “hold” move to do at certain points. There’s also a relatively unique input that requires you to hold the left stick in a certain direction in time, as if to simulate a slow-mo pass between two players. Timing of the start, end, and of course getting the direction right is key to pulling this off correctly. A mix of these three inputs will pop up through each song, and the mastering of them all will lead you to victory. The way the single player modes work, is you choose your difficulty level, although initial only the easiest “Rookie” level is unlocked. You are then entered into a 10-team league, and must play each opponent once, with three points awarded for a win, and a single point for a draw. After the nine rounds, the points are added up, and the top teams are entered into a 8-team knockout to ultimately determine the winner. For those keeping count that’s a twelve match tournament that you need to ultimately be victorious in to unlock harder difficulties and progress. That’s quite a long, repetitive slog, and is really where Super Dodgeball Beats starts to unravel.

But before we get to that, another key feature that needs mentioning is the power-ups. After chaining enough well-timed inputs together, you build up a special meter. When full, you can unleash a power-up that will often disrupt your opponent’s progress. These could either restrict your vision significantly so you can’t see the button prompts on-screen, or put you in situations where you need to complete perfect button-presses to avoid a penalty. They certainly pack a punch and add brief moments of tension to your focus. But the issue is, they are too over-the-top, placing far too much emphasis on disrupting your flow, and forcing you into errors.

If you combine everything together, Super Dodgeball Beats starts becoming a bit of a mess. As you progress through the difficulties, the pace of inputs and their combinations naturally become trickier.  When you add in power-ups that make it virtually impossible to keep track of what you should be pressing, and an increasingly competent AI, your mistakes feel cheap and you get punished. Now imagine you’re 11 games into that 12 game competition and you lose, and have to re-do songs. Frustrating is an understatement. I should clarify, I’m all for tough challenges in these types of games. I’d punish myself on the highest difficulty of Guitar Hero games for hours on end. I even developed mild Carpal Tunnel after far too much time spent on Guitar Hero II. The issue is Super Dodgeball Beats doesn’t make this challenge enjoyable. The choice of concentric circles around characters rather than a timeline, makes judging the length of hold and pass inputs a bit of guesswork, even more so if there’s a power-up disrupting your vision. It also doesn’t help that they don’t always seem to land in time with music. They’re often random off-beats that require more focus to time than feels necessary. Also, the limited track list – linked to the different dodge-ball teams you play against – all end up sounding similar. I found myself having no favourites I looked forward to or wanted to practice.

There’s an argument to be had that local multiplayer is where this title performs because competing to screw over a friend with a well-timed power-up is more enjoyable than faceless AI. And normally this would be true, but in my experience, the multiplayer just ended up frustrating two people instead of one. Rarely is it a case of who kept up with the game’s timing the best, but who managed to survive the power-up onslaught better. The loser ends up sulking and the winner gets a false sense of victory.

The core premise of a fledgling dodgeball team rising to prominence through the medium of rhythm isn’t a terrible idea on it’s own. And with a few key changes, this could be one that comes recommended. However, for some reason its design decisions seep the fun out of it as a rhythm title. It seems to want to take every opportunity to frustrate and over-complicate the experience. There will be some that will embrace the challenge for what it is, and good luck to those masochists. For everyone else however, there are plenty of other rhythm games out there that do a better job of championing their genre.

It's not really about dodgeball, and it certainly isn't super. And the beats are obscured and hard to hit most of the time. Don't let the title deceive you.