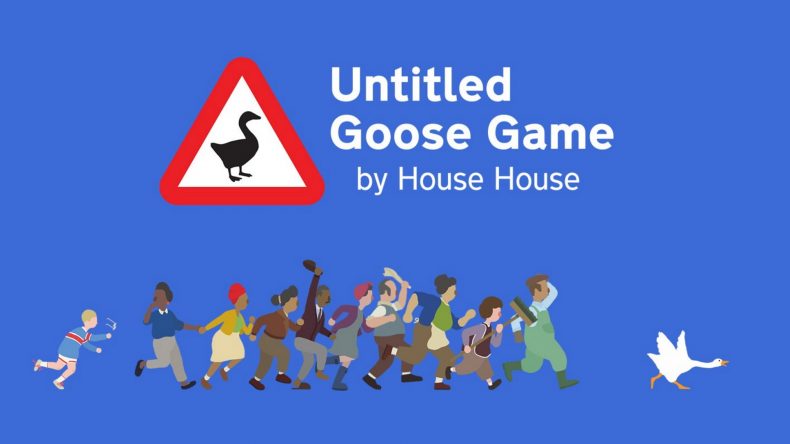 I’m not an evil person. Given the option in games, I’ll always be the good guy; the one that does things the right way and gets the good ending. It’s in my nature to be nice, and do right by other people. But despite that, even I cannot question the undeniable truth that being a little bit naughty is good fun. A little bit of mischief goes a long way if you bend the rules but don’t quite break them. As kids, my mates and I used to get up to all sorts of relatively harmless shenanigans. However, I haven’t really felt that adrenaline rush you get from doing things you shouldn’t for a while now. I’m older, potentially wiser, and I have responsibilities. Trust Untitled Goose Game to come along and remind me of the good old days.

Honking onto centre-stage comes House House, with a game that makes you waddle around pulling pranks in a local village, like some sort of feathered Dennis the Menace. As you venture through each area, you’re given a set of tasks to complete. Each one causes a little bit of mischief to the unfortunate villagers going about their daily life. The tasks could be anything from stealing a prize pumpkin, to scaring a young boy into a telephone box. Once you’ve completed enough in an area, you’ll get a final task to undertake. Once done, you’ll unlock a new part of the village for you to continue your honking antics in. Most of these tasks will require a particular skill you don’t tend to associate with geese, and that’s stealth. Many of the villagers will react to your presence if they spot you, thus preventing you from causing havoc. The key to victory is to understand your enemy. Thankfully the village inhabitants are both mindlessly inquisitive and anally retentive. Position yourself behind cover and do your signature honk, and without fail they will wander over to investigate the sound. This can be used to manoeuvre people out of the way, whilst you nip in and steal something, and run away without being spotted. The humans will also always return items to their proper place if they spot them strewn about thanks to your busy beak. Again you can use this to your advantage to distract them away from places you need to waddle to.

The key to this game’s success is its simplicity. From the easy to understand gameplay mechanics, to the well-explained and intuitive controls, Untitled Goose Game feels instantly accessible. Items you can interact with are clearly marked as you near them to help guide you. These indicators are kept discrete, so there’s no flashing exclamation marks or other distractions from the challenges at hand. Even the tasks you have to complete have a difficulty that ranges from the blindingly obvious to mildly challenging. You’ll never be stumped for long, and can instead focus on making the villagers rue the day you waddled onto the scene. The lack of challenge may put some people off, but most will embrace the experience for what it is regardless.

The plain and clean art style reinforces the simple life of the village around you. Its quaint setting creates the perfect blank canvas for your anarchy. This design choice makes everything instantly identifiable, perfect for when you’re on the lookout for specific items. Often there’s no time to window-shop if you’re being chased by an angry shopkeeper brandishing a broom. The ambient, mellow tunes that play as you explore often re-emphasise the serene setting. Those tunes turn more frantic however if your goose has been caught in the act, and needs to make a dash for cover. It’s a small point, but one that reinforces the thrill of the chase, and overcoming it. Untitled Goose Game is a fairly short romp, but here that isn’t the criticism it normally would be. Firstly, there’s actually a decent amount of content to explore even after the credits do roll. And the final task in the run-up to those credits is such a simple, but satisfying idea. It serves as a perfect finale to the stealth action that has gone before. But even if you ignore all of that, there’s a sense that the game never outstays its welcome. There’s no padding here, with each section providing enough varied locations and tasks to keep you occupied. Many more areas and the game may have gotten stale through sheer repetition, but what’s on offer here feels engaging, tight and entertaining to the end.

Perhaps most importantly though is the fact that Untitled Goose Game is just downright fun. It understands that being mischievous is gleefully enjoyable, and has no qualms in playing up to that fact. It succeeds in making you feel like your actions have an impact, even if that is just irritating the locals. Their reactions are overly-dramatic, but that just emphasises the humour this game keeps at its core. Running away from disgruntled gardeners or stealing something from under someone’s nose for your own purposes is constantly amusing. If beaks could smirk, then your goose’s would. Thankfully, you’ll be there with your own impish grin or childish laugh instead, having more of a blast than you have any right to be having. We often forget that games are supposed to be this fun. Let’s be thankful the goose was here to remind us.

Quite short
Lacks any real challenge

Untitled Goose Game is a lovely small package of fun. Being this naughty has never felt this good.