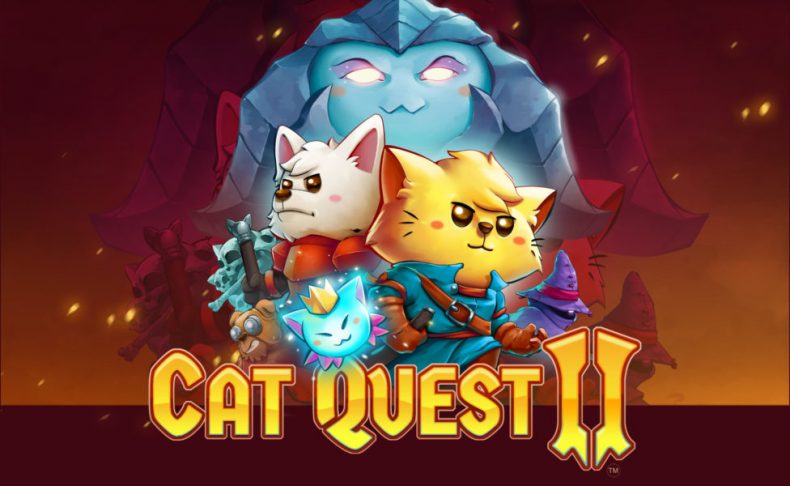 I was late to the party with the original Cat Quest, picking it up in a Nintendo Switch eShop sale for a few quid. I then played it for weeks, wondering why I waited so long to play such a paws-itively delightful game. Oh, get used to the animal puns, these games are full of them and this review will be no different. Cat Quest II follows the same gameplay patterns as the original, but adds a second character in the form of a dog. Not only does this allow for character switching, but your significant other can pick up a controller and help you take on the forces of evil.

The kingdom of Felingard and the Lupus Empire are both headed by evil rulers, and the real kings (our heroes) have been brought together to retake their thrones and free their respective lands from tyranny. Like the original game, the story is fairly simple but serves to push the action along purr-fectly. Alongside this overarching plot, there are lots of challenging and entertaining side quests, all with multiple parts and plenty of humour. On top of all these quests, you’re free to explore the two massive maps, taking in the various sights and battling the different creatures that attempt to block your progress. There are villages, towns and cities to visit, as well as caves, temples and dungeons to loot, sometimes featuring wave-based challenges that yield powerful rewards. The general gameplay hasn’t actually changed much, to the point that, at first, you could be forgiven for thinking that this is simply an expansion for Cat Quest, but the little changes that The Gentlebros have made really do offer a different way to play. Two characters make for even more frenetic battles, whether played alone or in local co-op. When played solo, the AI of your paw-tner (alright, I’ll stop) can be a little stupid, running directly into attacks and traps, but otherwise they’ll do their part to fight back against the increased number of enemies to accommodate the extra fighter on your side.

You can vary up the fighting styles of your duo too, thanks to the addition of new weapon types. Magic wands allow for ranged combat as you sling balls of elemental energy (such as fire, ice and lightning, depending on the wand type), while the other new addition of two-handed weapons let you deal more damage at the cost of some speed. I had my cat casting spells from afar, while my dog went rushing in with whichever blade or hammer did the most damage, and they made a fairly effective team. If one falls in battle however, all is not lost. You can revive your comrade and live to fight another day, and you can even heal them when you’ve unlocked the relevant spell. It’s surprisingly relaxed, with no time limit on reviving your companion. The Cat Quest games really are just about having fun, which you absolutely will.

Combat is as simple or complex as you make it, using one button for regular attacks and the shoulder buttons (I played using my Xbox One controller) for up to four different magic spells, the mana for which is gained through landing hits on your enemies. You also have a dodge roll, so when you see a red symbol appear beneath a creature, you best get used to rolling away from it to avoid harm. The roll can even be upgraded, as can almost everything in Cat Quest II, so that it causes damage when you roll through an enemy. That one was a lifesaver on many an occasion. There’s something quite cathartic about mashing away at the X button to throw balls of lightning, before hitting the left bumper to unleash a firestorm as you roll through a monster, damaging it even more as you escape its claws. That amounts to most of my time with the game when I wasn’t wandering the massive maps, and I honestly can’t fault it when it’s just as fun as it ever was. When I was wandering the two maps, I loved exploring every dungeon and cave that I could. Before entering, you can see the level required to take on each dungeon, so you don’t accidentally walk into the wrong neighbourhood. The same goes for starting any quest, as you will be told the level of difficulty before going in, and you can activate one of the tomes that appear once you begin a quest, should you wish to back out. Couple this with how quickly you level up and you can see that Cat Quest II is designed to be as accessible as possible. This makes even more sense when you realise that the game was also launched on Apple Arcade last week.

There is so much to love about Cat Quest II. From its simple and rewarding gameplay to its gorgeously animated visuals. Whether its the charming characters or witty humour, and all of those wonderful puns. It’s a game that feels immediately familiar, but it also feels fresh thanks to the addition of a second playable character and local co-op. Some may complain at how similar it is to the original game, but when you’re having so much fun that you find yourself grinning from ear to ear, who cares?

Put simply: Cat’s Quest II is the dog’s boll…you get the idea.

Full of great humour and whimsy...and lots of animal puns
Gameplay is incredibly simple and satisfying
Game world is roughly twice the size of the original game

Whether you play alone or with a second player, Cat Quest II is an outstanding action RPG with a great sense of humour.