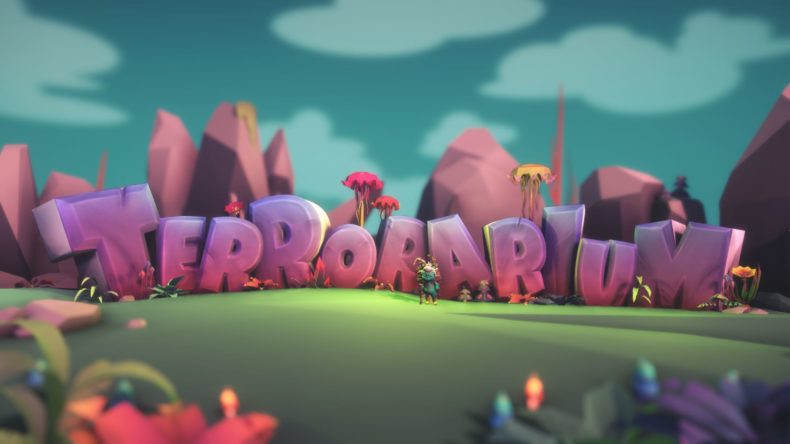 Decrying a game for being purely derivative of another, is often a dangerous and unfair path to tread. Not all games can be as revolutionary as Doom or Super Mario Bros. It’s narrow-minded to think that games with similar ideas are by default inferior to their source material. Being inspired by well-known favourites often allows us to explore new ideas in sometimes crowded genres. However, in the pursuit of these new innovations, you do often get a few sideways steps on the march of progress. And that’s what Terrorarium feels like to play. It’s not bad by any means and has a few ideas of its own. But it’s unashamedly a Pikmin clone, and it’s hard to shake that feeling, and not long for the original Nintendo franchise whilst playing it.

Step aside Captain Olimar, for now, you take up the role of the Gardener. She’s a disgruntled, old miser looking to create gardens of pure devilish horror. Using different types of her Moogu companions, she must navigate to the end of each level where a carnivorous plant is waiting to be fed your squishy friends. Only then will it relinquish its fruit and you are victorious. It means each level is not just about overcoming various puzzles but also about the survival of you and enough of your Moogu friends. Hopefully, by creating and overcoming such devilish arenas, will she finally achieve victory over her arch-rival Dolores, someone who she always seems to finish runner-up to. 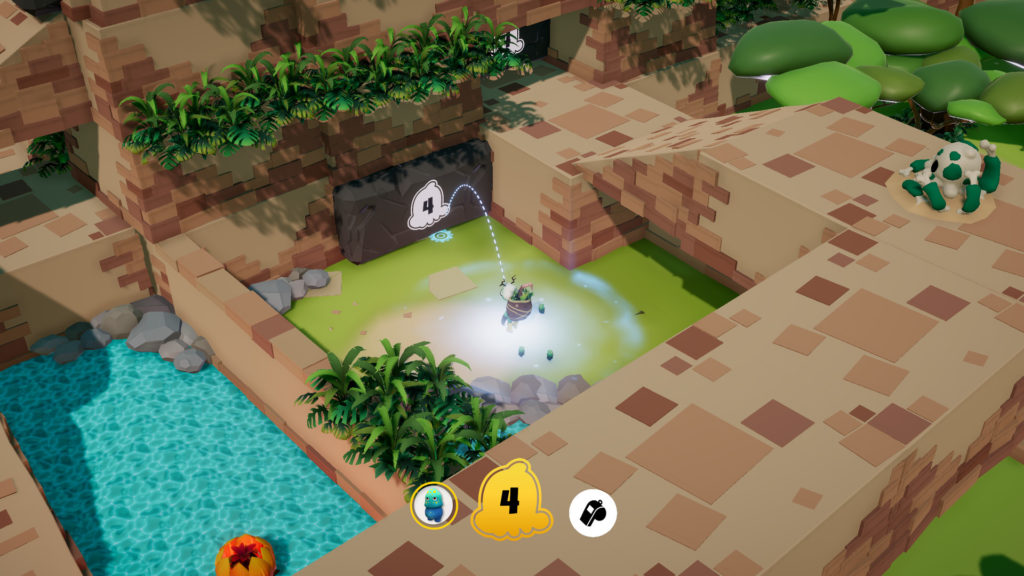 So, yes, it’s a threadbare story, but that doesn’t really matter. It certainly sets out the tone of Terrorarium, that is very much tongue-in-cheek, and almost slapstick in its comedy nature. It sits nicely with the simple polygonal design, with clear crisp edges and bright colours. The music is upbeat and lively, akin to a children’s TV show or a Pixar animation. It creates a wacky atmosphere that is only further exaggerated by the numerous enemies and obstacles that you must overcome, such as vicious plants, bugs, and even killer rolling cabbages in serious need of eyebrow threading. Yes, really. It’s bonkers, and isn’t afraid to dial the nonsense up to eleven. Indeed the result is something that in setting at least, feels like a far cry from the serene, almost picturesque setting of the Pikmin franchise.

But after only a few minutes of play, things will feel very familiar if you’ve played Pikmin on a Nintendo machine previously. Tactful use of your Moogu is the order of the day to overcome obstacles, as well as keeping them from harm. They can’t swim but can weave through spikes. You as the Gardener can do the opposite, and so a combination of basic wait and follow commands will normally see you through. There are also platforms that respond to the weight of certain Moogu, as well as structures that can be defeated by a certain number of Moogu hits. So tactics are elevated to make sure enough Moogu survive the perils to get you to the end. Different Moogu are unlocked as you progress with different attributes such as Fire Moogu or some incredibly sticky ones too. Switching between them is the key to success. 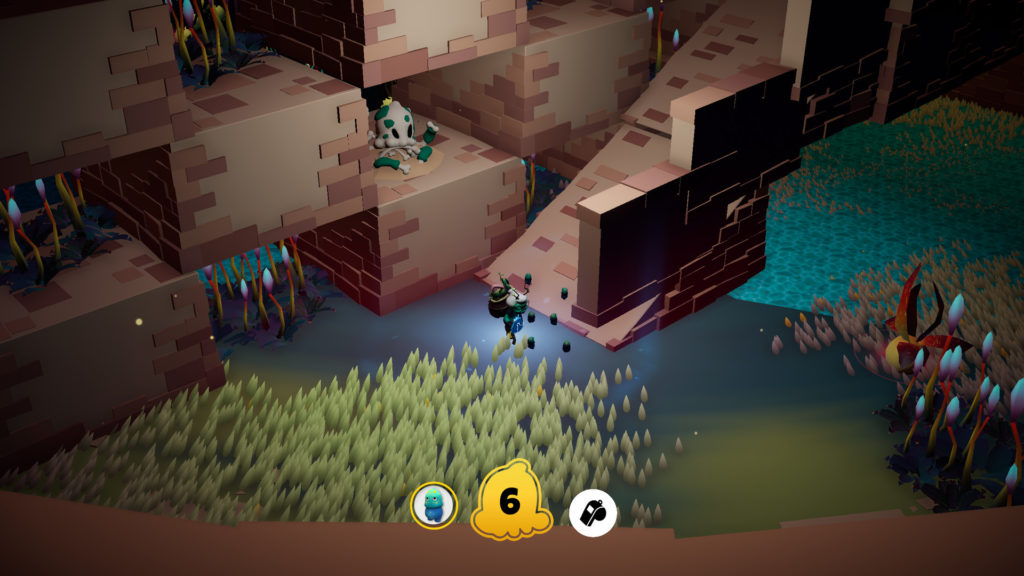 This, I’m sure is the intention, but the execution doesn’t quite hit the mark, often leading to frustrating failure that isn’t always the fault of the player. Terrorarium’s design seems at odds with itself which drags the experience down somewhat. Firstly, you don’t ever have direct control over the movement of your Moogu. They sort of follow around you in this sort of aura that surrounds you, which they must largely stay in to survive. And not being in direct control throws up a lot of the challenge in some levels. Keeping them in the aura through walls and other dangers is equal parts fun and taxing, and is used to great effect as you make your way through certain areas.

But whilst it works in that example, in others, it frankly doesn’t. The lack of Moogu control is incredibly frustrating given you’re often asked to traverse relatively narrow raised platforms or paths through treacherous terrain. I’ve lost count of the times I’d be walking fairly centrally through an area, only for Moogus to seemingly throw themselves to their death in a sort of kamikaze two fingers up to me and my gardening plans. Failure through my own incompetence I can accept, and indeed I did fail often in my pursuit of the fruity goals at the end of each stage. Having to stomach numerous retries because the game design isn’t quite up to scratch is another thing entirely. 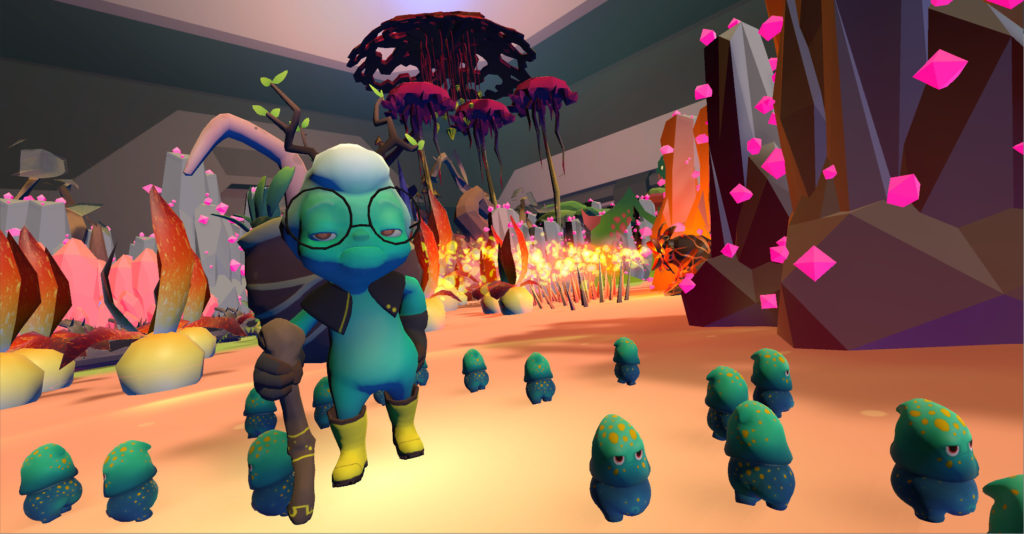 And sadly, it is the game’s design that is the problem here. The decision to make this not only a puzzle platformer, but a level creator as well, is what has caused a lot of the unnecessary issues. Having all the terrain and enemies pulled from a finite toolbox that you can recreate at your leisure, has unfortunately restricted the freedom of level design. It’s a nice touch that you can literally recreate the levels and tweak and design your own fiendish challenges for your friends. And this is very much in keeping with Terrorarium’s narrative too. But, the end result though feels a little clumsy, as often materials are limited, and often don’t “lock” together as they should. Walls and corners aren’t finished cleanly, and there’s even the chance to wander into unintended off-limit areas thanks to some funky collision detection. A lack of a world-building tutorial can also make you feel overwhelmed with where to start.

Terrorarium has bags of swagger and style and is clearly banking on its level creator to add longevity. It’s even drafted in some design students to submit levels so there’s already some additional content good to go at launch. But even these highly skilled designers struggled to overcome the fiddly controls and clunky aesthetics. The creations’ ideas shine through, but lack the finesse and polish you would expect from the likes of say Mario Maker 2. It’s certainly not a bad game, getting most of the basics right, it’s just more often than not you’ll be left wanting, because other titles just do it that little bit better.

Terrorarium borrows heavily from other larger titles, and due to poor execution and lack of polish, never really steps out from those shadows