previous
Destroy All Humans! review
random
next
Terrorarium review
1 like 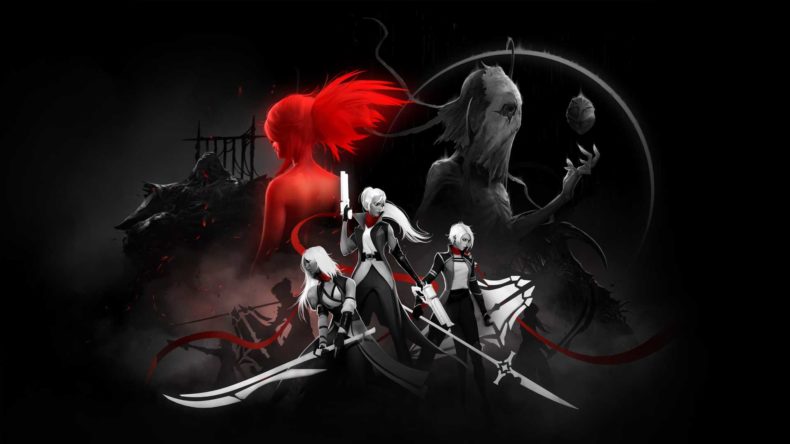 I can’t tell if Othercide is an allegory or not. Part of me thinks it must be, as your overlord-like Mother is defeated in the opening scene by The Child, a corrupted vessel she once loved. He is in the grip of the Suffering, a mysterious malaise that distorts all it touches. To fight it, the Mother sends her Daughters, white-haired chosen ones who must put an end to hordes of nightmare creatures and depraved bosses such as the Surgeon, Deacon and Maid. I’m no scholar, but I’m pretty certain all this fits nicely as a metaphor for a frantic mother desperately trying to heal her dying child.

I could be wrong, of course, but even picking apart the flavour text reveals clues to this end. If I am right, then I’m a little more impressed with Othercide’s world, even more than I already was with the atmosphere and artwork. It’s a stunning universe, dripping with macabre menace like a viscous toxin on the tip of a blade. Shades of grey clash with sharp shocks of brilliant red, and each of your Daughters is beautiful, elfin, yet as deadly as the Plague itself. 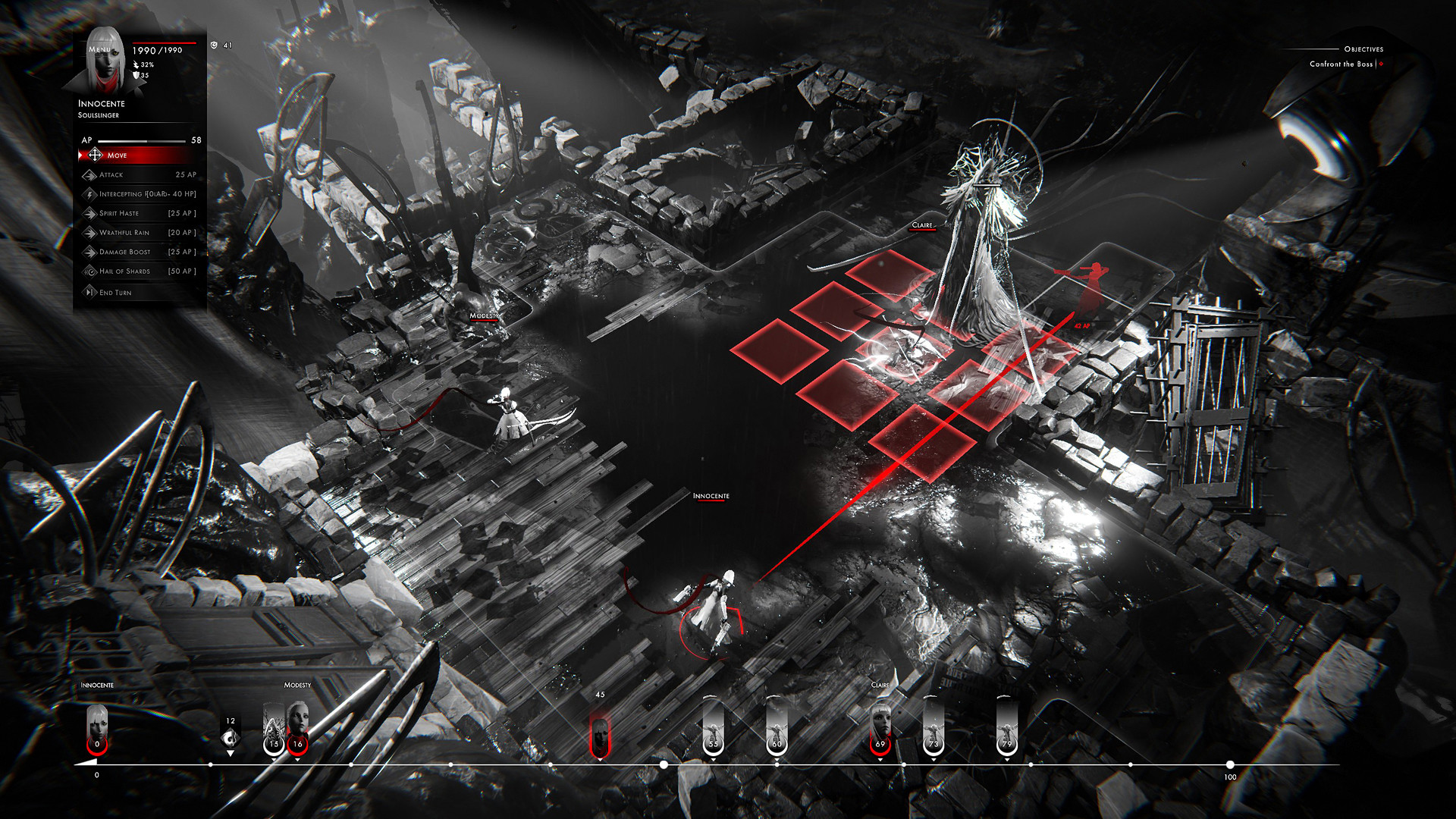 At surface level, Othercide shares similarities with XCOM. It’s an isometric turn-based tactics game, but it cross-polinates its DNA with other titles and genres, most notably Bloodborne and Dead Cells. From the former it takes its world: a gothic, Victorian-era city in the grip of a nightmarish disease. From the latter it takes its punishing design, forcing you to inch forward a little at a time, each failure leaving you with none of your upgrades but some of your unlocks. You’ll advance through Eras, which are split into Days, each containing a selection of Synapses that lead to a boss on Day 7. Each Day you must complete at least one Synapse in order to rest your Daughters so that they can fight again.

Like a roguelite, Othercide expects you to fail, and you most certainly will, many times. Your army is made up of Daughters, ashen-haired warriors germinated by the Mother to be set loose upon the minions of evil. Initially they come in three classes, each spawning with randomised looks, stats and personalities. Blademasters are defensively weak but offensively strong; Soulslingers come armed with twin pistols and heightened agility; and Shieldbearers act as tanks, soaking up damage and throwing themselves in harm’s way to protect their sisters. Combat takes place on a dynamic Initiative timeline, which determines in which order you and the enemy will move.

Every few levels you’ll be given a binary choice of which new skill to unlock, and deciding which works best is as much about your other Daughters as it is about the one you’re upgrading. There are four types of skill in Othercide: instant actions are just that – abilities that trigger as soon as you hit the Spacebar (or A/X on a controller). These are usually high damage attacks or evades. Then there are Delayed Actions, which will trigger a little way up the timeline. Reactions are skills which will only trigger as a result of another action taking place. And finally there are buffs and debuffs that last for a set amount of time. These skills, used correctly, allow you to stack up combo attacks for massive damage. 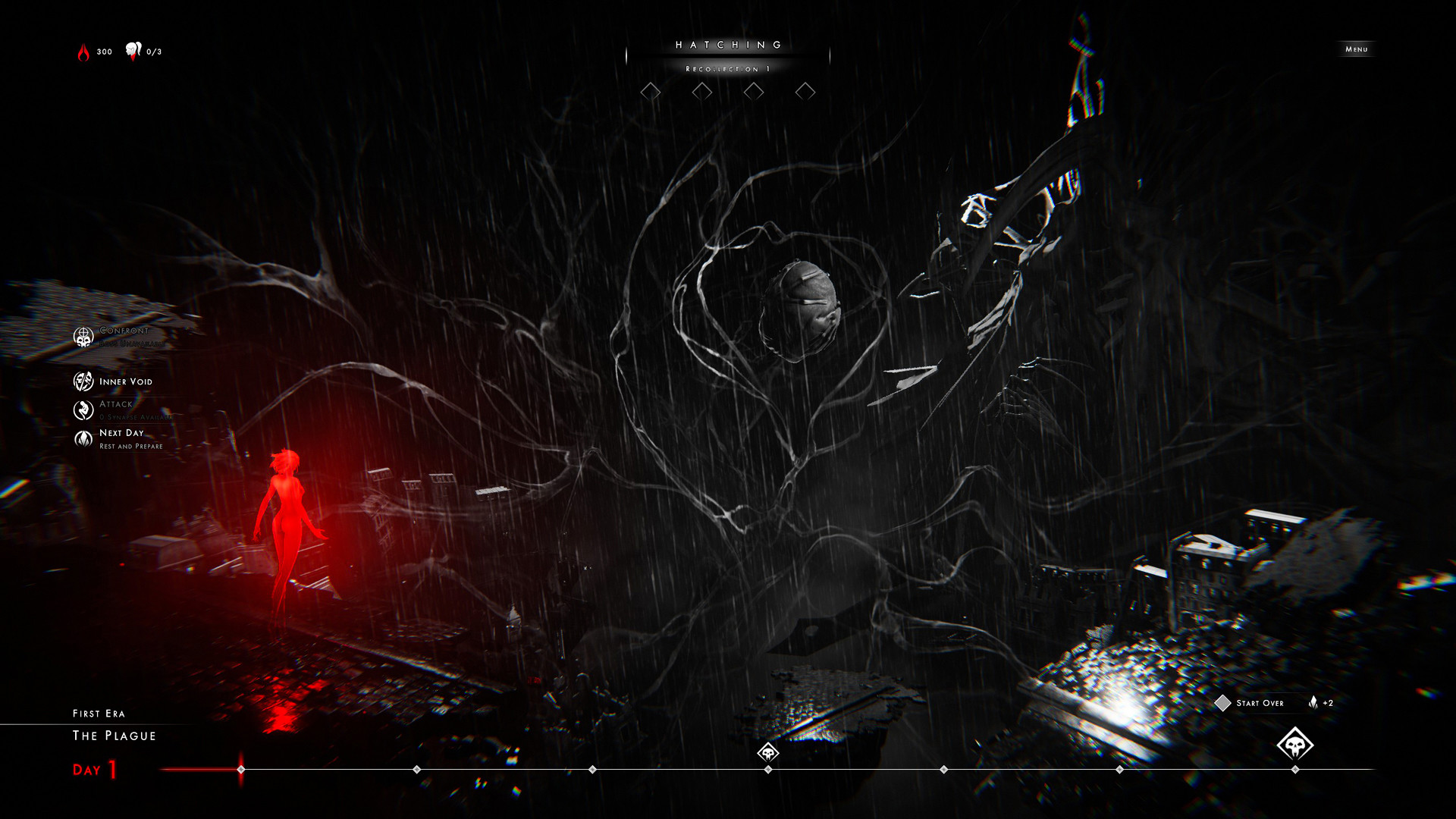 As a brief example, you can activate a Reaction on your Soulslingers called “Intercepting Shot” which will shoot any enemy in range who attempts to attack one of her sisters. Or Shieldbearers can use the “Saving Grace” attack to switch places with another Daughter and absorb the damage while returning her own. The downside to the Reactions and buffs is that they cost 5 or 10% of the Daughter’s remaining health to activate, and healing has a price of its own.

Because each run is designed to be a fight to the death, there are no curative items or skills in Othercide. Instead, the only way to heal one Daughter is to sacrifice another of equal or higher level. When you do they’ll usually absorb a portion of their sister’s soul, gaining higher attack or defence, maybe greater initiative, but it can be a hard choice to make, especially when you have two high level daughters and both are wounded. But, as the game tells you, one dead Daughter is better than two. You can resurrect the dead at the cost of a hard-earned token, and it’s worth doing so, as Daughters gain stackable Traits the more they fight.

A Daughter who repeatedly takes no damage may become Arrogant, earning less XP but doing more direct damage. A Daughter who kills many enemies in one Synapse may become Aggressive and dealote critical damage. A third who evades an enemy can become more agile, and so on. These Traits help shape your Daughter’s into powerful warriors, but the road there is a long and arduous one. 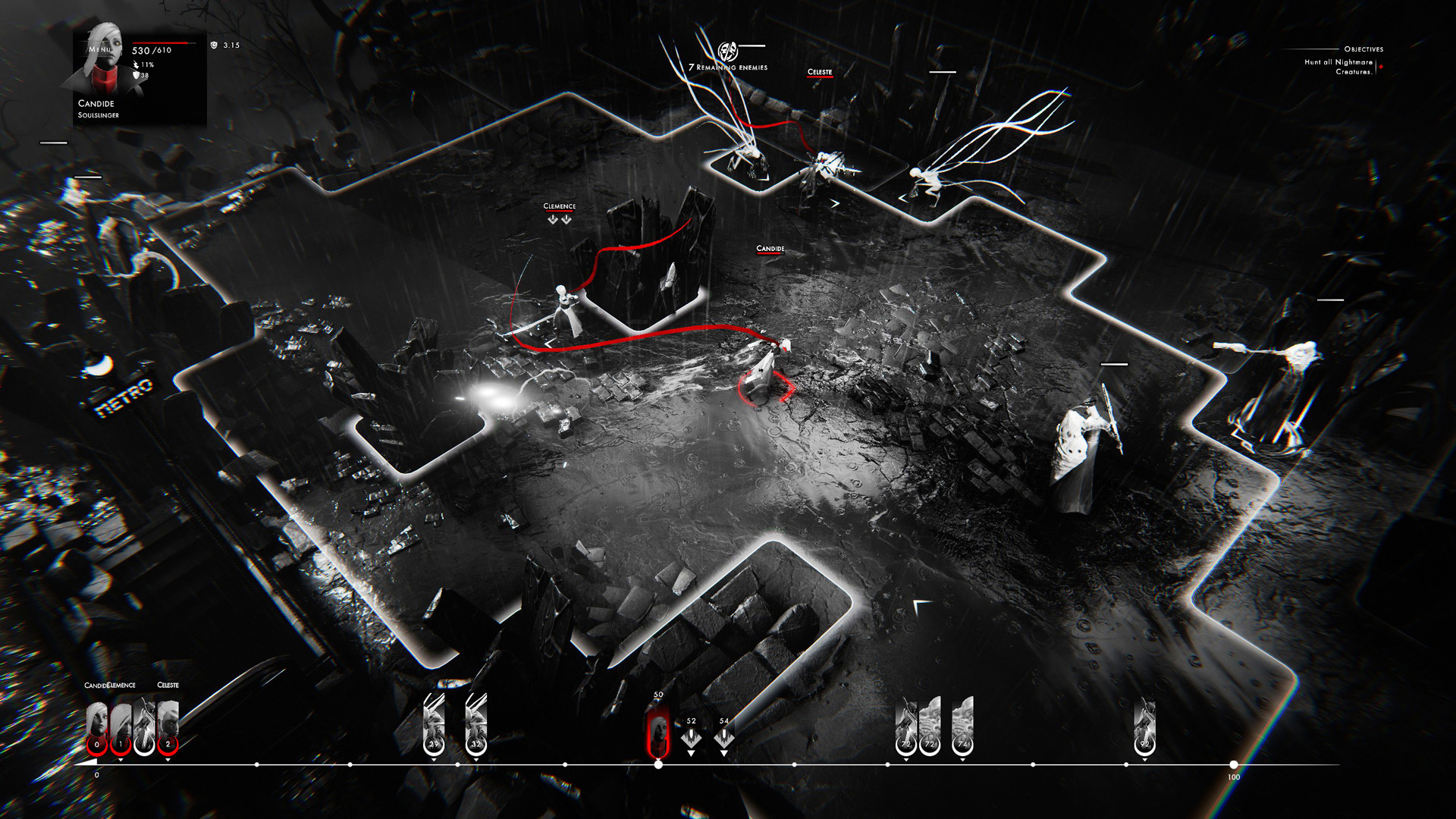 Othercide is damn hard. I’ve played some of the toughest games in recent years and pushed through them, but Othercide has given me some serious problems. For a start, it’s in a state of permanent “Ironman”, and every action instantly saves so you can’t reload if you fail. You’ll unlock Memories that can be assigned to skills to add attributes like increased damage or reduced mobility, but they reset at the end of a run. Remembrances, on the other hand, can be unlocked at the start of each run to grant things like a Resurrection Token, increased damage, Daughters that spawn at a higher level or, crucially, the ability to skip to whichever Era you were playing in when you died.

If it sounds complex, that’s because it is. Othercide is systems on systems, with random number generators operating behind the scenes and a mesh of different currencies and unlockables to get your head around. And on top of this, it’s punishingly difficult. The bosses in particular are massively powerful roadblocks that will take multiple attempts and a high understanding of the game’s systems to beat. The second boss in particular felt unfair to me, until I realised that a) I was supposed to tank him while chipping away at his health and b) Othercide wants you to grind. Admittedly there is an option to play everything at double the speed, which is great for certain missions like Survival or Rescue where you’re having to wait for huge queues of enemies to do their business.

Any game that displays its mission-specific difficulty as “Challenging, Hard or Impossible” is clearly playing for keeps and Othercide doesn’t mess around. Missions like the aforementioned rescue see you escorting and incredibly fragile “Bright Soul” through a small army of cultists and beasts, while in Ritual missions you’ve a set time to kill off a particularly powerful entity before it nukes the map. In Survival, you simply have to stay alive until you’re given an exit, and then get the hell out of dodge. 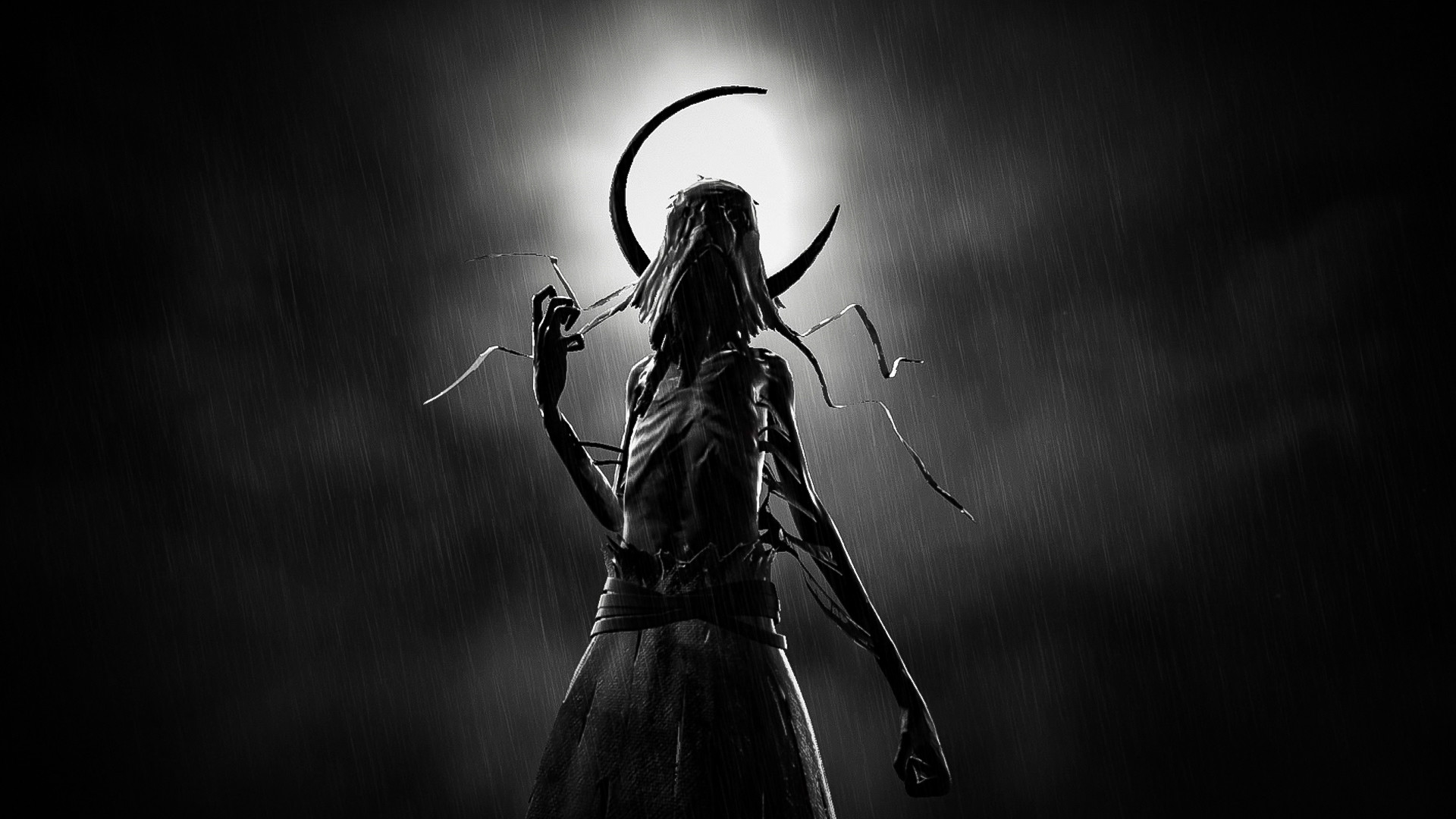 When you fail, your Daughters go to the Cemetery and can be resurrected with their Skills and Traits intact. Using Tokens to bring them back allows you to grind XP, making the toughest few stronger in preparation for facing off against the boss. At times it feels unfair, as there are certain mission types where enemies will spawn endlessly until you reach the objective and one mistake can cost you dearly. The grind to the boss can become repetitious when you fail over and over, and there were a few times when I just had to stop playing and walk away.

Technically it performs very well on PC with a few issues. The first is that sometimes the movement grid is temperamental, and will take a second of faffing around to let you move a Daughter. I’m also not overly impressed that the Mother has but one verbal response to each action and will repeat them endlessly throughout the campaign. The atmosphere mostly makes up for it though, thanks to the gorgeous visuals and incredible musical direction.

If anything Othercide will put people off with its difficulty. This is a hardcore game built for people who want a serious challenge, who like to play tactics games with Ironman Mode and permadeath enabled. It’s a testament to Lightbulb Crew that despite my frustrations and occasional rage, I didn’t give up. I wanted to learn the secrets of the world, I wanted to heal the Child and save the Mother from her pain.

It’s hard not to care about your Daughters, watching them become bruised and bloody with each fight survived, seeing their expressions become more hollow and wretched as you sacrifice their sisters to keep them alive. You can name each one, and as they develop Traits and grow you will slowly become attached. It doesn’t have the same affect as in XCOM where you can customise and build your soldiers, but it’s effective nonetheless.

I can’t recommend Othercide unless you like your challenges steep, but if you do then it’s an absolute corker. There’s great depth to the character development, while the upgrade systems work very well together once you get your head around them. Don’t go in expecting to play a straightforward XCOM-clone, though. Othercide deserves much more than that.

Othercide is damn hard, but if you can push through and find your feet, it's also an incredibly satisfying and atmospheric experience. Whatever you do, don't go in expecting to play a straightforward XCOM-clone. Othercide deserves more respect than that.