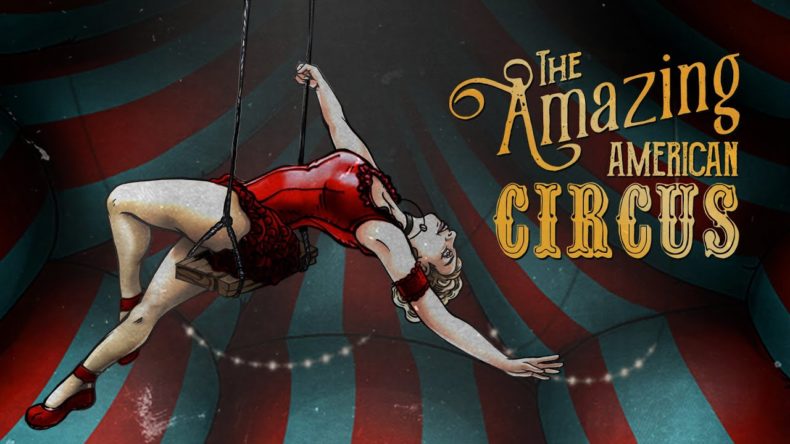 It’s been a few years, but I love going to the circus. Walking into the Big Top is just a magical experience, with the smell of popcorn and the excitement of the crowd. Whether there to watch a trapeze artist soar through the skies or a skillful juggler throw burning sticks around, I’ve never left a circus feeling disappointed. Throughout history the humble circus has entertained the masses, but we’ve come a long way from Freak Shows and lion taming. The Amazing American Circus celebrates the wild past of these great variety shows, in a truly unique deck building management game.

After the funeral of your father, you find out that the once great Jones Circus has been passed down to you. Well past its glory days, the circus is down to its last 3 performers and hasn’t been popular in years. After some protesting from your uncle, you are finally convinced to try and revitalise the show when he mentions an upcoming circus tournament with a $100,000 cash prize. With only a limited time to become the greatest and most entertaining troupe, you begin a cross country adventure to gather fame and experience.

Each town you set up camp in is expecting a show, and it’s up to you to entertain the punters. After selecting 3 performers, you’re dealt a hand of cards of tricks they can do and need to use them to impress the crowd. A card’s impress value will deal “damage” to a crowd member, and if you impress them enough they’ll sit down. Until they settle down and watch the show though they’ll attempt to distract your team, and will sneer and heckle at your poor clowns and jugglers. Too much heckling will drain their focus, and they’ll start losing tricks and eventually be unable to perform at all. As well as impressing the crowd, you have cards that help you ignore any incoming insults (which works like blocking) and continue the show. 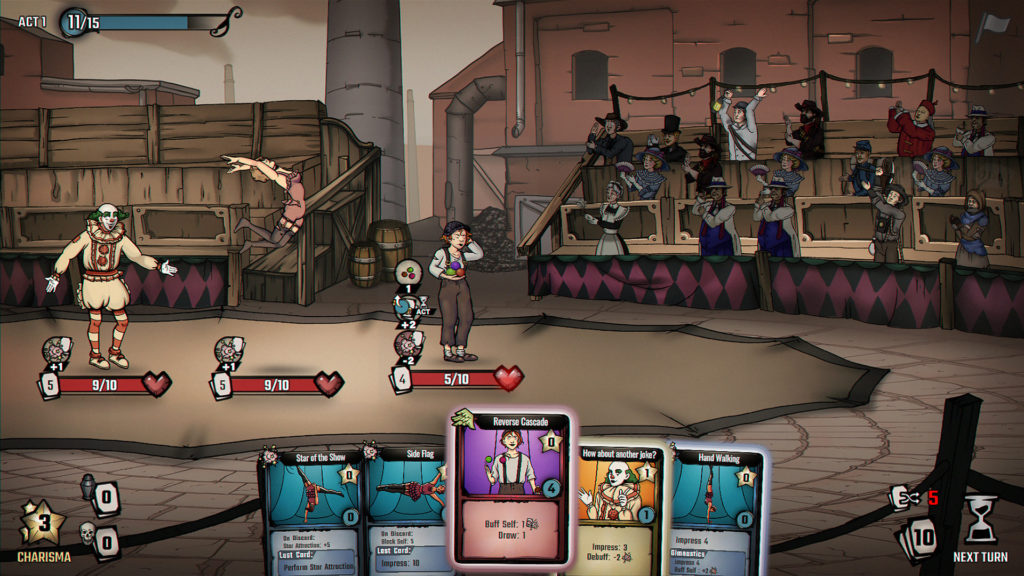 To decide how to spend a turn, you’ll need to take a lot into account. Each card has a cost to play, and either fills or drains your finale meter. Sometimes it makes sense to just send the crowd home happy as fast as possible, but in some situations defending yourself and saving for a big puma based finale is the right decision. Don’t take too long though, because every time your deck is empty your team will lose a lot of focus to reshuffle it.

There are plenty of performers to recruit on your tour, with completely different spectacular abilities. The juggler stashes balls as they perform, ready to unleash them for a really impressive finish. The aerialist swings from her hoop to please the crowd, and if she hasn’t lost any focus yet will be extra impressive. My personal favourite was the Face Changer, who has cards that flip over to do something completely different after each use. 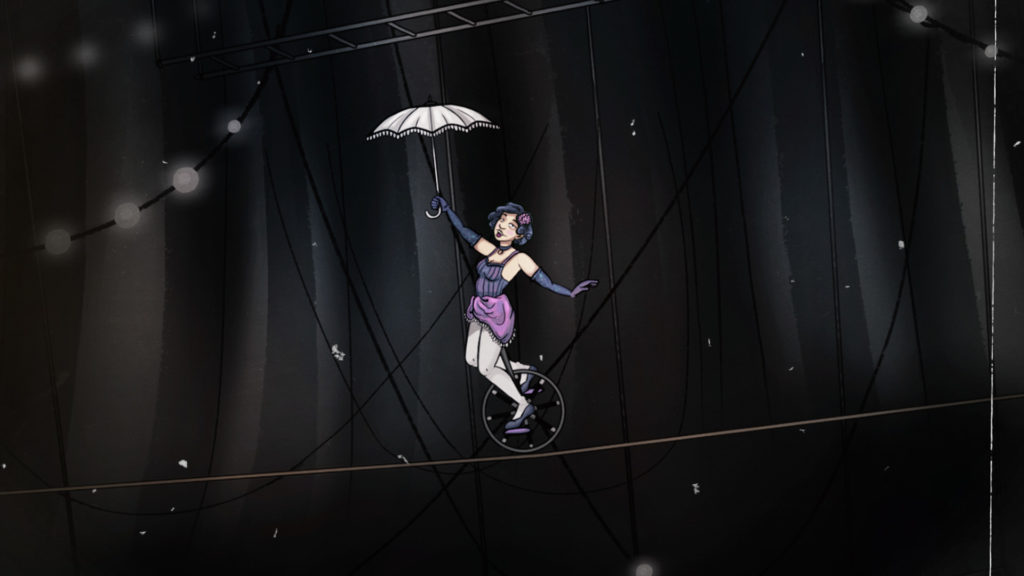 As they perform more your performers level up you’ll be able to improve their cards. Each of your cast can have five cards, and leveling up will either upgrade one, or give you an entirely new card to swap out. It’s a pretty small deck building element, but makes a big difference when deciding who to send out into the limelight.

The card “battles” are actually a fairly small part of The Amazing American Circus, because it turns out a lot goes into managing a show. There are dozens of potential ways to upgrade your show, from making your tent bigger so you can fit more people in, to adding extra rerolls to your leveling up. The sheer amount of systems to keep on top of is a little overwhelming to begin with, but once it clicks you’ll be the perfect ringmaster.

I ended up spending most of my ticket money in the Voodoo tent. Your performers will acquire quirks as they are sent out onto the stage, and usually they’ll be negative. Dealing with all that heckling is stressful, so they might take extra damage on the first turn, fill up the finale slower, or struggle to ignore sneers. The voodoo tent lets you remove these negative status effects or lock in the rare positive ones for a nominal fee. 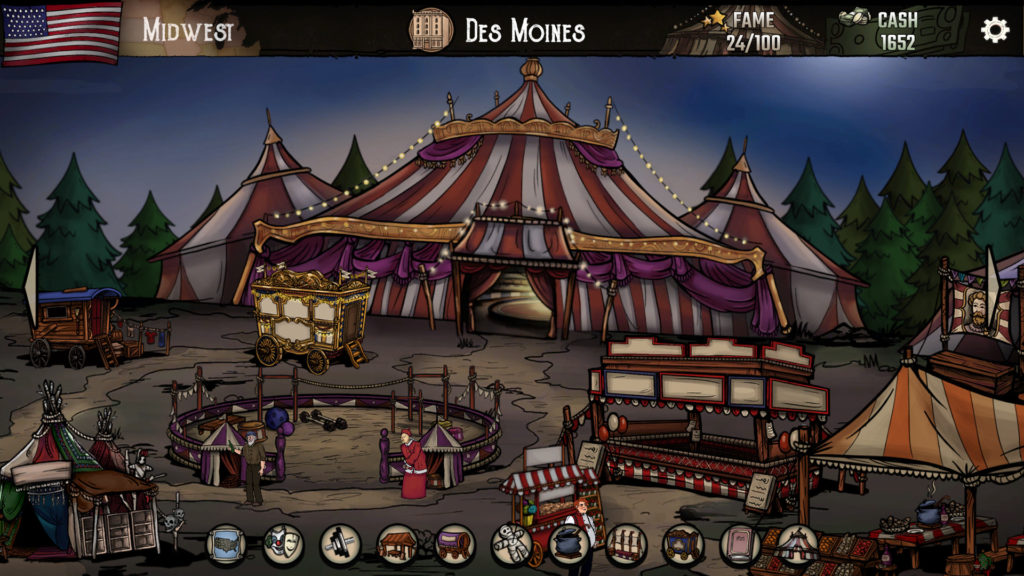 Make sure you don’t spend all your money on fancy upgrades and voodoo trickery, because taking a show on the road in an expensive endeavor. You’ll need to make sure you bring enough food for your crew to scoff en route, with better meals building up meters that apply some positive effects to your show. It’s worth investing in a few sandwiches and portions of soup to fill up your finale meter at the start of a performance.

You can choose any order to visit the cities of America on your tour. As you travel the roads random events will occur, and you’ll need to make the decisions that strengthen your troupe. Maybe a friend of your mime wants to tag along with the crew, upgrading the mime’s cards but costing you more in food. These tough calls can potentially make or break a run. 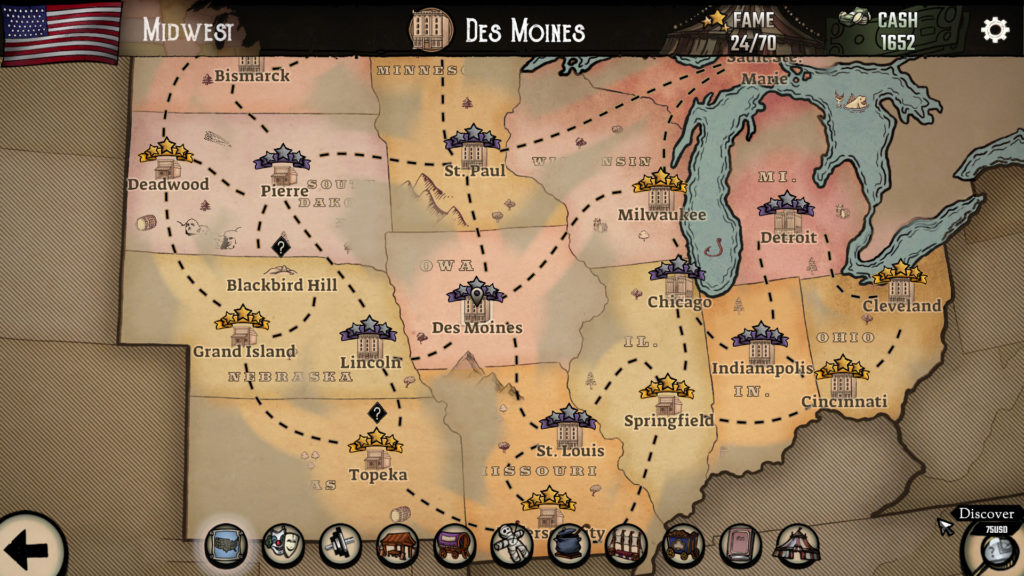 The Amazing American Circus is an unquestionably deep game, with plenty of systems I haven’t even mentioned in this review. You’ll sometimes get side quests to complete, you can find new cities by paying to scout out an area of the map, and there are tons of different status effects and crowd types to deal with. All of these different aspects of the game are perfectly incorporated into the circus theme too, making the whole package just incredibly charming.

The Amazing American Circus blends deck building and show management to create a truly unique experience. Using performances as a substitute for combat is really clever, and upgrading your circus and team members is really satisfying. It can be a little overwhelming to begin with, but once all the systems click you’ll be walking the tightrope that a successful ringmaster needs to.