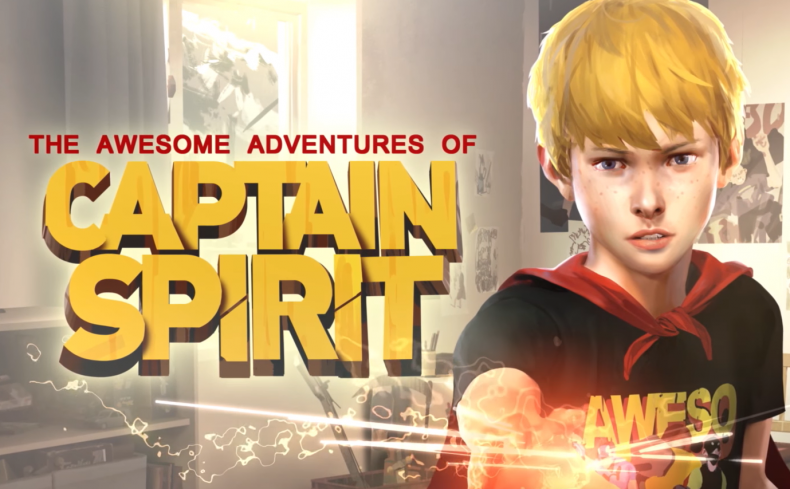 Life is Strange 2 isn’t far off, and as a teaser French developer, DONTNOD has given us a taster in the form of a short, playable introduction to some of the characters and themes that will be in Life is Strange 2. Titled, The Awesome Adventures of Captain Spirit, this short episode follows the adventures of a young boy with an active imagination as he spends a wintry Saturday morning playing and amusing himself.

“Captain Spirit” is a young boy called Chris who lives with his father in a modest bungalow in an unnamed place, however, through discoveries you make while playing there are various links to the universe that Max and Chloe inhabit with references to the Blackwell Academy where Max’s powers first manifested themselves. Chris is desperate to be a superhero and fantasises about being one throughout all his interactions. We first see him playing in his bedroom, he is drawing his alter-ego Captain Spirit and through a few player choices you get to decide what he looks like. Does he have a mask? What colour is his cape etc.? Chris is a boy with a very strong imagination, his room is littered with his drawings of his interactions with the various villains from his stories, including the dreaded “Snowmancer,” a snowman that he has crafted in the back garden outside his bedroom window, and the much feared “Water Eater” which is the boiler that services the house. The first few moments with Chris playing in his bedroom seem at first glance like a normal ten-year old’s interactions, but there is a strong sense of sadness and loneliness that permeates throughout the scene. Passing references to the drawing skill of his mother to the broken promises of his father not fixing a damaged games console suggest there is something else going on in this household that is fuelling Chris’ fantasies.

After wandering around his room for a little while, interacting with his toys and drawings, the voice of his father calls to tell him his breakfast is ready. It is at this point that the real monsters in Chris’ life become apparent and they are not confined to the likes of Snowmancer or the Water Eater, but rather they manifest in the form of grief, the disappointment of unfulfilled dreams, guilt, neglect and alcoholism. Chris’ father is a drunk, the kind that is “only going to have a few beers watching the game,” who asks his son to fetch him a beer, and who then falls asleep in his chair leaving his ten-year old son to clear up, do the laundry, and restart the water heater. Chris doesn’t have to do these things, you can choose not to in the options that come up, but for me it felt more authentic that he does do them, painting a picture of a child that has had to grow up very, very quickly. If you do choose to carry out the household chores, Chris imbues each action as another adventure as Captain Spirit. The felling of the dreaded Water Eater transforms from a simple task of switching it on to a battle of wits where Captain Spirit must summon all of his powers to defeat his foe.

There are flashes of care from his father. As Captain Spirit, Chris has the power to “bend all matter to his will” which is, of course, just another childish fantasy, but his father plays along with good humour providing us with glances of what life used to be like before the unspoken tragedy that hit the family. The game then, is a process of helping Chris to navigate through his day with the looming presence of his father with a temperament like quicksilver, at once loveable and affectionate, the next angry and cruel. You can wander around the garden and home with Chris; in your inventory is a piece of paper with the drawings of all the “Cool adventures for Captain Spirit” to do on it, and you can choose to do none or all of them. The tasks include things like shooting at beer cans with snowballs, defeating Snowmancer, or climbing up into his headquarters, a rickety looking tree house in the back yard.

The Awesome Adventures of Captain Spirit is a self-contained piece of interactive narrative that certainly seems to capture the essence of a tragedy that has befallen this family. Both Chris and his father are utilising different coping mechanisms for their grief – Chris retreats into fantasy while his father more ominously seeks solace at the bottom of a bottle. It isn’t clear throughout the two hour running time if the sequel, the first episode of which is due for release in late September, will feature Chris, but I really hope it does. I’m invested in what happens to this sad little boy and his struggling father, and whether both of them can overcome their deep sorrow.

The Adventures of Captain Spirit is an interesting way to generate interest in the Life is Strange sequel. Chris and his alter-ego is a likeable little boy trying to navigate a childhood filled with both imaginary and real-life monsters.

You may also like
Dontnod EntertainmentThe Awesome Adventures of Captain SpiritPC