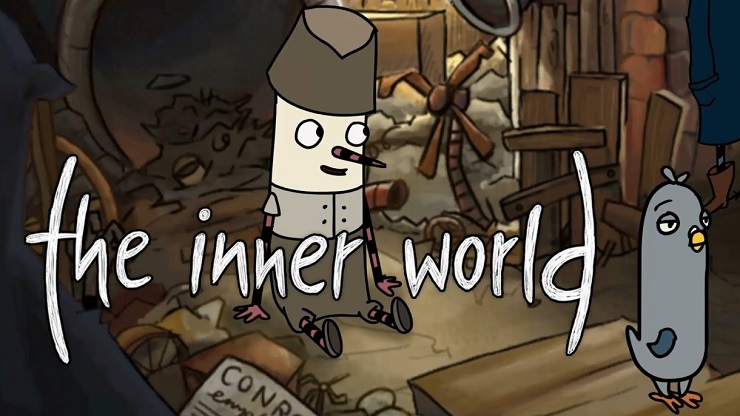 The Inner World is a weird game. There’s no getting around it. The world is filled with odd creatures and the plot literally begins with your character, Robert, chasing a pigeon, because it ate his master’s medallion. Yep, you read that right. Oh, it gets weirder than that; when your master, Abbot Conroy also sends a violent hedgehog after you. A guy’s gotta protect his interests, I guess.

Conroy is basically a tyrant masquerading as a religious figurehead, with Robert being a naïve young orphan that has been conditioned to believe Conroy is a good guy. Robert also happens to have a flute for a nose (I told you this game was weird), which Conroy wants to keep hidden, for Robert’s “safety”. Yeah, right.

There’s a really deep and interesting history to the world of Asposia, The Inner World’s setting, and it unfolds slowly throughout the game. There are different classes of people from a multitude of fictional races, not to mention different animals and beasts – including the much-feared Basylians. These monsters turn people to stone and Conroy has convinced the people that it’s due to something they have done, which helps to keep him in power. It’s a very intriguing world, and quite dark for such a comedic game. But how does it play, you ask? It’s a point and click game, much like the original Broken Sword games and classic LucasArts games of yesteryear. Only, without a mouse, the left stick controls Robert directly, moving freely about each beautifully detailed scene. But interacting with these scenes becomes a bit of a faff, as you can’t just press an action button when you’re near something of interest, you have to use the shoulder bumpers to cycle through all available interactive items. Once you’ve found the item you want, you then press A to bring up a little menu, which allows you to choose whether to look at it, interact with it/talk to a character, or combine an item with it. It’s a simple enough process, but it can sometimes take a moment to cycle to the right thing.

As with many point and click games, it requires you to solve a few puzzles, usually via finding the right combination of items in your inventory, or using the correct item on a certain person or object within the environment. Unfortunately, like some of the older, more obtuse games in the genre, The Inner World’s logic isn’t exactly…logical. Some of the puzzle solutions require such bizarre item combinations that, frankly, most normal folk just won’t see. This includes myself, which means that you’ll likely end up resorting to that age old method of combining anything and everything in your inventory, until you stumble upon the answer. But the game’s humour does suggest that Studio Fizbin may have intended it to be this way, as incorrect guesses sometimes result in Robert flatout accusing you of guessing. “That was a guess, wasn’t it?” He’ll say. That’s definitely one of the best things about The Inner World, and one that kept me playing despite the awkward controls and some obtuse puzzles; the humour. The writing in general, actually. Every character has their own agenda and genuinely fits in the world, including the crazy child that either has a very overactive imagination, or is actually a sociopath. It’s rare that a game has me laughing out loud, but The Inner World has such a great sense of humour that it just got me. Even during some of the more serious scenes, of which there are a handful dotted around, there are some great one-liners to help break the tension.

Asposia and its inhabitants are beautifully realised too, with some gorgeous background artwork behind the smoothly animated characters. It reminds me of hand-drawn cartoons of the eighties and nineties, with its rough edges but great attention to detail. There’s a real charm to it, almost like Tim Burton’s work circa 1994, before everything he touched turned to shit. Even the design of Asposia’s inhabitants is Burton-esque, none more so than Robert himself, with his flute-nose and his oddly-shaped figure. The only time the visuals let it down is during the scripted scenes, when the camera zooms in, and the backgrounds are revealed to be quite low resolution in comparison to the sharpness of the animated characters. It may be picky to single that out, but it is quite noticeable. It does have a specific bug that rears its ugly head at different times throughout the game, too. At a few points, the controls didn’t seem to respond, but upon pressing the hint button (which highlights all available interactive points on the current screen), it allowed me to select the last item and examine it, which returned everything to normal. Hardly game-breaking, but it’s certainly an annoyance, especially when it happens multiple times during one short sequence of events.

With one or two minor issues, along with a few too many silly puzzle solutions (seriously, some are just so random it borders on the ridiculous), The Inner World falls short of greatness by a reasonable margin. Thankfully, its story, characters and writing are all brought to life by a wonderful combination of quality animation and fantastically dry voice acting. I can’t speak highly enough of the voice acting, it really is spectacular. The sound in general is top notch, with a score that wouldn’t be out of place in a Disney movie or something. Wonderful stuff.

The Inner World isn’t perfect. It isn’t even a brilliant game, it’s simply a fun story wrapped up in a good game, that unfortunately makes a few mistakes synonymous with its genre. But don’t let that put you off.

Despite a few illogical puzzles and poor controls, The Inner World’s writing shines through to create a decent, amusing adventure.

The Inner World Gets New “Features And Robert” Trailer For Switch