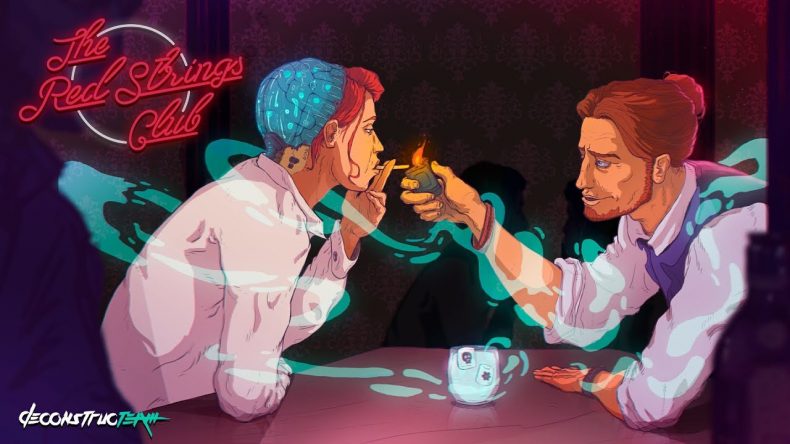 Depression is something many people have to live with, and suffering with it is what many do in silence. Imagine if there was a way to stop it from even existing? This is the premise that The Red Strings Club presents: a Mega-corporation called Supercontinent is planning to release software that will not only create happy feelings in the wearers of their implants, but in non-implant users too.

There are a lot of questions to ponder here, such as whether this is morally or ethically correct on a societal level. At what point does the erasure of your negative feelings stop you from being you? Are there any morally grey areas here that this potentially falls into? Deconstructeam approach this in a pretty blunt way, making you question whether too much erasure of the world’s ills would mean the world would almost cease to be. This is a short game and essentially falls into three segments. The first casts you as the bar-tending information-broker Donovan, a man who uses his innate skills with alcohol to create drinks that can influence the moods of his patrons to extricate information. There are four base drinks: Tequila, Bourbon, Vodka and Absinthe, and two more that are introduced later along with a mixer, just to complicate things further. This early segment is easily the most fun to play through, with the responses to certain questions changing considerably depending on what mood you’ve created in the individual. Playing upon their mental state and getting them to unwittingly open up may be immoral, but it’s considerably satisfying.

Then there’s Araka, an android at Supercontinent who eventually comes to work at the bar and plays quizzes with Donovan. Initially, it is her responsibility to check on the needs of the people coming in to Supercontinent to see which implants they need to fulfil their desires. A budding social media star might want more charisma, or an executive might want to be more persuasive; either way, you’ll need to use a lathe to create the right implant for the right person, and what you wind up making has considerable implications later on in the story. Speaking of which, the last part is that of Donovan’s boyfriend Brandeis, and this is probably the part that requires the most thought. You’ll have to use the clues around you to call people and impersonate others to get information to access different parts of a computer database. Going into this segment too much risks giving away a considerable part of the story, but figuring out which people need to speak to each other to achieve certain results showcases Deconstucteam’s writing prowess for the genius that it is, despite the centrist cudgel it repeatedly attempts to strike you with.

Underneath the gameplay mechanics, The Red Strings Club is an emotional game. There are a lot of things wrong with this world, and while everything would be significantly better if none of this negativity existed, is it morally right to just eradicate it? On the other hand, is it morally right to allow negativity to thrive if the means to remove it exists? There are a few uncomfortable moments when the game questions your motives. For example, when Araka questioned which form of technological control would be acceptable, I was called a hypocrite for wanting to prevent rape and suicide, but not agreeing we should stop people from being sad. It’s in these moments where the overt insistence of logic (granted they’re writing dialogue for androids here) tends to feel more like a cudgel to make you feel guilty for even opposing what is a blatant mass brainwashing exercise. But despite this, the central story of The Red Strings Club is engrossing for the short run time, and as there are certain choices that can influence the game’s final scenes to a degree, you’ll find yourself certainly being tugged at to give them a look, too.

The Red Strings Club isn’t the sort of game that’s designed to frame your depression or anxieties as something you’ll be able to manage and control. But it is a story about emotions and how they can be manipulated by individuals as well as by corporations. There’s no argument for the marketplace of ideas at least, but as an anti-capitalist storyline The Red String’s Club is definitely a dive worth your patronage.

Sit down, fix yourself a stiff drink, and get ready to open up. The Red Strings Club is an establishment worth visiting.