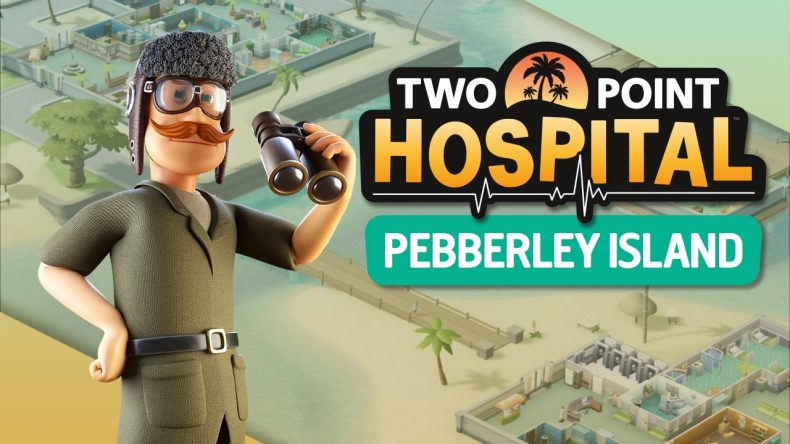 I really liked Two Point Hospital. Quite honestly, it’s not normally a genre that I find fun, which should probably tell you how good a job Two Point Studios did in creating a game that almost anyone can enjoy. A little over six months have passed since the game’s release and now, to the delight of fans, we have been treated to the biggest piece of extra content yet, in the form of Pebberly Island.

Before we get started on my time with this new DLC, let me give you a quick rundown of what it contains. Well, as you might expect, there is a brand new island on the main map, a tropical place that has been reclaimed by nature. Hidden away in the undergrowth are three new hospitals, each needing a good clean or even building from scratch, before you begin treating a whole host of new and ridiculous illnesses.

On top of treating the seemingly endless stream of patients at your hospitals, particularly in the third in the DLC, Pebberly Island will also test you with its bizarre array of natural disasters. Electrical storms will zap both patient and doctor alike, while earthquakes will shake the bolts out of your medical equipment, or sometimes you’ll simply need to send your janitors to clean up the dazed frogs that have dropped from the heavens. Why frogs, you ask? Well, because this is Two Point Hospital and that’s just the way things are around here. I’d actually forgotten just how funny this game can be, when I jumped back in for this review. The daft inventiveness of the new diseases (Budgie Strugglers is a particular highlight) and the increasingly bizarre treatment rooms available to help cure them, as well as the hospital’s announcer that loves to make sarcastic, passive-aggressive remarks over the tannoy. One of my favourites is, “you might be the only one that can hear this. Hello!”

For some reason, an explorer named Wiggy Silverbottom is on a quest to discover the secret to eternal life. It seems he reckons it will be found on Pebberly Island and he wants you to make the ultimate discovery for him, only without the aid of actual doctors.

Indeed, Pebberly Reef’s old hospital was left in disarray after various natural disasters “reclaimed” the space. Your first task is to bring in an army of janitors to sweep up the mess of wrecked medical machines and general detritus that litter the abandoned building, before you’ll even earn yourself a medical licence. It’s a pretty slow start but once you get things going, the pace soon quickens and you’ll find yourself longing for the slow days once more. To be brutally honest though, aside from a few new illnesses and the random element of destructive weather patterns, Pebberly Reef isn’t much different to the main game’s hospital management. It’s not until you reach the second hospital, Overgrowth, that things take a bit of a left turn and you get to see something a little different.

There is no hospital in Overgrowth, only a dusty piece of land with a helicopter landing pad. Surrounding that land is an abundance of trees and plant life, nature having grown unhappy and deciding to take back the land. It’s a ridiculous idea that completing hospital challenges will cause sections of the greenery to recede back into the earth, satisfied with the job you’re doing. It’s a notion that only really makes sense in Two Point Hospital. With each challenge completed, you’ll have a free new plot on which to build more of your hospital, though it will always be open to the elements.

This is why Overgrowth is the best part of the Pebberly Island DLC, the place is completely open. No longer will you have awkwardly placed rooms that can only be accessed by a lone corridor, your patients will simply be able to walk outside the hospital grounds and around to the room they need. It’s oddly liberating in a game that normally hems you in and forces you to think about space and layout as you build your hospitals. The final hospital, the beautifully named Topless Mountain, is unfortunately forgettable. It feels more like a challenge mode, as it throws regular waves of patients at you and expects you to treat them before the next wave arrives. You will obviously find yourself overwhelmed pretty easily, if you’re anything like me. It feels like Topless Mountain was designed with better players in mind, so bear that in mind before you go rushing in, thinking you can easily manage whatever the mountaintop hospital throws at you.

It must be said that Pebberly Island does offer a sizeable amount of content for your £6.99. Three new hospitals, one of which will feel familiar, one a little different and a final one to test your skills to the limit. When you factor in all the amusing new diseases and the inventive designs of the treatment rooms for the more serious ones, it really does feel like you’re getting a lot of bang for your buck. You may feel a little bit of pressure during the opening hour, as the weather threatens to ruin your day and everything looks like it might go wrong, but keep your head and persevere, because there are very good things out there on that island.

Too much happening too quickly

Pebberly Island brings with it a bit of a different experience from its main game, and also comes with a fresh challenge that will entertain returning players.