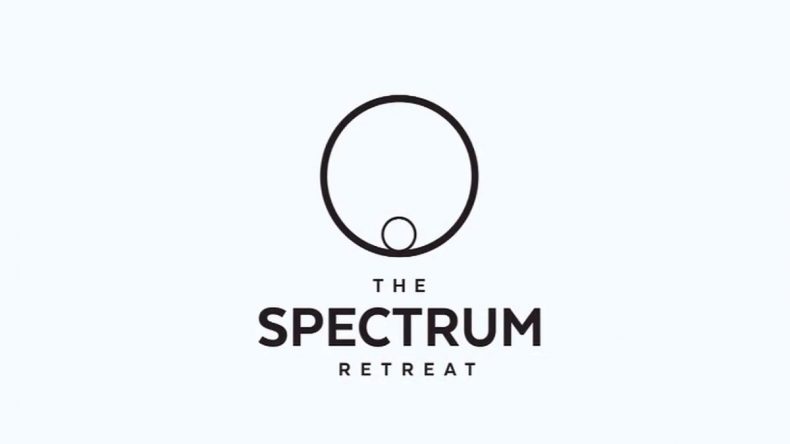 We’ve all been there. You wake up in a hotel room bed, not quite sure how you ended up here. You’re dazed and confused, and can’t remember anything of the night before. Still in a befuddled state, there’s a knock at the door, you stagger over, wiping the sleep from your eyes, and open the door. And you’re greeted by an android giving you a personal wake up call and inviting you down to breakfast.

Yeah, I really should lay off the rum and cokes on a Friday night…

But enough of my jaunts down the Red Lion, and onto The Spectrum Retreat from Dan Smith Studios, a game that coincidentally starts in an identical way. The clean lines and stripped back decor of your hotel room strangely aligned to your stripped back understanding of what is going on, both as the protagonist and as a player. I’m not even given a clue as to what the action button is, meaning I’m standing in front of my hotel room door, wanting to be the polite gentleman I know I can be and answer the calling knock. A quick glance in the Options menu, and R2 (must have been the only thing I didn’t try!) it seems is my friend. The doors open, and if the robot that is staring back at me is annoyed, his shiny, white, feature-less face gives nothing away. I’m politely reminded of the wake-up call I requested, and invited down to breakfast, which sounds like a great idea, after all nothing cures amnesia like bacon, right? But alas, with the robot alarm clock having left, my futuristic phone device begins to ring, and I’m told by a stranger’s voice that not all is as it seems. And that whilst I should definitely go and indulge in some breakfast, I should also be working to escape the Penrose Hotel where I’m staying because I shouldn’t be here. Oh but I also need to act natural for fear of arousing suspicion from the android workers. I sigh and begin to think the bacon might not be worth it.

If this game sounds odd, it’s because it is. The best way I can describe this game is if Fiddlesticks’ Hue and Croteam’s The Talos Principle had a baby at a Hospitality Management convention. At its core it’s a first-person perspective puzzler, but also intertwined is a chilling narrative aiming to explain your family backstory and how you ended up here. The puzzles themselves are split into two main types, the first are based on you exploring the interior of the hotel to find key codes. Some are in plain view, others require the following of fairly basic clues dotted either around the environment or hidden in documents. Think a watered-down Zork: Nemesis and you’ll be close to what’s on offer here. But the meat and potatoes of this game’s puzzles come after you’ve used a key code to access hacking areas. Completing these hacking areas requires the solving of varying numbers of 3D colour-based puzzles. Doing so will unlock access to the next floor of the hotel. The premise of these colour puzzles is that you can absorb colours from certain blocks into your futuristic phone device. Having your phone as a certain colour means you can pass through barriers of that colour. In each puzzle there will be an exit you are aiming for on the other side of these barriers and obstacles. As you progress through the puzzles, and each floor of the hotel, additional dynamics are added to the puzzles, those barriers now also become floor areas, or walkways to traverse, and more colours are added into the mix. And without spoiling anything, there’s even additional ways to traverse levels thrown in at the latter stages adding a further degree of complexity. It creates a fairly natural learning curve to proceedings, as your options grow organically. You never quite feel overwhelmed about what you can do, and the challenge then is purely in figuring out what the level wants you to do to reach the exit.

Aside from the puzzles, the narrative that is woven throughout is worth a closer inspection. It’s a sombre, borderline creepy affair, with it becoming rapidly apparent that the Penrose Hotel is not a real hotel at all, and the reason for your being there becomes darker as you piece together more and more information. If that cheerless tale wasn’t enough to juxtapose the bright and colourful puzzling, the backdrop of the hotel itself and its staff – with just a whiff of Slender Man in their design – will more than do it. That and the clever projecting of emotion from your mysterious caller onto the situation can leave you in a tense environment, feeling like you’re always up against it. The result is a constant feeling of unease when not in the hacking areas, thanks to a game that isn’t afraid to throw a jump scare or two at you, and giving you only just enough of the story to be a bit unsure of what to truly fear and question throughout. The only real niggle occurs when occasionally two conversations overlap in the dialogue, causing a delay in the accompanying subtitles. It only happened a few times, but felt jarring when it did. The game as a whole is best described using two very different words. The first of those is “discovery” in that the game’s philosophy is clear; it wants you to let you explore, learn and use trial and error to piece together both the answers to its puzzles, but also piece together the back story that is interspersed through all facets of the gameplay. Most notably you’ll find titbits of information out either from your mysterious helper on the phone, or from documents left around the place that you can read. However, you’ll also find supplementary information in the colour puzzles too, be they soundbite memories or more documents to read to help you fill in the blanks of your past. It means however much you want to enrich the story and your understanding of it is all up to you, but more fundamentally means that these two separate entities of puzzles and story feel connected, and make sense to happen in tandem. Your progress in puzzles feels like it marries up with your progress in understanding what it all means and why you’re here.

The second of those descriptors I mentioned though, is less complimentary, and that is “repetitive”, but not perhaps in the way you might think. Sure it’s true that the colour puzzles do re-use a few common dynamics over and over, but that is the nature of puzzle games. I never found myself bemoaning this fact, because each new puzzle was a challenge I was facing with a strict set of tools at my disposal. Even after finishing the 33rd and final colour puzzle, I wasn’t bored of the dynamics nor found the puzzles themselves monotonous. No, it was more due to some of the game design choices that made the overall experience repetitive. In the spirit of “acting natural” that I mentioned earlier, you’re forced to go through the same bed-wake up-answer door-breakfast routine multiple times, travelling down the same corridors and stairs every time. And whilst the story does change things up a bit with varying degrees of subtlety and thankfully your default walking speed isn’t too bad, it does feel rather samey after a while. To the point where sometimes the story lets you skip certain walking parts, and I was genuinely relieved. I understand that this helps build immersion, and at times tension too, but it often felt that the journey to the next set of puzzles was just a little far away, and the route was a little too familiar each time for my tastes.

In an ideal world, a puzzler should leave you smiling for two reasons. Firstly, to yourself at the personal accomplishment of completing a puzzle, and secondly in knowing appreciation for the design of the puzzles and how they evolve throughout the game. The Spectrum Retreat nails the former, but falls short on the latter. The puzzles themselves are enjoyable and challenging, culminating in a monster puzzle at the end that brings everything you’ve learned together. However, the design of them feels ordinary most of the time, with each setting feeling like a collection of hoops to jump through, and only occasionally feeling like grand, clever, interlinked design. And whilst this shouldn’t put you off the game, far from it when you consider its low sub-£10 price point for a good 5-8 hours of solid gameplay, it does stop this from being a truly great example of the genre, despite its flashes of brilliance.

The Spectrum Retreat is a solid puzzler, with an immersive narrative undercurrent adding depth and emotion to a genre where such things are normally lacking. Look past certain repetitive sections and you'll find a title offering value for money and an enjoyable challenge.