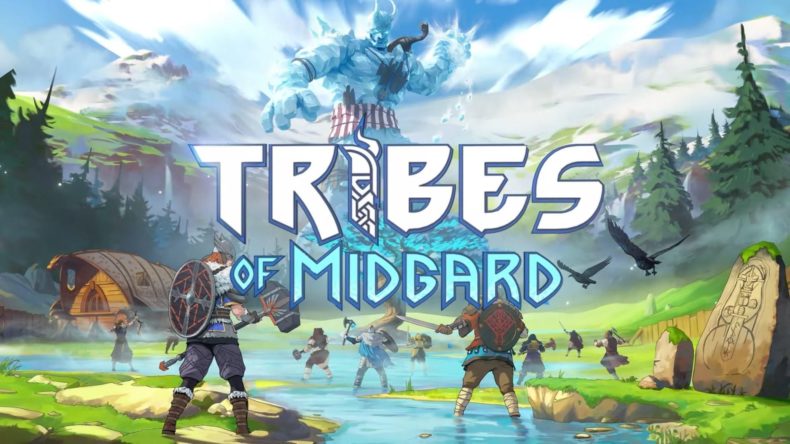 The best thing about co-op games is also the worst thing: other people. Tribes of Midgard from Norsfell Games and Gearbox is clearly designed with cooperative play in mind. But if you’re not doing it with a full server of people that you either know, or are at least working to the same goal, you’ll just fail. Failing is easy in Tribes of Midgard. I’ve played for somewhere beyond 20 hours and I’ve yet to reach the end goal.

Similar to Valheim, you play a Viking warrior – and Einherjar – sent to Midgard from Valhalla to cultivate a settlement and hold off the Jotunn, a race of elemental giants with a fondness for stepping on people. It begins like any other survival game, except the village is already there. A selection of artisans and crafters are in residence to turn the materials you gather into useful items. 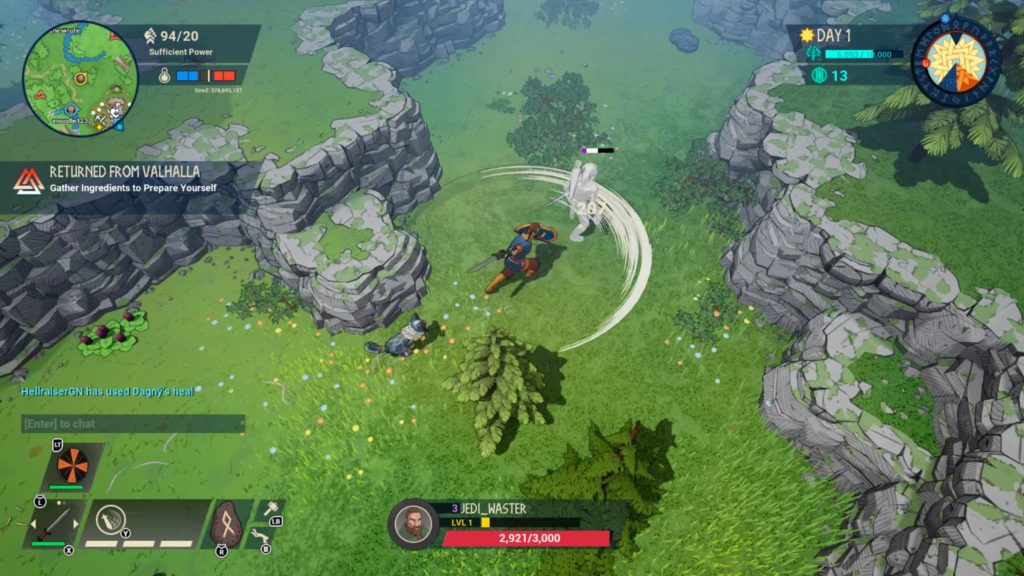 After the rudimentary character creation you’ll find yourself in Midgard in nought but a loincloth. Your first job will be to gather fallen branches and flint. No punching rocks and trees here, just gathering what you find. Once you have a simple axe and pick, you can go and harvest wood, stone, minerals and plants. It’s refreshingly fast how quick you’ll have your first outfit and weapon. But to improve your lot you’ll need to put in the work. Annoyingly, while death forces you to return to your corpse to reclaim your loot, you will lose souls. This the currency used for repairing gear and the World Tree, and losing a lot can be upsetting.

If you’re playing solo you’re in for a challenge. Every night the village is beset by Helthings, demons that will assault Yggdrasil. This magnificent tree stands in the centre of your village and must be fed with life force to thrive. If it sustains enough damage, it’s game over. Your priority must be to defend the World Tree at all costs, which is easy at first. Even alone, the first three or four nights won’t pose a major problem. Your villagers will rush to help and you can revive them infinitely if they fall. Problems arise later, when mini-bosses spawn with the Helthings. At this point you’ll realise quickly that no one is intended to play this alone. 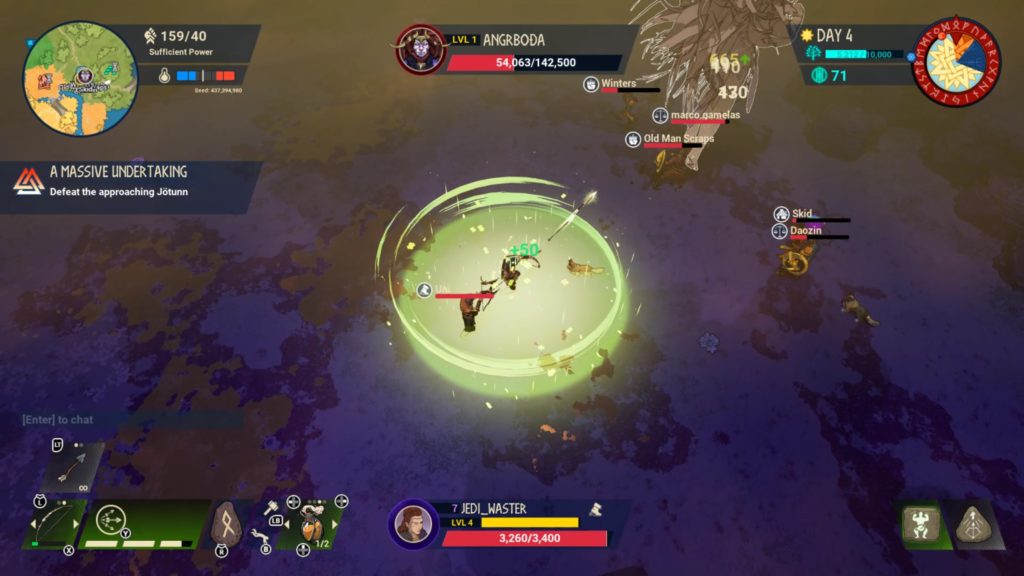 Work together or fall together

Part of the reason for this is the presence of the Jotunns. These colossal bosses spawn one at a time, at the edge of the map. They will slowly make their way to the village, and once there, wipe it in seconds. You must get to them early and take them down. Each is tied to a different element, and taking them down even with a group is no meant feat. If you do defeat one, you’ll get rare materials and a night free of Helthings. Not to mention a huge sense of relief.

In the meantime you’ll be off exploring the land, connecting it with fast-travel Shrines. Local tribes must be subdued, and an endless supply of materials must be harvested. For me, this is the best part of the game. Ranging out into the wilds, searching for rare materials or facing huge beasts and giants. Returning to top up the Warchest with items to help the other players is a good feeling. As is building up the nearby farm, lumber yard and quarry, which will ensure a steady supply of items to your Warchest. You can take materials out to build bridges and ramps for access. Oh, and you’ll need to craft potions to keep the elements at bay, too. There’s a lot going on in Tribes of MIdgard. 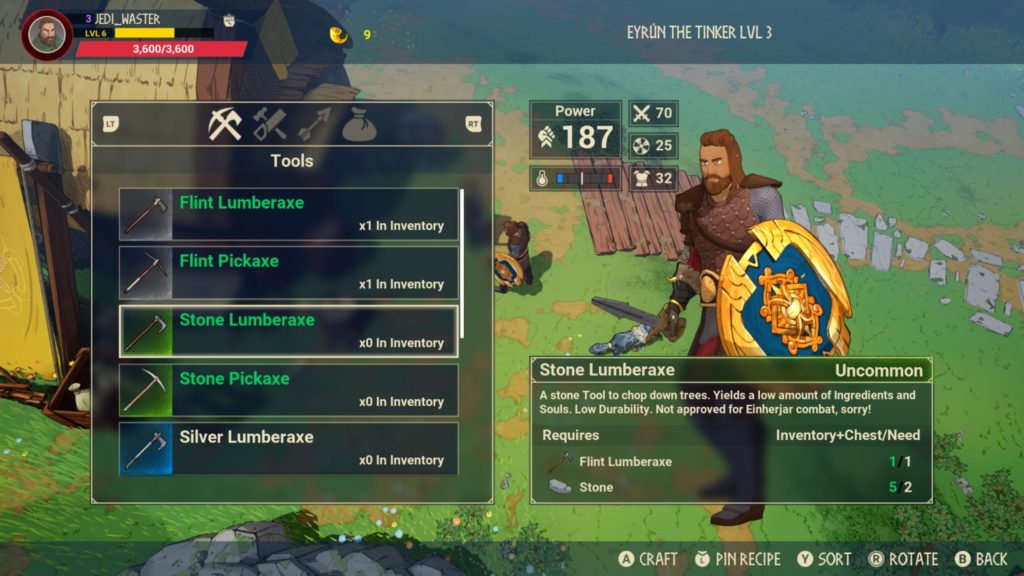 Thankfully, combat is fairly straightforward. You can opt to use either a sword or axe with your shield, a two handed hammer, or a bow. For the latter you can craft an array of elemental arrows to carry with you. You’re able to switch between two different weapon loadouts at any time, which comes in handy when you need some ranged damage. There’s only one basic melee attack, but different weapons have different skills attached. For example, one will conjure a healing circle around you, while another launches tiny whirlwinds at the enemy. Health and mana potions, traps and elixirs will help you survive. But nothing is more effective than having someone alongside you.

Now, this can be double-edged. While most loot is fair game, the biggest problem isn’t ninjas. It’s trolls. The amount of times I’ve spawned into a world with randoms only to have them essentially do nothing but spam the chat until we fail, or wipe the map of resources as fast as possible and build nothing with them. It’s infuriating. Especially as progression on failure really isn’t that worth it. 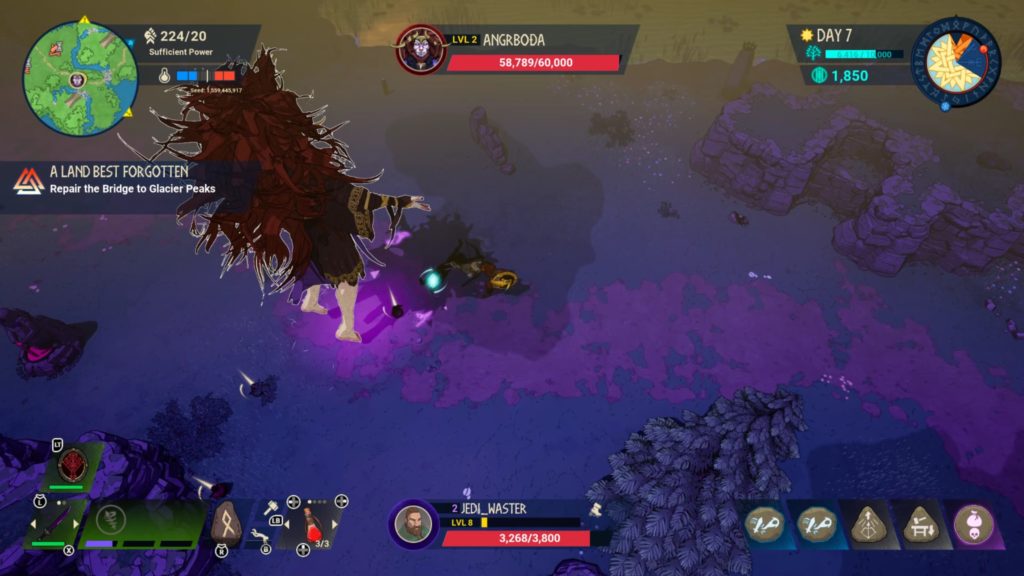 Tribes of Midgard likes to reward you with cosmetics, or currency to buy cosmetics. While you’ll unlock a few decent starter packs that begin a new run with items in your inventory, most rewards are purely cosmetic. And unlocking any of the other 8 classes is almost bloody-mindedly hard. One requires you to survive for 15 days, another asks that you kill 25 enemies in 10 seconds – a number of enemies I can’t even find in one place. As a result I’ve been stuck with the first two and one I did manage to unlock for hours. With such small and seemingly inconsequential skill trees, progression feels slow and unrewarding.

As a result, repetition quickly sets in. A few failures in a row will have you going through the motions and it’s pretty uninspiring. At this point, Survival mode feels almost pointless. All the class rewards are tied to Saga mode, and so I don’t see the appeal of playing the other mode at all. Still, if you really enjoy the survival aspects and don’t fancy all the pesky Jotunn business, it’s not a bad way to kill a few hours.

The procedurally generated worlds will take you a while to explore. The issue here is that if you save and exit, others can carry on playing in your world, and they can even fail while you’re away. Every time you log out you run the risk of losing the progress you made. It’s safer to kill a Jotunn or two and jump in the Bifrost. If you don’t plan on coming back any time soon, at least that will reward your efforts with more cosmetic currency and XP for the battle pass system. 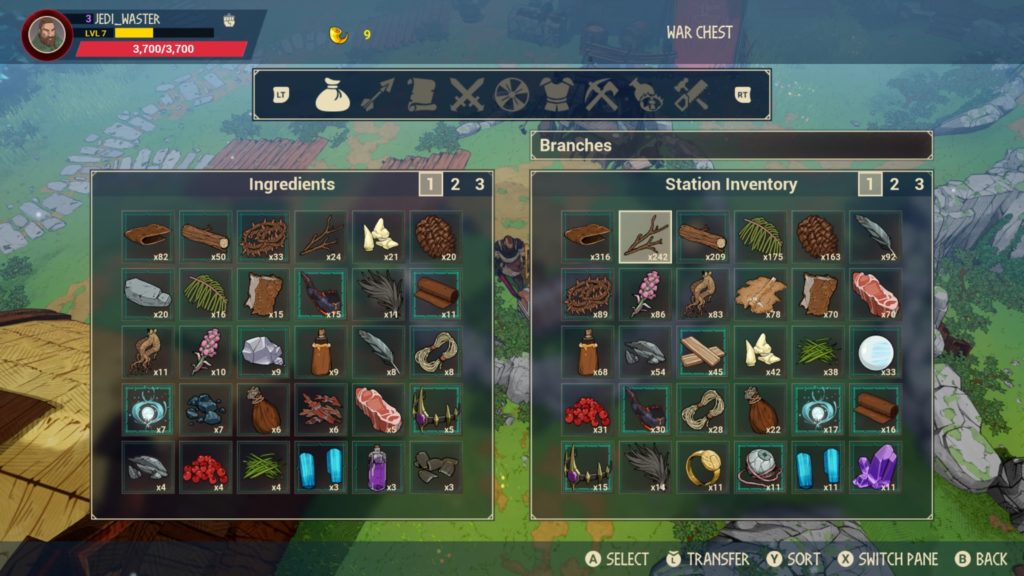 Tribes of Midgard is a simple enough game to recommend to fans of survival and co-op adventure. However, your mileage will vary based on a huge number of factors. There’s a distinct “early access” feel to it, regarding short skill trees and the weird class unlocks. I’d rather the devs just gave us things to grind out, like “kill 100 Helthings” or something to progress a class. It would at least feel like you’re working towards something with every attempt.

Despite a few missteps, Tribes of Midgard is a great game to play with an organised group. Working together brings a real sense of accomplishment, and exploring with friends is fun. Played alone it will eventually become very tough, while played with the wrong type of pick-up-group it can be nothing short of frustrating. But with easy to play combat, big varied maps, loads of gear to craft and a lovely art style, it’s definitely one to check out.

Easy to get into
Looks nice
Great sense of cooperation

Tribes of Midgard has some great ideas, but the cosmetic rewards, short skill trees and difficulty in unlocking new classes makes it feel a little “early access”.