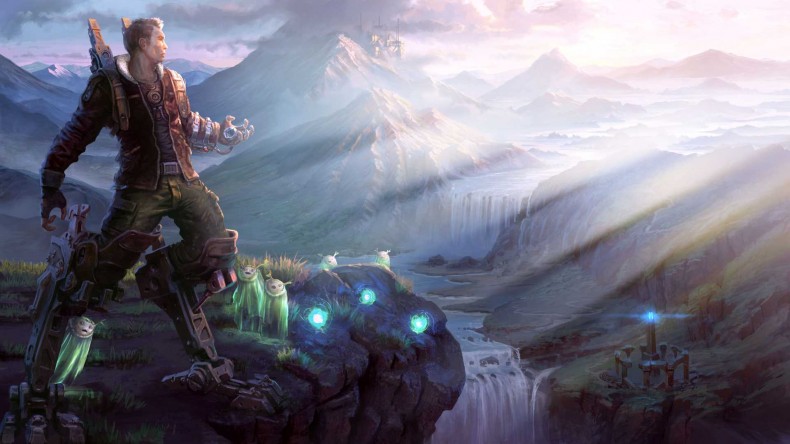 After finishing Valley I was left with a hankering for more; I wanted to know more about Pendulum, Virginia King and the power-hungry scientist Andrew Fisher; I wanted to spend more time in the lush woodlands of the Rocky Mountains, but most importantly I wanted to indulge in the mechanics of the L.E.A.F. suit (Leap Effortlessly through Air Functionality) for a little longer.

Blue Isle Studios has outdone itself with Valley, and although it isn’t particularly long there’s plenty of enjoyment to be had. Slender: The Arrival was a claustrophobic hullabaloo of clichés and jump scares, a plausible horror game that didn’t offer much more than a few shit-your-britches moments. Valley has a lot more to offer and does a sterling job of marrying an engrossing story and fun gameplay.

You play the role of an unnamed explorer who travels to the Rocky Mountains in search of the “Lifeseed”, a power source capable of taking down cities. As you unlock audio logs of characters from the WW2 era, you start to uncover the dark secrets of a project called Pendulum and its creator Andrew Fisher who planned to use the Lifeseed to win the war (via unscrupulous means). There are clear influences from games like Bioshock and Fallout, but Valley never feels like it’s plagiarising, and the story remains interesting throughout. The L.E.A.F. suit is what makes Valley so fun to play. Running down hills at exceptional speeds then jumping over gorges looks and feels liberating. Later upgrades like the Viper Coil and Magnetic Core help you through sticky situations, and the Lake Skipper let’s you make like Jesus over water. Valley implements these mechanics efficiently and never makes the task of getting from point A to B laborious or tedious; by the end you’ll be chaining commands together like nobody’s business, making the final moments of the game a real delight.

Using any part of your suit takes away energy, but it’s pretty easy to fill up on supplies. Orbs exist everywhere and there are also energy cells in crates and other hubs for restoring your gauge, meaning you’ll seldom run out. Perhaps the most captivating element of Valley comes from the ability to manipulate life and death, giving you yet another way to replenish energy, but also restore your health.

Your health is tethered to the valley, so when you fall off a cliff or get killed by one of the enemies, part of the valley dies. Your suit allows you to bring things back to life and by doing so, give you a part of your health back. You can also choose to kill life in the valley, and while it helps to regain energy, it does nothing for your health. I’ve never really seen anything like this before and it’s a really smart move on Blue Isle’s part to make it an integral system and not just some throwaway feature. One of my few issues with Valley is the creatures you encounter and how they don’t really seem important. The “daemons” living in the valley are weird looking wisps that can be harvested for energy, but they don’t really do anything other than mill about frantically. There are only a handful of enemies you come up against: purple and green balls of unstable light and floaty creatures that look like distorted versions of Orko from He-Man. You can engage in a fight with them, but it’s worth your while running past them. Shooting at them isn’t fun and it takes away loads of energy; the only time you really have to fight is against one boss towards the end.

I was really surprised with how much I enjoyed Valley, and much like Mirror’s Edge Catalyst, traversing the environment is the game’s best feature. It’s not an open world game or a walking sim, but it certainly combines a lot of the best stuff from some of your favourite games. It took me roughly 3 and a half hours to finish, so it’s not the longest experience, but it’s definitely worth trying.

The L.E.A.F. suit is lots of fun
Interesting story
Life and death manipulation

Enemies are boring and can be ignored
Quite short

Valley is a surprisingly smart and fun adventure game with fluid movement and intuitive controls, although it doesn’t last long.