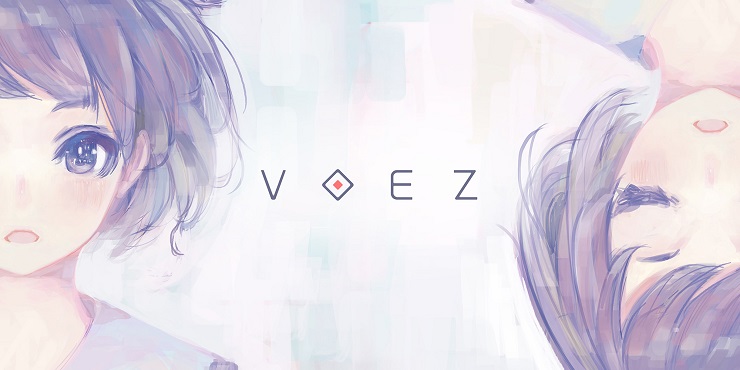 There was some consternation when VOEZ was announced as a launch title for the Switch back at the tail end of February. The game had only come out on iOS and Android systems prior to this, and due to its interface would be playable in tablet mode only; in fact, the buttons and sticks play absolutely no part in VOEZ whatsoever.

VOEZ is a rhythm action game, but unlike the more well-known titles like Project Diva and Guitar Hero, you don’t push buttons in time to the notes. The game’s interface is a series of lines, one horizontal and several vertical, note markers flow down from the top of the screen to the bottom where you perform the required action to ‘play’ the note. Movements required include genre stalwarts such as tap and hold, but will be regularly interspersed with times you’ll need to swipe, and others where you’ll need to slide as the path changes. It doesn’t sound very special but it’s all down to how it’s presented. The game has a tracklist of over a hundred songs ranging from Pop to Trance, and while the rhythms and note placement change they’re all presented the same way. The vertical bars pass back and forth across the display, stretching, contracting and reacting to movements and swipes in time with the music – kind of like an interactive visualizer – and while it doesn’t sound like much it’s utterly charming watching these lines dance around the screen; you can’t help but get sucked into the rhythm.

If you just want to chill and play with the music, then playing through this on Easy mode is the way to go. If you want a challenge, however, you also have Hard and Special modes for each song. Hard mode ramps up the quantity of notes to a considerable degree giving you a challenge to really get your teeth into. Special modes takes this one step further, changing the note types and placements and moving them around the screen much more, meaning your eyes and fingers need to do a lot more work to keep up.

Additionally, you also have the option to change the speed the note icons fall at from a serene one to a nightmare factor of ten. At least if you find Easy to be too gentle and Hard to be too much you can adjust the challenge to your liking, I don’t know why anyone would want to take on speed ten as it requires a certain degree of foresight to be able to stand a chance of registering the input, but it’s optional and it’s there, which I guess is better than not having it at all.

Other than this, all the game has to offer is a set of diary entries that unlock as you complete tracks; this tells the story of a group of kids in a band as a justification for playing a music game. There’s no branching narrative, no choices to be made, just sections of text to read; once again, it’s entirely optional and can be a welcome distraction from the tip tapping on the screen.
It’s all held together with an interface formed around diamond tiles, from your profile picture, to the track icons, to the notes that you’ll play; it’s minimalist, but looks great. There is some input lag in the menu screens, with selections taking a second to register, and swipes through the music selection are heavy and slow, but thankfully this isn’t an issue during play so as a result it’s a non-issue. If anything, VOEZ’s problems are down to the system it finds itself on. When attached, the Switch Joy-Cons make the unit rather bulky meaning you need to stretch your thumbs across to be able to access the entire screen and it’s not advisable to use the kickstand as it’s too flimsy so regular tapping will send it toppling over. Laying it down would work, but once again, if the Joy-Cons are attached it won’t lay flat. So, for a comfortable play experience you’d need to remove and put the Joy-Cons somewhere; ok at home, but difficult if you’re playing on a commute or in public.

I’m not going to hold something that VOEZ can’t control against it; this is a great game and deserves a place on your dwindling Switch storage. I’m going to go out on a limb here and say that it’s as deserving of your time as Breath of the Wild; granted if you don’t like rhythm action you can take what I say with a pinch of salt, but for quantity of tracks and the experience on offer you really can’t ask for much more from this little package. Now if only Nintendo could negotiate well enough to get Persona 4: Dancing all Night on here.

It’s gone under the radar a bit, but VOEZ’s place on the Switch launch line-up is highly deserved and you should give it your attention.