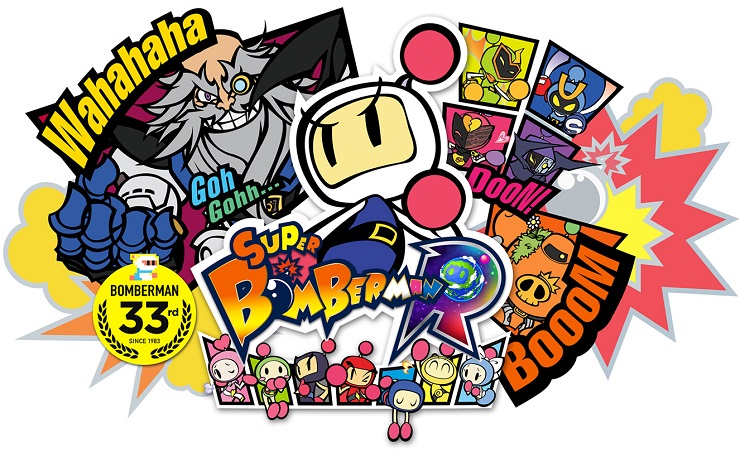 Nintendo’s Switch looks to the past as much as it points to the future of games consoles. A home console designed for easy play with multiple people, and a handheld that can host a multiplayer party at a drop of a hat, it echoes Nintendo’s past with a lineup that includes Chrono Trigger (I am Setsuna), F-Zero (Fast RMX), Megaman (Shovel Knight), Mario Kart and eventually Street Fighter II (now there’s a SNES classic). Super Bomberman R is a nod to both Nintendo’s past and its vision of the future.

Taking you back those heady 16-bit days, the Bomberman formula goes back to its routes with basic power ups and a focus on multiplayer, with Story mode relegated to second place on the main menu. The game’s presented in after-school cartoon form complete with an over-enthusiastic theme tune and irritating voices slapped onto a set of clichéd heroes. Story mode sees you take control of the titular Bombermen (and women) after Robotnik Dr Wily MechaDoc revives the evil Bombermen in an attempt to take over the universe. It’s thankful that the story mode is entirely optional, as it just isn’t much fun compared to the multiplayer mode. You need to fight through a series of rote levels blowing up blocks and mobs, collecting keys and hitting switches until a portal opens to the next level; again and again and again. After you’re through these you’re up against a two stage boss fight, which even on easy proves to be a harsh challenge. Completing these just progresses the nonsensical story onwards to its inevitable conclusion of good winning the day and yadda yadda. At least playing through this earns you coins (which on the boss fights you’ll want to use to resurrect yourself), you can use these to purchase decorative wear for your chosen Bomber or even for new arenas in the multiplayer mode.

Anyway, single player isn’t important, where Bomberman multiplayer has always been where it’s at, and here it’s as good as it ever was. There’s a smattering of arenas (which you can add to as mentioned just a moment ago), but there’s a whole host of customization options which you can tailor the experience with. You can choose either four or eight player matches, with unallocated player slots filled with AI bots, from there you can specify round times, wins required for the game to end, removal of revenge carts, and even turning off the annoying skull collectable that prevents you from laying bombs. Whatever way you like your game you can bring it here (provided you don’t miss the Louie).

In MP the goal is simple: be the last person standing. With a bunch of friends this can prove to be riotous fun as you all hold a Joy-Con each and attempt to blow each other to smithereens. If you leave the revenge carts on, anyone eliminated can throw bombs from the sidelines, and if they succeed in taking someone out they’ll find themselves back in the game. While analogue sticks aren’t the best input for this, the Joy-Cons tend to work just fine in play, and as a result it’s easy to set up a four-player matchup with two players and two bots with just one set of controllers, but obviously, the more controllers you can get together the more fun you are going to have. HexaDrive has done some tinkering with the arena formula here, with a bunch of gimmick arenas featuring slippery floors, pitfalls and conveyer belts, but nothing compares to the good old faithful retro arena as featured in Bomberman of yore. I’m not saying the gimmick arenas can’t be fun – they can, as chaos can reign when you don’t know what to expect, but there’s a certain frustration when you’re killed by something other than an explosion. Put simply, you’re going to pick your favourites and stick with them.

Super Bomberman R does a great job of bringing back those warm, fuzzy feelings of the SNES era. Those days where you would sit around your old CRT TV with a multitap plugged in playing with your family at a get together, and for that, it’s hard to fault. What you can fault, though, is the cost of entry, with a forgettable single player and a whole load of unused multiplayer content can you justify the outlay? Maybe it’s worth clubbing together with a bunch of friends and affording it that way – just a suggestion. Either way, your justification for buying Bomberman is always going to be how much you value nostalgia, and for some the price might just be a bit too steep.

If you can ignore the sheer cost, Super Bomberman R is a great way to have fun; get it and have a blast.