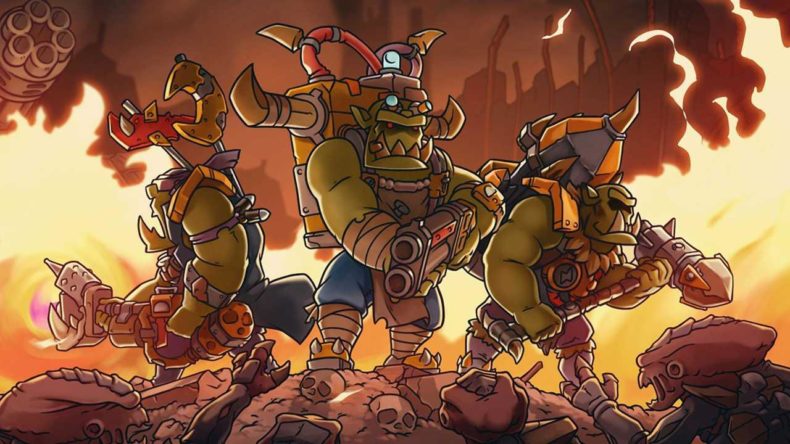 I’ve often joked that there’s yet to be a video game genre invented that Games Workshop won’t license a Warhammer game for somehow. You think there’ll never be a Warhammer 40K dating sim? It’ll happen, sooner or later, mark my words. But something equally as unlikely to come out of that grim dark future in which there is, allegedly, only war, is comedy. Warhammer 40,000: Shootaz, Blood & Teef, from indie outfit Rogueside, is here to change that – and what better way to do it than with screaming Orks and mindless violence?

Fans of the universe will know just how shockingly, dismissively cruel Orks can be. They will have read the novels and played other games outside of the tabletop itself that reinforce just how little shit the greenskins give as a general rule. They’re also the closest thing the universe has to comic relief, their broad Cockney accents and simple minds reinforcing the stereotype that they’re really just into war for craic.

Shootaz, Blood & Teef does nothing to assuage this notion. The entire game centers on your protagonist’s need to exact violent, gory revenge on the Boss who betrayed him. To that end, you march ever onwards, blasting the face off anything that gets in your way and leaving a trail of destruction and body parts in your wake. 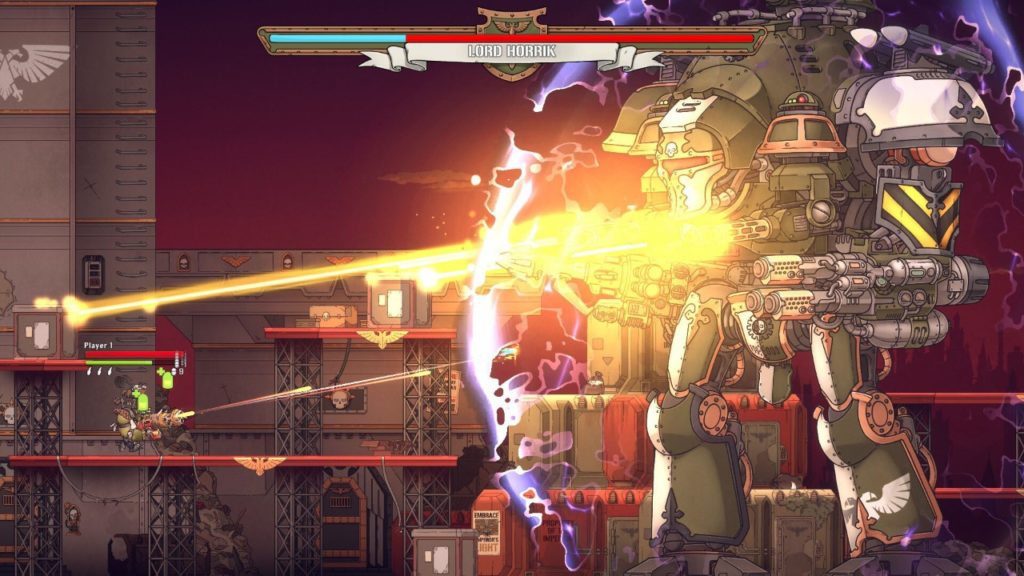 It begins with your warband in the middle of a campaign to take Planet Luteus from the puny Humies of the Imperium, since it’s rich with resources to fuel the Ork war machine. It sets a fitting backdrop: the world is already on fire and in bits, the perfect battleground for your vengeance. It also promises the kind of aesthetic all 40k games need: grease, chains, fire, and skulls all over the shop.

From the planet’s dust-blown surface to a Hive City deep beneath the ground, your journey leads you through a variety of environments just waiting to be shot at. There are hazards to avoid, rudimentary door puzzles to solve, and a ton of stuff to blow up. Everything an Ork needs, really, including enemies to mince into wobbly squibs of green flesh.

The majority of enemies are other Orks intent on defending the Boss, but you’ll also face Imperium soldiers and alien nasties. Either way the gameplay is pretty simple at all times: keeo moving, shooting, and throwing squigs at anything you miss. It’s a 2D shooter with an onus on fun, liberally sprinkling checkpoints throughout at which you can upgrade or modify your arsenal. 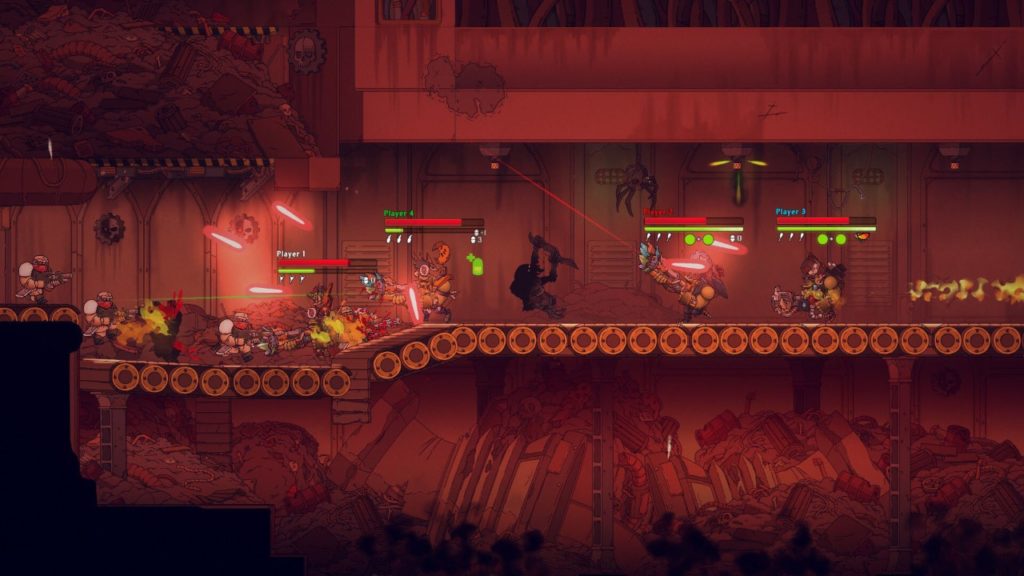 Unsurprisingly, the currency you need is teef, Ork teeth to be exact. Collect enough and you can spend them to change up your weapons with a variety of effects. Sometimes you just want to take a few heads off with a shottie; sometimes you’re in the mood to spray and pray. There’s a weapon for every mood and mods to switch it up, but honestly it’s never more complicated than running, jumping and shooting.

The stages are surprisingly vertical, requiring you to climb (well, jump) to reach certain areas or to enable you to backtrack to doors you just found the lever for. The only time it ever really becomes a challenge is during some of the boss battles. The bosses in Shootas, Blood & Teef are generally awesome, from facing off against an Ork metal band in the first area to battling a huge Stompa, they’re always presented on an epic scale and feel like an event.

Warhammer: 40,000: Shootaz, Blood and Teef is a good-looking game, too. It’s bright, colourful, and obviously lovingly-crafted. As a side note, I played the campain on Steam Deck and it felt like a much better fit than a larger screen. Throughout the short, sweet campaign, the attention to detail is incredible, and despite the comedy it never feels like anything less than an authentic representation of the universe. Well, except for the hats, maybe. These can be purchased at upgrade stations and add nothing to proceedings but a bit of class. Do Orks like hats? Has anyone ever asked thaty question before? 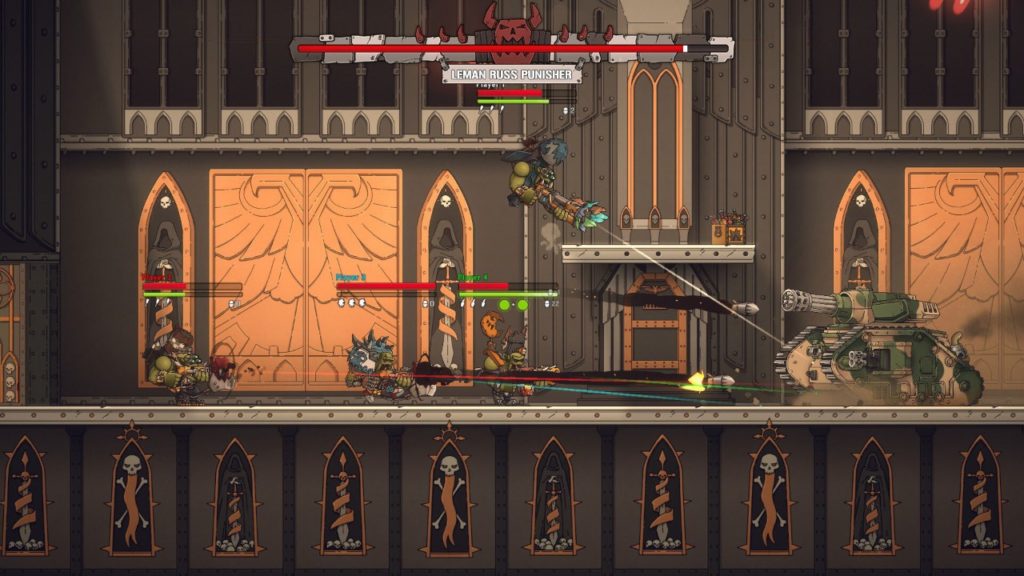 You can smash through the entire game in around 3 hours, but there’s replayability in the form of hectic 4-player multiplayer. While you can replay the campaign with a different starting loadout – which affects passive buffs and abilities – it doesn’t change the minute-to-minute action up nearly enough to make up for the fact that solo players will be done with Warhammer 40,000: Shootaz, Blood & Teef in a single afternoon.

It’s immediate, frantic fun that refuses to take itself, or its bleak universe, seriously. It almost feels like an anathema to the usual 40K fare, which is not to belittle the franchise as it exists (I’m an unapologetic fan of most things related to 40K or Age of Sigmar); it’s just refreshing to see the universe handled with a bit of levity in a video game. Long may it continue.

Warhammer 40,000: Shootaz, Blood & Teef is immediate, frantic fun that refuses to take itself, or its bleak universe, seriously.