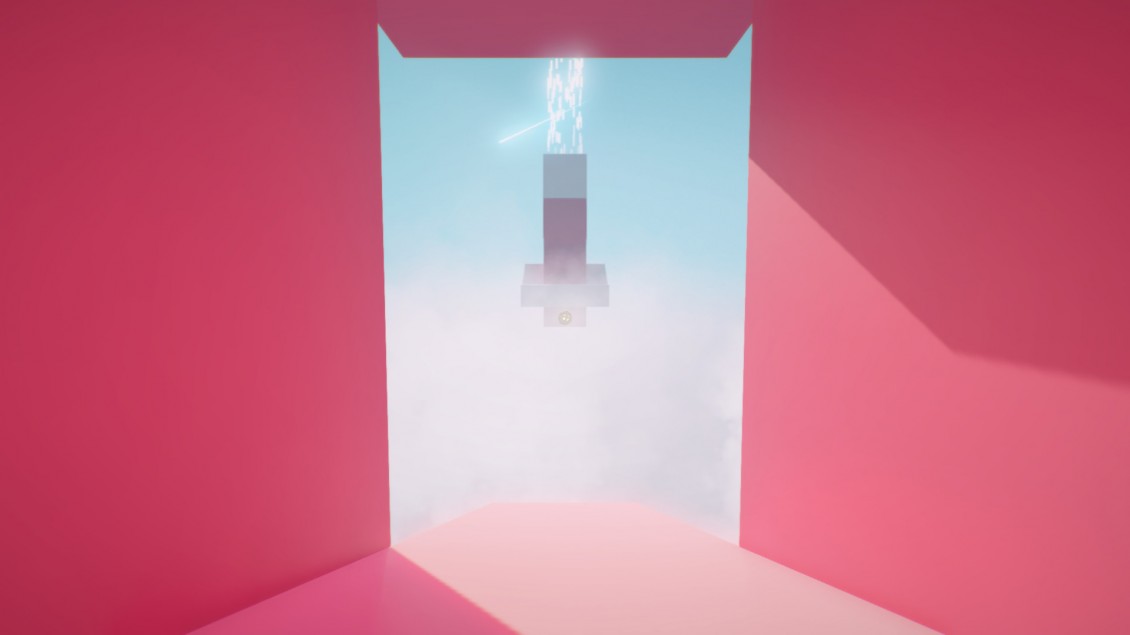 Gliding through the dreamscape of Welkin Road from puzzle to puzzle can be both liberating and restricting, combining the intrinsic joy of conquering adversity and the constant struggle of failure. I can’t honestly tell you whether I enjoyed playing Welkin Road, but I can safely say I’ve never liked a game as much as I’ve loathed.

Welkin Road sees you combine two fundamental mechanics to solve a whole host of puzzles: parkour and grappling. Spread across a minimalistic obstacle course among the clouds, you must head from the beginning to the end of the course by wall climbing, crawling, jumping, and walking to help you solve most of the puzzles (think Mirror’s Edge crossed with Monument Valley). Most of these moves are straightforward enough to execute, and when you’re moving fluidly through the map, you’ll really see where the brilliance of the game lies.

Although parkour plays a huge part, the grappling ability will be the one element to make or break its success. Using your grapple correctly and efficiently will be the key to travelling through each level. You’ll come across plenty of orbs hanging in the air, and at certain points you’ll need them to jump over huge gaps and swing around corners. You wear a pair of gloves that have the ability to create an electric rope-like connection to the orbs, but the pinpoint precision you’ll need to do so is finicky it borders on unreasonable. I spent a silly amount of time trying to tether my movement between the orbs. For every successful connection I made, another ten opportunities were squandered. Even when you’re aiming your reticle directly at them, you don’t always make a connection. Trial and error is the only way to not only connect with the orbs, but also when to connect and when to let go. There are various coloured orbs throughout Welkin Road offering different abilities which help to mix up the grappling side of things, but if you don’t get on with it after an hour or two, you probably won’t after five.

One of the more bizarre emissions from Welkin Road is controller support. There’s no doubt it would be much easier to traverse the conundrums with a control pad, especially when using the grappling. It would be great to see this functionality added when the game comes out of Early Access, although I’m not sure if it’s something being planned at this time.

Regardless of whether the grappling system captivates or frustrates, there is no denying how beautiful this game is; basking in simplicity of design, Welkin Road makes great use of wide-open expanses, a diminutive pocket of bright colours and a tranquil, vacant sky. The soft breeze compliments your solitary wonder and if it wasn’t for the occasional difficulty spike, you’d think you were in heaven. Outside of the main campaign, there is a Speedrun mode which allows you to play through any of the main levels in an attempt to gain a ridiculously fast time. You can then compare with others to see if you were the fastest, giving a competitive edge and a nice parallel to the single player campaign.

One of the best features about Welkin Road is the checkpoints system, and the speed at which you’re back on your feet after plummeting to your death. Seconds barely pass before you’re back at the last puzzle you attempted, and not even at the start, but at the exact spot you fell. This helps no end with the moments in which you’re really struggling and it makes a great difference to whether you give a puzzle one more try or completely sack it off for the night.

Developer Gregor Panič has some really interesting things planned, such as a level editor, the ability to watch replays and racing against friends live, but for now, Welkin Road still has enough to keep you going back for more, even if you can’t get on with its frustrating controls.

Review code provided by publisher. We’ll update the review as development continues, and remove the “early access” tag and score it when it’s fully released.
Liked it? Take a second to support GodisaGeek.com on Patreon!