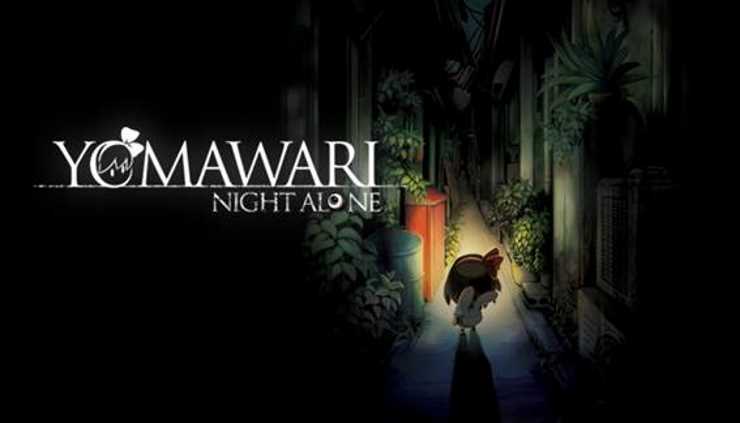 When I interviewed NIS America back in April 2015, they mentioned how htoL#NiQ: The Firefly Diary was created by a smaller team within Nippon Ichi Software. Yomawari – Night Alone reminds me of the best parts of Firefly Diary in terms of atmosphere and art style, but it is delivered in a package that will most definitely keep you up at night.

A little girl is walking her dog near a bridge as Yomawari’s controls and mechanics are slowly introduced to you. You quickly learn how to interact with objects through a question mark and exclamation mark system before throwing a small rock onto the middle of the road. This seemingly miniscule event is the beginning of despair, horror, and fear for both the girl and you.

Yomawari involves exploration first and foremost and then hiding from various nightmare inducing creatures in the night. You have a stamina bar that also serves as an alert for your heartbeat as an enemy approaches. You can either run or hide, and hiding works out better in many occasions. Some enemies can also only be seen in the light so you have to rely on street lights or your torch based on location. The locations feel varied and the art styles of the environment and the enemies somehow come together really well. One of my main complaints is the save system. There are Jizo statues across the town and offering them Yen will let you set restore points. If you die while exploring, you respawn from the last Jizo statue you used. This does not serve as a proper save point and the only place you can actually save your progress is at home. For a portable game, having no save anywhere is a strange decision. The second problem is in the design of how you learn enemy patterns by trial and error, in some cases to see yourself die over and over again. This sort of broke immersion for me because the impact of the screen going all blood red with splatters lessens each time you die as you try and progress through an annoying section.

Just like in Firefly Diary, Yomawari’s art is great. I love the environment design throughout the town. The designers who came up with the eclectic and ghastly nightmare-esque creatures deserve a lot of praise. It isn’t easy accomplishing what they did with an absolutely horrifying atmosphere thanks to clashing art styles. As much as I loved my time with Yomawari, I don’t ever want to see these things again. *shudder* Audio design is another strong point for Nippon Ichi Software here. The sound effects perfectly complement the visuals creating a feeling of hopelessness and despair as you cower in fear with terrifying creatures around you.

Yomawari takes place over multiple chapters but is fairly short. A single playthrough will take you between 5 and 8 hours depending on how much you explore and how quick you are at adapting to enemy patterns. There are sections where making one enemy attack another through quick movement is the only way to move forward.

While most people mention the likes of Resident Evil 4 when questioned about horror, I consider Corpse Party as one of the finest forms of interactive horror in gaming. Having completed Yomawari, I now have another game to recommend to any fan of horror media. It is flawed but an experience worth having. I recommend playing it in the night with a good pair of headphones in a single sitting.

One of the scariest experiences I’ve ever had in gaming with its nerve-racking atmosphere and grotesque enemies.

Yomawari: Lost in the Dark is releasing in October

The Cruel King and the Great Hero review