Behind The Scenes Of L.A. Noire: Costume & Wardrobe

In their efforts toward complete authenticity – the design process on L.A. Noire reads more like the production schedule for a big budget Hollywood Movie. In this feature, part two of the L.A. Noire backstage series, Team Bondi Production Designer Simon Wood will go behind the scenes and explain the inner workings of how the designers – with the help of Film and TV Costume Designer Wendy Cork – made sure the style and fashions of post-war America were faithfully represented in the game.

The game has such a huge cast, that costume clearly was going to be an important factor. They didn’t want to get careless with such details. Each different character with a different profession should be recognisable, yet authentic to the setting. So principal costumes by Ms. Cork and her team were scanned by Team Bondi full body 3D, to produce high resolution models which would simulate the texture of the fabrics in detail. Many were sourced direct from L.A. and had been previously used for films such as; ‘Gone with the Wind’, ‘The Godfather’, ‘L.A. Confidential’, ‘Chinatown’ – certainly a strong pedigree, and clearly applicable to the time period in mind. 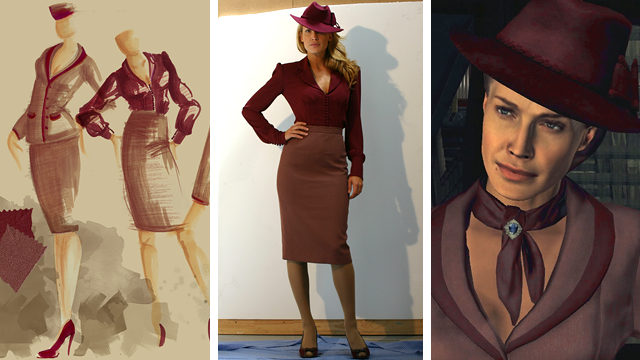 Left: Fashion illustration sketches, drawn in a vintage style were produced, and period fabric swatches collected; Middle: Actors and actresses who played the parts took part in a full photo shoot; Right: How the character would look in the final product.

The next step was for Bondi to scan and photograph a massive variety of clothes so they could have 3D models to shader swap and merge together to dressthe entire population of the game – this meant that slight tweaks could be made to the same outfit in order to easily make an endless number of different costumes. “If you think about all the people you’d expect to see in just one bar: patrons, barmen, waitresses – and then times that by over 140 locations – and then on top of that figure all the pedestrians walking around the city – the costume need is very high and the character team have really created some wonderful and diverse outfits to suit them with.”

The style is really true to the character of each inhabitant of the game and completely authentic to the period. This was all captured by drawing concept sketches in a vintage fashion illustration style, gathering real fabrics that would have been used for the clothes of the time, carrying out full photo shoots of actors and actresses in costume and then scanning them all into the game and generating the digital version. The nuances of each different person and their look are encapsulated in their full body scan. And when we look at the results in the trailers that have been released so far – the people all seem to have their distinct character and own style, no two characters looking alike. That is a fantastic achievement for such a large sandbox title.