Behind The Scenes Of L.A. Noire: Props

We have already talked about the insane levels of attention to detail on display in the latest title from Rockstar Games, but in this third installment of the L.A. Noire backstage series, focuses on the props and accessories scattered throughout the version of 1947 Los Angeles Team Bondi have sculpted. This article will cover how research into props from the era was worked into the design, once again explained by the game’s Production Designer, Simon Wood.

Early on in the design process, prior to the creation of any of the in-game missions – or “cases” – the production team drew up prop lists to cover all of the furniture and other set items needed for each location in the game. “It was a huge undertaking but our core reference was great and we knew we’d have a great mixture of residential and commercial locations in the game. So I laughed and started with the word ‘Chair’ and the list grew from there.”  During their extensive Los Angeles recon photo shoots that have been mentioned in revious articles, the team had to “(hire) almost every conceivable vintage prop from the biggest Hollywood prop houses in the business… photographing items as quick as the Prop Men could get them off the truck.” 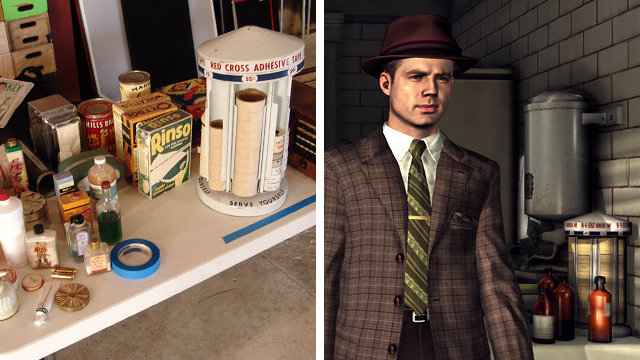 Real antique items from the 1940’s were used as reference for putting together the fully-furnished and accessorised scenes in the final game, in the most authentic way possible.

Then, based on the production bibles aforementioned in the articles yesterday, the team started dressing the various locations listed, in a way that would ensure they made the game world realistic – but wouldn’t get in the way of gameplay. “We were always mindful of the game’s super life-like conversations and the need to light them correctly.  Chee Kin (Team Bondi Art Director) had to have something to justify the way people were lit, so just like in film, we placed practical lights in the locations.”

The vintage props which would have been made or at least present in the 1940’s were invaluable. As typography, brand and product styling has very distinct era definitions, original period items would be essential in order to accurately set up the locations. The design of a classic cigarette packet, for example, would place the game in a specific time period, and this had to be spot on. Throughout the whole game, items have been painstakingly recreated from life, or inspired by the fashion and design on the time. Every  scene we have viewed – whether it be in trailers or screenshots has been lovingly set-up, to create natural, life-like environments that complement the other design aspect perfectly. So keep your eyes peeled if you were born prior to 1940! You might just see that old coffee brand you used to drink, on-screen, as you play.