previous
Wii U Basic Recall Rumoured
random
next
Donatello Stars in Third TMNT: Out of the Shadows Video
0 comments 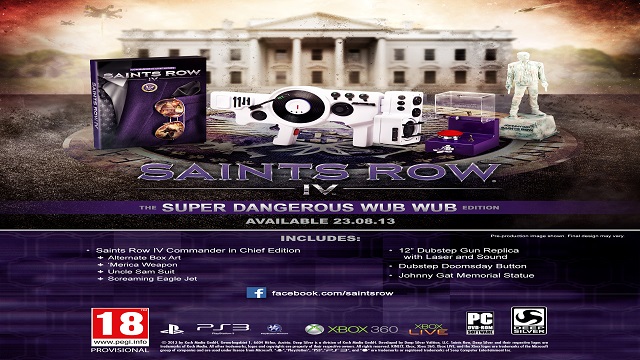 The purple rope has been opened on Saint’s Row IV’s Collector’s Edition. After taking a consumer vote on what to they wanted, Saint’s Row IV Super Dangerous Wub Wub Edition will include a 12 inch Dub Step gun replica, a 8 inch Johnny Gat Memorial Statue, a pocket-sized Dubstep Doomsday Button, and extra pre-order DLC. After all, you have become the President in Saint’s Row IV and democracy rules. This particular limited edition will set you back £89.99 or $99.99. There is enough cool stuff here for the avid Saint’s Row fan to drop an extra $40.

Saints Row IV will be released for Xbox 360, PlayStation 3, and PC on August 23 in the UK and August 20 in North America.