Telltale Games To Hold Live Premiere Of Tales From The Borderlands 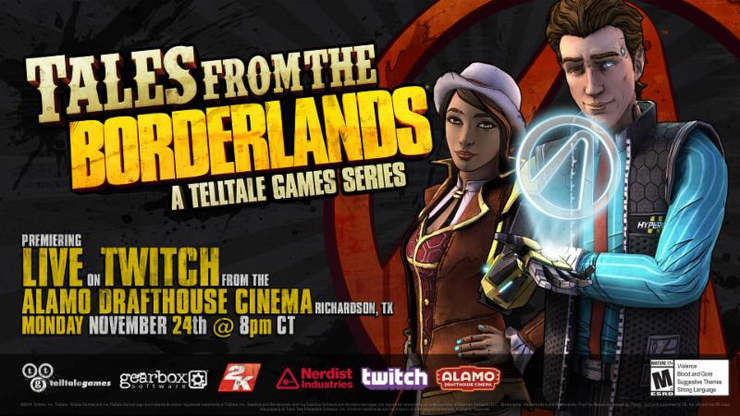 Last week we were treated to the first trailer for the new Telltale Games series – Tales from the Borderlands. With the launch window of this new title nearing, Telltale are pulling out all of the stops to get fans interested, including a live premiere of the game.

Telltale Games and Gearbox Software will be offering fans in North America the chance to join them at the Alamo Drafthouse in Richardson, Texas on Monday November 24, where they will host a play-through of the first episode: Zero Sum.

As most Telltale Games fans won’t be able to make the trip to Texas for the live event, it will also be streamed online by Nerdist.com via Twitch! starting at 6 p.m. PT or 9 p.m. ET (which is 1 a.m. November 25 for those watching from the UK and 1 p.m. AET on November 25 for those in Australia).

In a special world premiere event at the Alamo Drafthouse Cinema in Richardson, Texas, Telltale and hometown heroes Gearbox Software will show the first episode of the series, ‘Zer0 Sum, ‘ LIVE in front of an audience of Borderlands’ biggest fans on the big screen! Attendees are encouraged to show up to the screening in costume as their favorite Borderlands characters, and ready to interact with the game in this very special play through of the episode. With the audience’s help, the developers will make the game’s tough decisions live on-screen as they begin this new Borderlands story.

Prizes and giveaways will be awarded to fans with the best costumes, and the evening will also welcome Nerdist.com who will be streaming the event LIVE on Twitch as the audience raises a glass in celebration of the world premiere. A limited number of free tickets to this first-of-its-kind interactive play-through are available online, and no fan in attendance will leave empty-handed…

There is still no confirmed release date for the series, but that is bound to be announced soon, what with all of the other news coming out of Telltale Games lately.