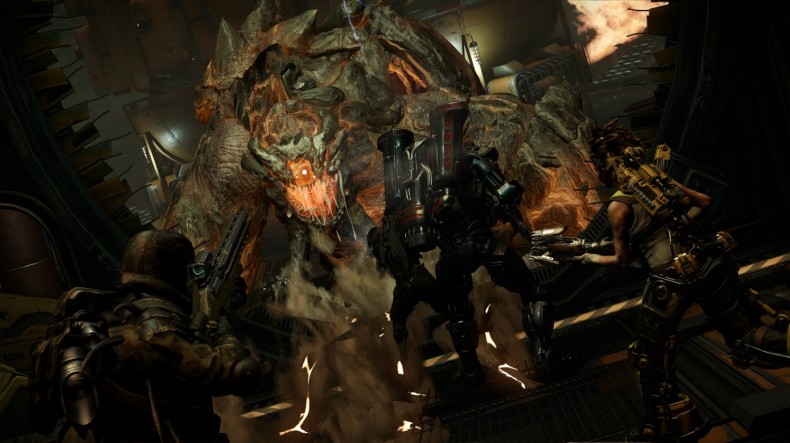 Four new hunters as well as a new monster, the Behemoth, are coming to Turtle Rock Studios Evolve at the end of this month, alongside a new Observer mode and two free maps.

The DLC pack, releasing worldwide on March 31, will be available at no additional cost to season pass holders. Players who pre-ordered Evolve at participating retailers will get the Behemoth free as part of the Monsters Expansion Pack, otherwise the pack can be purchased separately for £11.99.

Four new hunters also join the fight –– Torvald, an cyborg Assault; Crow, a Trapper with a pet Batray; Slim, a genetically modified Medic and Sunny, a Support character equipped with a mini-nuke grenade launcher. All of these characters will be available to season pass holders at no additional cost, or can be purchased otherwise for £6.19. The Hunting Season Pass costs £19.99 and allows players to download all new hunters and monsters, including those already available as well as those to come in the future. See the new hunters below.

Alongside the new additions to the roster, a new Observer mode will be available to all players which allows a sixth player to passively enter a custom game of Evolve and spectate. The main purpose of this mode is to enhance live streaming quality by allowing for seamless switching to view any of the five players as well as displaying an informative HUD that updates in real time throughout the match, showcasing player health, survival odds, perk and the mini-map.

Two new maps –– Broken Hill Foundry and Broken Hill Mine –– will also be available to all players free of charge, however will release on Xbox One first on March 30 before being released on Playstation 4 and PC a month later, on April 30.

Players who don’t own the downloadable content will still be able to play against those who do online and offline in order for added “replayability for the entire Evolve community without dividing players”.

As previously stated, the new monsters, hunters and Observer mode will be available on all platforms from March 31.

Currently an English, Journalism and Creative Writing student at the University of Strathclyde. Based in Glasgow, I spend most of my free time playing video games ranging from Japanese visual novels to horror games. You can contact me at greg@godsiageek.com!
MORE LIKE THIS
2kDLCEvolveTurtle Rock Studios