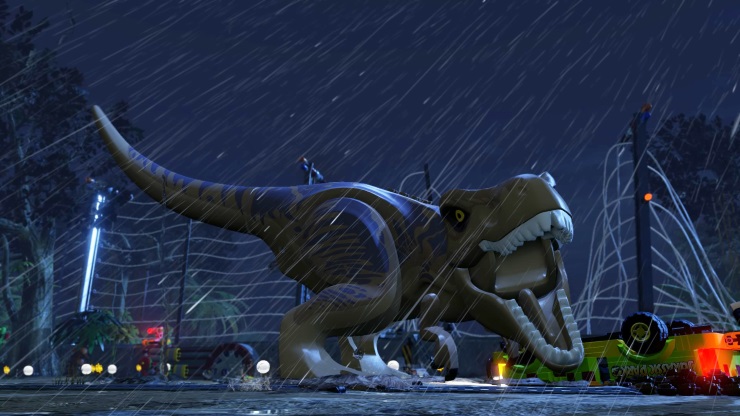 Growing up, two of my favourite things were dinosaurs and LEGO, so the combination of them in LEGO: Jurassic World would be a dream come true for seven year old me. And of course that’s exactly the age range it’s aimed at, but from my short hands on it seems TT Games have managed to keep the slightly dark atmosphere from the films while making them child-friendly.

Despite the name, it contains levels from all four films (five from each), which you can choose to either play chronologically or jump straight in with the new stuff. The section I was shown contained four levels from the first film – anything from Jurassic World is being kept tightly under wraps – starting with taking control of Ellie as she tries to cure the sick Triceratops.

If you’ve played any game in the series before, Jurassic Park will be familiar to you: you control various characters from the subject matter, who each have their own special abilities. Ellie can delve in dinosaur poo for clues and grow plants to act as platforms, for example, while Gerry Harding has a rifle used to shoot targets. Using these powers you’ll have to complete a simple objective: find certain items around the level, or build a contraption of some sort. Things get really interesting when you heal the Triceratops, though. When she is fed an apple, a carrot and an ice-lolly (remember, this is a LEGO game) you can take control of her, using a charge attack to knock down barriers leading to the next area. It’s a nice change of pace from the bumbling LEGO people, and despite looking like a plastic toy, the dinosaurs are well animated. There will be twenty to collect in the full game, kept in an island hub – and you can battle with them.

Even cooler is the dinosaur-maker. Like the character part swapping of previous games in the series, it allows you to swap parts between dinosaurs to create your own king of the reptiles. There will be some restrictions due to the varying sizes of dinosaurs, but there will still be hundreds of combinations. Other collectibles include dinosaur skeletons, unlocked by collecting the ten bone boxes found in each level. These live in another section of the island hubs, and you can take them into missions and play with them.

Another scene I played through is the T-Rex breakout from the first film. It’s as atmospheric as the film, with the rain lashing down and thunder rumbling in the background as you try to rescue the kids from the overturned car. TT Games’ way of reducing the scare factor has been to treat the dinosaurs as pets, so you’ll distract the T-Rex with a giant bone before building a lever to raise the car from the mud. It works, with slapstick comedy taking the edge off the deaths. The lawyer who gets eaten after hiding in the loo gives the T-Rex’s teeth a scrub with a toilet brush before going down. A chase sequence follows directly on from this scene, the car constantly moving towards the camera pursued by the T-Rex, you’re tasked with dodging obstacles and picking up collectibles. Again it’s pretty simple, and it never feels like you’re in real danger, but it conveys some of the tension in the films.

They’re keen to educate as well, with loading screens using a LEGO Mr DNA giving out facts about various dinosaurs of the period, which is a nice touch. My only real concern so far is the voice acting, which is ripped straight from films. While that is great for authenticity, some of it is really muffled, and I could barely understand Jeff Goldblum during the T-Rex scene.

LEGO Jurassic World is looking like a classic LEGO title, then. Simple platforming and puzzles tied to dozens of collectibles, the dinosaur maker promising to be hours of fun, and the team’s desire to make a proper Jurassic Park game could mean this is the best game in the series in some time.

Preview based on time spent at Warner Bros. hosted event.

You can find me on Twitter and PSN as MacShanks, and feel free to hit me up if you have any questions, queries or feedback!
MORE LIKE THIS
Jurassic ParklegoTT Gameswarner bros