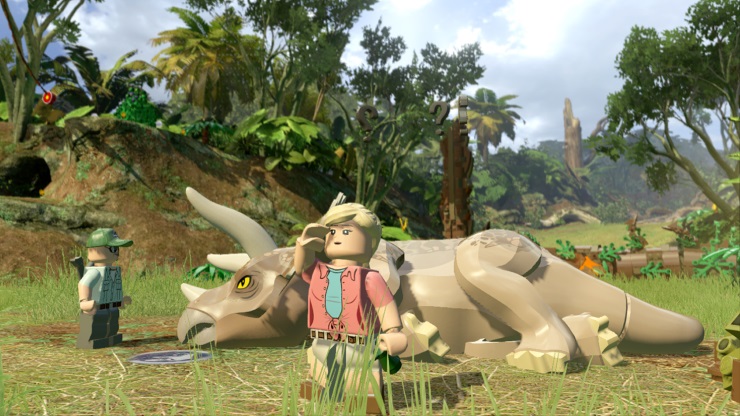 I recently had the chance to sit down with Tim Wileman, Assistant Producer on the upcoming LEGO: Jurassic World. The game will have content from the first three Jurassic Park films, but naturally the first thing I want to know about is the new film, and just how much of it TT Games have had access to.

“We’ve had cuts of the film – we’ve had to really – we want to stay true to the original source material as much as we can, and we want to do it justice. I think it’s a game not only fans of our games, but one gamers in general have been after for a while now; an authentic, proper Jurassic Park game. There have been some in the past that maybe haven’t been so good, and we can deliver that this time, we want to deliver the authentic Jurassic World experience, but not only that, we want to do the other three films the justice they deserve.”

Understandably they have to be careful about what they say concerning the new film, with so much of it being kept under wraps until it hits cinemas in June. Of course, it isn’t often that the developer’s have had to work with a source film that is yet to come out – Harry Potter, Star Wars and the like were already released – so it is perhaps surprising that it hasn’t been too difficult making things work. “We did something similar with Pirates of the Caribbean, but that was a while ago. I think the most frustrating thing is that you want to talk about all the wonderful content, I mean this is going to be an epic film and it’s packed full of content, characters, events, dinosaurs, a wealth of content we really want to talk about, but we can’t, so I think that is the most frustrating thing.

In terms of challenges, yes there are challenges but we’re lucky to work with fantastic partners on this, so we’ve got Warner Brothers, Universal, we’ve got the filmmakers as well, including Colin Trevorrow and Steven Spielberg, and they’ve all been fantastically helpful on this, they’ve given us exclusive access to a wealth of content, which is all going to help make this the most authentic Jurassic World experience possible.”

Authenticity is something they’re striving for, but Jurassic World could prove to be tricky given they’re turning a series with some quite frightening scenes into game for all ages.

“We want to do it justice, the franchise and the film, but obviously there are times where we have to be a bit careful about what we do. Ultimately we’re making kids games here, they’re suitable for all ages, but we want to do it justice, we want the older audience to appreciate what we’ve done, so it’s about finding that balance between creating the atmosphere and the tension from the original films but at the same time balancing that with humour, our own unique brand of humour, and whether that’s slapstick comedy or a nod or a wink here or there it’s something the guys at the studio do fantastically well and again with Lego: Jurassic World we’ll find that balance.” The conversation turns to past titles, and how the last few iterations have drawn criticism for not offering anything particularly new. I would have thought this could be a cause for concern, but Tim doesn’t think so.

“I’m not worried. Talking from my own perspective having worked on Lego: Jurassic World, the Jurassic Park franchise brings in a wealth of content that we can use, all new, all fresh. Not only the locations, not only the characters, not only the story, but also the dinosaurs, they’re the real heroes of this franchise, and we’ve been allowed to take those on. We’ve created twenty playable dinosaurs – that’s the first time we’ve done anything like that – and not only can you play with these dinosaurs but you can also customise them in the customiser and create thousands of variations to populate your island and do battle with. There’s a wealth of opportunities and content in addition to that, we’ve got the droppings mechanic Ellie will use throughout the game, and there’s also a lots of stuff in film four that unfortunately I can’t talk about. We really want to push the boundaries in terms of what we can do and what we can bring to our games.”

The dinosaur customiser could well be the freshening up that the series needs, allowing you to piece together different dinosaurs in much the same way the scientists in Jurassic World create the mysterious Indominus Rex. Making all those possible combinations work together hasn’t been easy though. “It is a challenge. We’re lucky we work with a fantastic team on this, they’re fantastically talented group of guys and they work very hard in making sure these are all scalable, fit in the right places and that they animate correctly and look okay. And it’s not just the animation and how they look, it’s their abilities as well that have to be factored in, so if you’re playing with a Triceratops’ head you’re going to be able to utilise the Triceratops’ ability which is charge and smash, it’s all about how they incorporate those as well as the combat element. We want that to be seamless, to look as it should and do it justice.

You have to be a bit careful though, not everything is possible. There’s a tiny little dinosaur called a Compsognathus, you can’t put its head on the body of a Triceratops because that would look a bit strange, but where we can, we have, and we’ve worked extremely hard to make such all the proportions are correct and all the scaling and everything like that, and it does look genuinely cool. Some of these creations are going to be awesome, you can change literally everything, all the colours and the textures you can change.”

When you’ve created these dinosaurs you’ll want to use them, and how better than by battling them with each other. I asked Tim for some more details on exactly how that worked.

“So they’ll be a special area on one of the island hubs where you’ll have these paddocks that you’ll be able to populate with your dinosaurs – customised dinosaurs and regular ones – and they’ll exist in that virtual world, going about their business. But you can also take control of these dinosaurs and you can fight with other dinosaurs in these paddocks, whether they are human or AI controlled, and you’ll be able to use the abilities you assign them in the customiser or their generic abilities. So, for example, the Triceratops has a charge smash, the Dilophosaurus who can spit acid projectiles from its mouth, you’ll have the Velocoraptor that can pounce on other dinosaurs and Ankylosaurus which has a big club tail that can smash other dinosaurs down. So there’s a bunch of different stuff, and with all the thousands of combinations in the customiser it’s going to be a lot of fun.” Of course the campaign will be the main draw for a lot of people, but as this is a film tie-in of sorts, I wondered if gamers would have to play through the first three films to get to Jurassic World’s content. Tim assures me that the developer has thought of this.

“We are offering the opportunity to start with the film four content at the start of the game, so you can if you wish go straight to the film four content, fans of Jurassic World can drop straight in the Jurassic World content, or you can decide to play through the level chronologically. It’s designed in such a way that you’ll need to play through films one two and three chronologically. Film four will be slightly separate.”

Tim grins at the final question: where does he store his Ketchup?

“I keep it in the fridge, along with my chilli sauce and garlic mayonnaise.”

Thanks to Tim for his time.

You can find me on Twitter and PSN as MacShanks, and feel free to hit me up if you have any questions, queries or feedback!
MORE LIKE THIS
Jurassic ParklegoLEGO Jurassic WorldTT Games