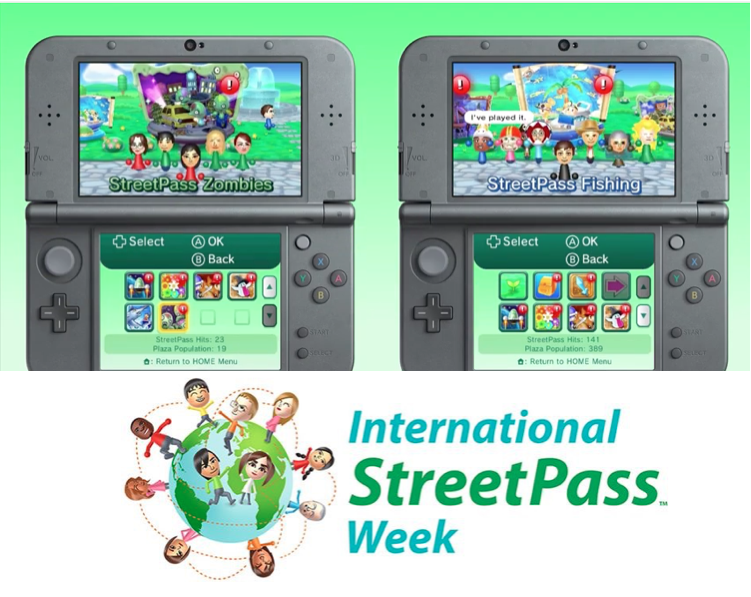 Nintendo have announced an International StreetPass Week to coincide with the launch their new StreetPass Plaza Mii games.

The celebration of StreetPass, lasting from April 16 – April 27, will allow players to meet and interact with other people’s Mii’s from across Europe, Asia and the U.S. Players will also be gifted with a Mii-version of Nintendo of Europe President Satoru Shibata as well as a free commemorative 3DS theme by connecting at participating StreetPass Relay locations (GAME stores in the United Kingdom).

StreetPass: Fishing and StreetPass: Zombies are rolling out to all Nintendo 3DS consoles on April 16, available to players by simply updating the StreetPass app. In StreetPass Fishing, players visit islands to try to catch more than 150 types of fish and legendary monsters with bait received from Mii characters via StreetPass. In the more action-oritentated StreetPass Zombies, players receive weapons based on the hobbies of their StreetPass Mii Plaza characters to defeat a horde of zombies. See a trailer for both games below.

Currently an English, Journalism and Creative Writing student at the University of Strathclyde. Based in Glasgow, I spend most of my free time playing video games ranging from Japanese visual novels to horror games. You can contact me at greg@godsiageek.com!
MORE LIKE THIS
GAMEmiinintendonintendo of europe

RPG Tanzia is coming to Switch this year