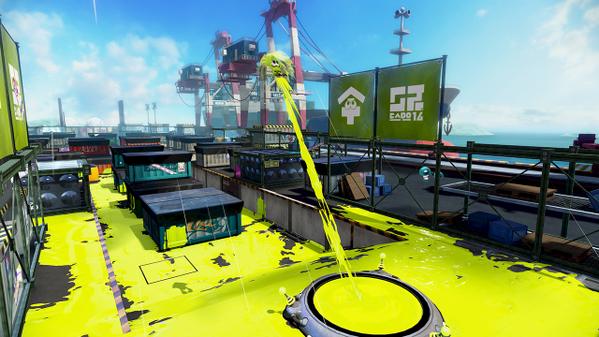 It appears that enough people have hit rank ten on Splatoon now, and as a result Nintendo are opening up the Ranked Battle segment of the Multiplayer component to everyone.

Ranked Battles are conducted in a different game type to regular battle Turf Wars. In Ranked you have to fight for control of an area of the map, the team with the most colour in that will control it and cause a ticker to increase. The team that gets their ticker complete first will win the battle.

That’s not all though, also coming tomorrow are one new weapon and one new stage.

The weapon takes the form of Nintendo’s Zapper from Duck Hunt, and will apparently be a rapid fire weapon. It’ll be interesting to find out what the sub and charge capabilities of this will be.

The new stage will be Port and Mackeral, which will take place in a large area filled with shipping containers, creating many claustrophobic alleys and high areas for you to get the drop on your opponents. Also populating the arena will be moving trucks creating the first dynamic element of any of the maps.

A lover, not a fighter and an all round good guy (he would say that, he wrote this after all), he's happy to be here as part of GIAG.
MORE LIKE THIS
nintendoSplatoonWii U