previous
Planet Coaster Coming in 2016
random
next
StarFox Zero Preview - Can it Capture Past Glories?
3 comments 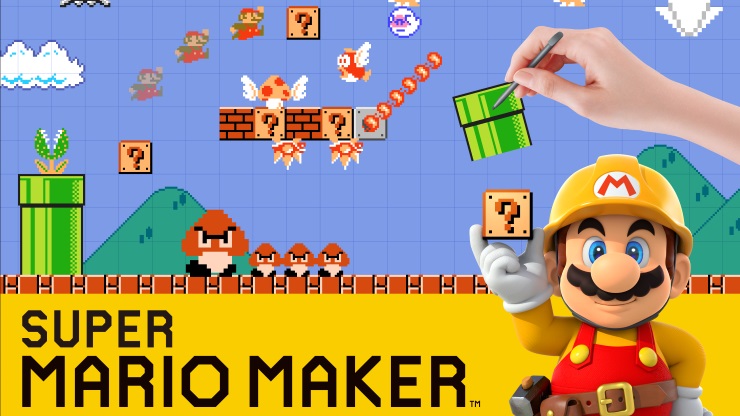 Modders and ROM hackers have been making insane Mario levels for almost two decades now, and while late to the party, Nintendo finally wants in on the action. A skeptic might suggest Nintendo wants to centralize and control this behavior. A more forgiving person might posit that Nintendo just wants to facilitate the creative process. Whatever your take on it, Nintendo’s Super Mario Maker will finally make the creation of original Super Mario levels a company-sanctioned activity when it releases this fall. As soon as players start up the Create mode, they can get started on their levels. Using the stylus and the Wii U GamePad screen, players can navigate an easy, drag-and-drop, tile interface, grabbing enemies, blocks, and pipes from a menu and dropping them wherever they want in the game environment. Want a particular enemy, simply select the enemy drop down and gain access to a library of Mario baddies, new and old. Want to change the level to underwater or underground? Want to swap out 8-bit Super Mario Bros. visuals for the look of New Super Mario Bros? Again, these options are just as easy as selecting each from a drop down menu. Customization feels appropriately intuitive and very much in tune with Nintendo’s design philosophy.

Nintendo has also streamlined the level testing process. Once a player has a section of the level ready to test, he or she need only press the “Start” button in the lower left hand corner of the screen to immediately start playing and testing the custom stage. And to make fine-tuning stages easier, the player’s movements through the stage are recorded as a kind of ghost trail or residue that lingers. This way, if a particular jump is impossible or a piece of environment turns out to be a hindrance, players will know to move a block one or two tile spaces over or place an enemy slightly lower or higher on the screen. Through trial and error, and good planning, people can craft complex and engaging stages. The tools Nintendo has developed are not only versatile but also allow for countless, unexpected combinations. Placing a mushroom item on top of an enemy makes them grow to monstrous sizes. Enemies can be stacked atop one another to create walls of independently moving death for the player. Based on my time with the Create mode, I can imagine truly skilled creators will be able to use these tools to craft brain-bending Rube Goldberg machines that unfold before the player’s eyes, either resulting in Mario being sent zipping across the screen or barreling toward his demise. Fortunately, players can’t upload levels until they are capable of being completed, which should prevent at least a certain level of trolling.

Speaking of sharing levels, the game will no doubt garner a strong creative community around it once it releases this fall. Unfortunately, if the level sharing feature of Super Smash Bros. Wii U is any indication, Nintendo does not have a good track record when it comes to searchability for its user-generated content. One way Super Mario Maker will attempt to solve this problem is by supposedly generating codes for each level created. Would-be designers can then share their level’s code via social media, so their friends and followers can find it without trouble. When I asked about other search functionality, I wasn’t given a straight answer, so beyond level-specific codes, we might be out of luck. The only significant limitation I could see was that the creation tools did not seem to allow for verticality in the levels. While I could scroll horizontally across levels, I did not see an option for vertical scrolling. This feature may well be in the final game, but it might be a small blemish on an otherwise promising level creation tool. Indeed, the difficult part here in not creating the level on the GamePad but designing the level in the first place. This is how it should be and allows players to concentrate on design rather than wrestling with the software.

Finally, for those who enjoy playing Mario games more than the promise of building them, Super Mario Maker will come packaged with over eight worlds of pre-made levels from folks at Nintendo. So, even if you don’t want to jump right into the robust level editor, you can still enjoy dozens of wacky stages that get more bizarre and difficult in later worlds.

Super Mario Maker might be an important first step for Nintendo. It not only signals that the company recognizes the growing interest in user-generated and fan-directed game content, but if successful, the game might also lead the way toward the development of similar concepts for other Nintendo franchises, like the Legend of Zelda.

A media scholar who also writes about video games for various outlets. He's interested in digital game production, media industries, residual media, and discourses around gender, race, and sexuality in media and production cultures.
MORE LIKE THIS
nintendosuper mario makerWii U