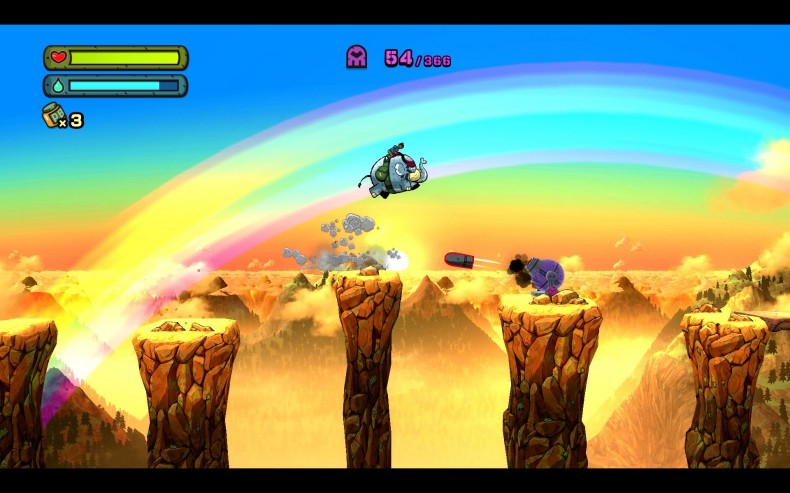 Lets just stop for a second and appreciate the name of this game: Tembo the Badass Elephant. It’s good isn’t it? But what makes it so perfect is that the image it conjures up, the first one that flickered into your mind, is exactly what the game is. Tembo and elephant combine to form a cutesy, cartoony image, one that sets the brightly coloured art style found in the game; hell it could come straight out of a kids picture book. Then you combine elephant and badass, which again is exactly what you expect; a giant, crazed mammal going on a rampage. Mix those two images and you get Rambo as told to kids.

From Game Freak, who you may know as the creators of Pokémon, Tembo the Badass Elephant is a 2D platformer where the aim is to not only get from A to B, but to destroy any members of the opposing forces and save innocent civilians along the way. Drafted in from retirement to fight against an invading force, you jump and charge your way through levels, combining these abilities to solve puzzles and defeat enemies.

For example Tembo can perform a vicious uppercut, bounce around in a Sonic-esc ball and shoot water from his trunk to put out fires or grow seeds. In truth the two zones – ten levels – I’ve played haven’t been too difficult, with only the odd enemy or puzzle causing a bit of a headache. Indeed, ala Sonic, longevity comes from going back over levels, combing them for the missing enemies or civilians that will allow you to unlock the next stage. Not being too difficult is not a bad thing though, as Tembo is a joy to play. You can see from the screenshots that it looks great, and it’s even better in motion, with the elephant smashing his way through walls and buildings with the appropriate amount of chaos. Level design is great as well, first a vibrant jungle, then a war-torn city and then a mountain range, there’s a pleasing variety. Little touches, like the way civilians appear on your back once you’ve rescued them, give the game a great sense of personality as well. Quite simply it’s fun to look at and to play.

There are some issues though. Going back over a level for the third time gets a little old, and Colm had some frame-rate issues on PC, and it can be far too easy; the first proper level-to-itself-boss took a literal 15 seconds, knocking it backwards into a lava pit faster than it could damage me. Given regular enemies have taken me much long this was a massive shame.

Overall though things are looking good for Tembo. If it ships with enough levels and keeps up the quality of level design so far shown then this could be a very good  platformer indeed.

You can find me on Twitter and PSN as MacShanks, and feel free to hit me up if you have any questions, queries or feedback!
MORE LIKE THIS
game freakTembo the Badass Elephant