Finding Your Moral Compass in The Witcher 3 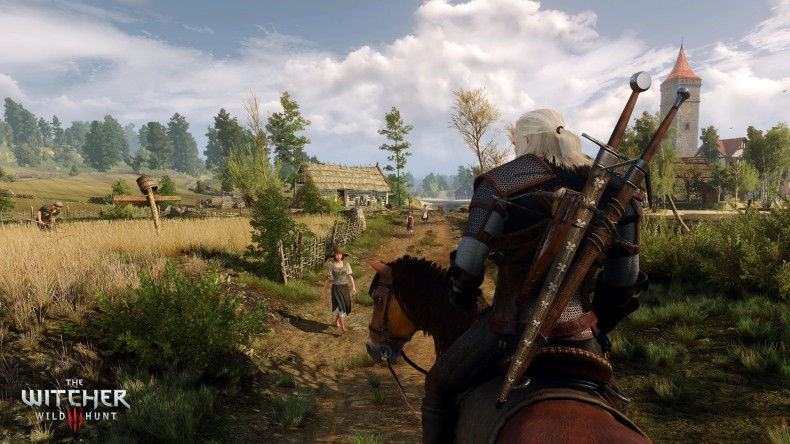 Warning: this article features some mild spoilers for a side-quest in The Witcher 3: Wild Hunt. If you haven’t left White Orchard yet, you may want to give it a miss.

I felt uncomfortable staying a second longer than necessary in the village last night. In fact I ended up picking one of the question marks on the map to the west, setting a waypoint and just walking out to see what awaited me. I decided staying off the beaten track was the best course of action, not because I’m in any rush, but because I really don’t want to be around other people for a while. I’m only about three or four hours into The Witcher 3, having just collected some of the ingredients for the main quest by doing a bit of swimming. I seem to be set to take on the Griffin, even though my current level says otherwise. For the moment though, I really just need to get away for a bit. I feel a bit thrown by what has happened and all over a decision I made. So far, it’s been playful dialogue, a game of Gwent, an easy bar brawl and some light scolding and cursing from the villagers. I’ve been to the fort and got myself a bounty. It was all going to plan.

I met the cart guy and I listened to his tale of woe and with my best side quest helping hat on, took a journey into the swamp, found what I was meant to find, raising more questions than answers. Obviously this led to a chase, then the confrontation and then the blind decision. I’m still fresh to the game so I don’t know where to show my allegiances to. I based it on the apparent sob story which I’ll no doubt find out the truth of later. I even let the cad keep the treasure, which I’m sure was worth some much needed coin. I’m as poor as a church mouse with a large stained glass window cleaning bill and I’m still not sure where the cheese is kept.

So with doubt weighing heavily on my decision, I head back to the village, clearing out a house on the way of a massive amount of loot while helping someone with their kitchen equipment. My morals are my morals you see, and therefore if I want something I’m going to take it as long as no one else is looking.

This takes me onwards to the smoky ruins of the Smithy. One over-acted Scottish accented tale later and I’m off on a hunt to find an arsonist. It doesn’t sit well with me that someone should have their livelihood destroyed because they are being forced to help the occupying army with their ‘smithing’ requirements. After all, everyone under the oppression of an army is a secret revolutionary (aren’t they?) and he is angry and Scottish. I was surprised he didn’t yell freedom. Besides, you have to help the blacksmith, it’s part of the gaming law. Whether it be fetching a rare item, getting them an ember, these are the guys who help you improve your weapons and they are always good eggs deep down. So let’s go on a bad guy hunt.

The trail is hot, easy to find, and it’s not too long before I’m led to a drunk whom I saw in the tavern only ten minutes before. I find him back at his house. He threatens me, even though I could kick his arse within a second without even trying, but he’s adamant he’s going nowhere.  He offers me some cash to let him go. I’m not about to make another rash decision here. So I reject his offer. I get one more chance to let him go and then, tiring of the whole situation, I decide to use some mind control to drag him slowly through the village. It’s frustrating: he’s blind drunk, staggering all over the shop and at several points he ends up so far behind me that I have to stop so he can catch up. The Smithy itself is only around the corner, so when I do get within ten feet I walk up to the short wee hammer man and trigger the cut-scene.

The drunk man is released from his spell, which for some reason also clears his head completely. Obviously he can’t remember a thing that’s happened, and even the smith has a look of surprise on his face, reminding the lad of all the work he used to do for his mother for next to nothing before she died. So they know each other, so trope, so good.

What I was expecting was an apology. I was expecting the drunk to offer to help rebuild the forge to atone for his actions. I was expecting to have to persuade the smith to agree to his offer of help. I wasn’t expecting the dwarf to shout for the guards, especially  not in the calm matter of fact manner he summoned them, or for the guards to bluntly tell me the act was essentially one of terrorism against the occupying army, and that the drunk was to taken away and hung. No trial. No chance to intervene. The guards were nowhere to be seen when the cut-scene finished. I was only given the choice to scold or agree with condemning a man to death. The Witcher 3 had pulled the rug from beneath my feet with my RPG muscle memory for decision making. I could have let the drunk go. I thought I was doing the right thing. But now? I’m really not sure about this at all.

So I walk instead, and hopefully this place where I’m heading to, this unknown quest on the map, will help me move past this moment of bad judgement. The slight pain I feel? It’s the claws of this magnificent game digging in that little bit deeper. Or is it the guilt that maybe this time I  was actually the bad guy.

MORE LIKE THIS
CD Projeckt RedThe Witcher 3: The Wild Hunt