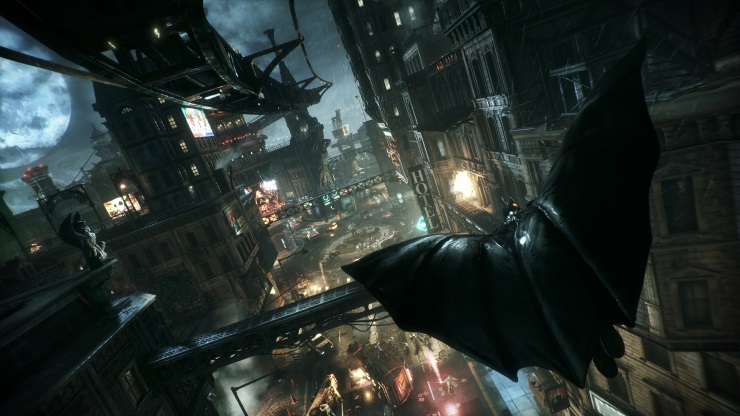 Warning: This article contains massive SPOILERS for Batman: Arkham Knight and The Killing Joke graphic novel, with references to several plot twists and the ending. If you haven’t finished the game yet, or are planning on getting it in the future, DO NOT READ THIS. You have been warned, so no complaining in the comments.

Batman: The Killing Joke is considered to be one of the greatest Batman stories ever told. Written by Alan Moore of “Watchmen” fame, it’s a dark, violent story that delves into the Joker’s origins, charting his rise from a failed stand-up comedian to the “Clown Prince of Crime”.

In many ways, Batman: Arkham Knight is similar. With a heavy focus on the Joker, it’s a dark tale even by Batman’s standards, and the revelation of the Arkham Knight’s identity is a sucker-punch to the gut. Of course, this similarity to The Killing Joke is no accident. Mid-way through Arkham Knight we see Barbara Gordon being paralysed by the Joker, an event that took place in Moore’s graphic novel. It’s replicated perfectly, even down to the Hawaiian shirt worn by the Joker as he pulls the trigger. Indeed, the series as a whole has dropped references to the seminal Batman story; in Arkham City for example, the Joker retells his origin story as told by the graphic novel. But here’s something that may be controversial; as good as The Killing Joke is, I think Arkham Knight is even better.

Like The Killing Joke, a large portion of the narrative is concerned with the symbiotic relationship between the Dark Knight and the Joker, and how the two represent the eternal conflict between order and chaos. While a fear of bats may have caused Bruce Wayne to adopt them as his mantle – conquering that fear in the process – his initial exposure to Scarecrow’s fear toxin reveals what Batman is terrified of: madness, insanity and the breakdown of order, all symbolised by the Joker. Arkham Knight becomes a psychological tale then, but with the action that player’s would expect. As good as Christopher Nolan’s Batman trilogy was, it was more spectacle than substance. When juxtaposed with that, The Killing Joke is tight and story driven, but lacking in action. Arkham Knight strikes this balance perfectly, with plenty of actual game mixed in with the story telling.

The battle between order and chaos is nothing new to any form of media, but how the perception of it is dealt with here is unique to video games. In a novel or a film, while we can question the reliability of the narrator, we are removed from the protagonist in some form. In a game though, we are the protagonist, and thus inherently trust that what we see and do is the correct representation of events. Except of course, we can’t trust the Batman for the majority of Arkham Knight, as his perception is tainted by the Joker’s presence. His occasional tableau of an event in Batman’s past, Barbara’s shooting, the torture and death of the second Robin, Jason Todd, show his ability to manipulate what Batman is seeing; on more than one occasion every thug turns into the Joker. As players, how can we trust that what we’re seeing through Batman’s eyes is ever real? More than just in the obvious scenes, Batman’s perception is altered constantly. The statues outside the movie studios gain Joker heads that disappear when you turn back to look, and you’ll find the clown around the city at certain landmarks, where he’ll offer a comment on how the night is going. Of course these comments offer comic relief, jokes at Batman’s expense, some of which are actually quite funny, but underlying them is a dark tone. It’s also worth remembering that as they become more frequent towards the end of the game, these jokes are coming not from the Joker, but from Batman himself, their frequency charting his slide into madness.

Because we can’t trust Batman’s eyes, we’re never quite sure if the Dark Knight has broken his only rule: to not kill. On more than one occasion it certainly appears that he has killed. Towards the game’s close he snaps a Joker figure’s neck, only for the body to fall to the ground and disappear, along with any remaining Joker “clones” in the background. However, given that in earlier instances of thugs morphing into Batman’s arch-nemesis they’ve eventually returned to normal, could it be that upon breaking the Joker’s neck, Batman did finally snap? There isn’t really an answer, but it’s worth comparing Arkham Knight again to The Killing Joke, which ambiguously ends with the Batman joining in with the Joker’s laughter and reaching for the clown’s neck.

Of course, Batman triumphs in Arkham Knight as well. In a turning of the tables, we get to see the Joker’s fears. Obviously the Batman is in there, the Weeping Angel-esque statues that relentless pursue him, but surprisingly his biggest fear is to be forgotten. We walk through an empty wake, with only Harley Quinn left to weep over his body, before catching a radio interview where the guest can’t remember which villain the Joker is. The last we see of the Joker is him disappearing in a cage, chained up deep within the Dark Knight. But this loneliness, this fear of being forgotten, makes him incredibly human. At the end he isn’t a master criminal, all his terrible deeds are forgotten. He’s just a man, scared and alone. Again, this is comparable to The Killing Joke, which also takes pains to humanise the Joker. His back-story reveals how he turned to crime to support his pregnant wife, and the tragedy of her death combined with being strong-armed into a botched heist and falling into a vat of acid finally breaks him.

To seal the symbiotic relationship, with the Joker gone, Bruce Wayne finally feels that he can reveal himself to be the Batman. It’s a poignant moment. Both have been stripped to the bone, their fears shown, but while the Joker succumbs to them, Batman manages to overcome his.

Arkham Knight may draw heavily upon Alan Moore’s masterpiece, but in doing so it surpasses it in terms of story, delving further into the Batman’s psyche and his relationship with the Joker than any story before. It’s a fitting end to Rocksteady’s trilogy, and one that’s going to be difficult to top.

You can find me on Twitter and PSN as MacShanks, and feel free to hit me up if you have any questions, queries or feedback!
MORE LIKE THIS
Batman: Arkham Knight