My Lovely Horse: Roach Vs. D-Horse 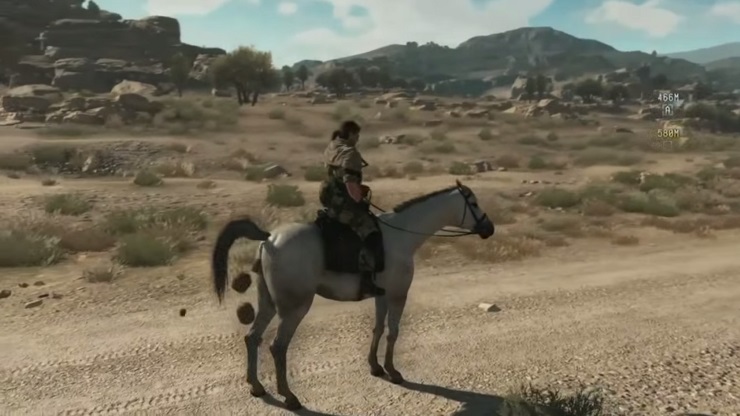 Two of the biggest and best games this year have had horses play a pivotal role in how you traverse their expansive and beautiful worlds. There’s The Witcher 3’s petulant mare, Roach, and Metal Gear Solid V’s valiant stallion, D-Horse. But one question still remains: which horse is the best horse?

There’s only one way to find out… Rating them on a list of mostly nonsensical characteristics that I will, probably, arbitrarily decide the winner of!

Now, both are fine looking animals and I’m by no means suggesting that any living creature should be judged on its appearance alone, but it’s something we all face and these two horses will be treated no differently. I feel as if this may be a contentious decision, but Roach just beats out D-Horse here for me. Her luscious chocolate brown coat is a delight, and a tad more exciting than D-Horse’s white get up. Also, Roach dresses better too. D-Horse’s battle dress may be practical, but it’s flat out ugly. Roach, on the other hand, looks badass with a griffin head adorned on her side, or any slain beast of your choosing. Roach is an able runner, no question; when on a paved path or road she can run for hours, getting you from Novigrad to Oxenfurt pronto. However, when the roads are blocked by soldiers and you need to travel as the crow-flies, that’s when she becomes unreliable. On uneven terrain she’ll tire quickly, making a journey through forests a tiresome ordeal.

You’ll face no such issues with D-Horse. No terrain is too rough, uneven or unpredictable for him to manoeuvre on. Be it moving sand, solid rock or paved road, D-Horse will never falter, getting you out of that tight spot sooner than you can say “Do it”, especially needed when those terrifying Skulls are right on your tail. I love Roach, please don’t mistake me, but she ain’t half bloody stupid. Her ability to constantly get stuck in leaves, between trees or on hillsides is truly unprecedented, making the quick escape occasionally lead to a quick death. D-Horse, on the other hand, is an incredibly intelligent animal. Call him from anywhere and he’ll be by your side instantly. His greatest ability is to realise that you’re running away from danger, and will run up alongside you so you can jump on, rather than having to stop and risk being spotted, or worse, shot. He has occasional lapses in concentration, but they can be forgiven when he’s so reliable in a tight spot

Much like intelligence, it’s really no question which horse is better at traversing any environment. In fact, D-Horse might just be the best horse in the entirety of video games at leaping over obstacles. No matter what’s in his way, be it boulders, fences, small ledges, D-Horse will soar over it as if it wasn’t even there and carry on with his journey, never breaking stride. Roach? Well… er… she seemingly gets annoyed if she has to run up a slight incline. She makes the biggest meal imaginable out of vaulting fences and boulders. Ledges? Forget about it.

Feels like D-Horse is sweeping up a bit here, doesn’t it? But it’s another undisputed victory for him. The sight of a small pack of wolves or even a crew of ragged bandits is enough to get Roach up on her hind legs and making like the wind, throwing Geralt to the ground to face whatever dangers lie in wait. You don’t get that kind of cowardice from D-Horse. It doesn’t matter if mortars are falling from the sky or if bullets are whizzing all around, old DH will remain head strong in his task and will never abandon you. Carrying stuff is a vital utility of any horse, and in this case, Roach is the winner. Take a gander through your saddle bags; what’ve you got there? About 15 swords, six month’s worth of rations, enough potions to get arrested with, a library of books and documents, a load more mostly useless junk? Don’t worry, Roach can carry it all and still maintain speeds as swift as the wind. D-Horse? You can probably stick an extra human on his rump or something, but he doesn’t carry much else.

For all of D-Horse’s undeniable positive attributes, he does need a guiding hand in a lot of what he does. It’s up to Snake to guide DH wherever they are to go- he won’t simply go there himself. Unlike Roach, who if set on the right path, will find her own way and will follow the road without the aid of Geralt. While D-Horse can defecate with aplomb on command (which isn’t very realistic now I think about it), it’s really no contest as to which horse is the most realistic of the two. Although Roach’s realism may be what lets her down in a lot of the above categories, it can’t be denied that she acts like any normal horse would. When danger is surrounding and death is probably imminent, she bolts like the wind and gets the hell out of there, and rightfully so. Though, the real way Roach wins this round over D-Horse is the way they act when you leave them unattended. Leave Roach near some water, and she’ll take a drink. She might graze a little, move around a bit, stretch those legs. D-Horse, on the other hand, will remain bolt upright and in exactly the same place until called upon. Not moving a single muscle, not even blinking, I’d bet. Loyal and convenient? Yes. Realistic? Hell no!

What’s that? We’re tied? What a comeback from Roach. After initially being 4–1 down, she’s clawed it back to 4–4. So everything’s on the line as we go into the final category…

This is it, the biggie, the one everyone wants to know the answer to. Who is faster? Who would win in a straight race between Roach and D-Horse? Well, I’ve found out. To settle once and for all who is the faster steed, I took to both games, set a marker for 200m in the distance, on an obstacle-free road, and timed who did it faster. The results are as follows:

Oh it’s close, very close, a matter of milliseconds separates them, but D-Horse just edged out Roach in the time trial, and the competition as a whole, to win the title of “Best Video Game Horse of the Year”.

So there you have it, the question everybody wanted to know, comprehensively answered. You can thank us in the comments section.