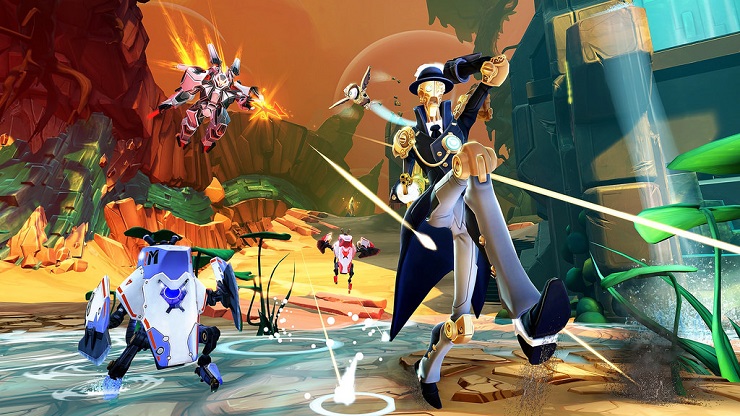 2K has announced that Battleborn, will see its multiplayer open-beta hit the PS4 first.

At the PlayStation press conference at Paris Games Week, 2K also showed off footage from its competitive multiplayer, including the modes Capture, Meltdown and Inclusion.

Battleborn lets you play as 25 playable heroes as you fight to save the last remaining star in the entire universe from being completely destroyed. Speaking on the PlayStation Blog, 2K Producer, Chris Thomas had the following to say. “You’ll play through Battleborn’s story mode and competitive multiplayer modes as everything from a laser-sword wielding space vampire samurai and a man-mountain with a mini-gun, to a psychotic gentlemen robot and a… walking, talking mushroom.”

As for the multiplayer modes that feature in the video at the bottom of this article, ‘Capture’ is a classic capture and control between two teams of heroes, ‘Meltdown’ has been described as a “homicidal robotic sport” where you score points getting as many of your minions incinerated at the ends of the lanes on your map and ‘Incursion’ has you defending your base from waves of AI-controlled minions

The PS4-exclusive open-beta is planned for an early 2016 release.

Video games are cool. Don't let anybody tell you any different.
MORE LIKE THIS
2kBattlebornGearboxParis Games Week