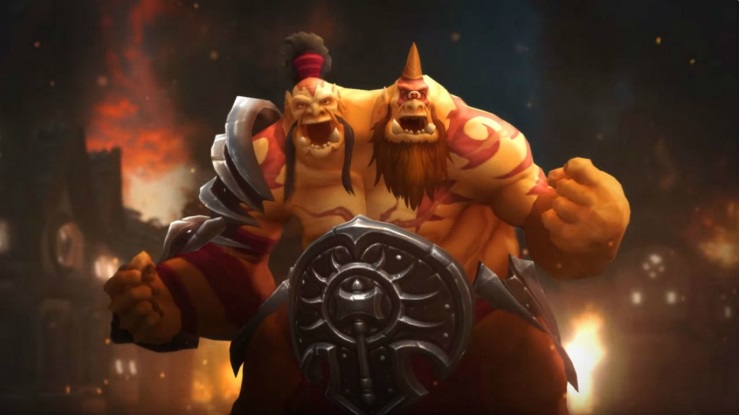 Blizzard’s annual fan party / convention / eSports event, Blizzcon, took place this past weekend, and as ever it kicked off with an announcement packed opening ceremony. Developers of each of the major Blizzard titles walked out on stage to receive a hero’s reception and announce some cool new stuff. Having only launched earlier this year, many expected the Heroes of the Storm portion of the keynote to be fairly light on new announcements, yet with one announcement Blizzard managed to rock the entire MOBA world by introducing two totally new concepts to the genre.

Cho’gall is the latest hero to be announced for the Blizzard MOBA, but in reality he isn’t one hero at all, he is two. Being a double headed ogre offers up the possibility for two players to control one hero. The physical being of the hero must be kept together, but both ‘heads’ if you will, have their own set of abilities and characteristics. Cho is a Warrior, with abilities focused on AoE damage and staying alive, while Gall is the Assassin damage-dealer. The person who is controlling Cho will control the hero’s movement, and of course Cho’s abilities, while the player controlling Gall will only have control of Gall’s abilities. Having two players control what is really a single hero is a totally new idea in the MOBA space. Nothing like it has ever been done before in any of the major titles despite how obvious an idea it should be. Not only is this a genius idea, and incredibly well implemented lore wise, but it should also improve players’ skills in-game. Both halves of Cho’Gall will have to communicate with the other player if they want to win, which is a vital yet incredibly underused skill across all MOBAs. Any team that is communicating even slightly has a much better chance than a team that either isn’t saying anything or is just throwing abuse at each other.

Unfortunately, Cho’Gall isn’t actually playable just yet in the public version of Heroes of the Storm (although he was playable at Blizzcon) so just how well the implementation will work from a gameplay standpoint is yet to be seen. But based on the information available right now I can see no reason why this wouldn’t work. Sure, there will be times when a Cho’Gall totally ruins a match due to the players arguing, but I honestly think this could the start of a new trend of multiple player controlled heroes in MOBAs.

However, Cho’Gall isn’t just interesting because of the way that he plays. During the announcement fans were already excited to see this totally new concept come into Heroes, but perhaps the more interesting side of Cho’Gall is how you go about getting him. Heroes of the Storm runs a free character rotation where a certain amount of characters will be free to play for a week then the roster will switch, and you can permanently unlock characters by using in-game gold or real money. Cho’Gall will not be available (initially) through either of these methods; instead, only those in attendance at Blizzcon or those with a Virtual Ticket will unlock Cho’Gall when he becomes available. Other players will only be able to get Cho’Gall if they party up with someone who has the hero and play as one of the heads. If you win two games as either of Cho’Gall’s heads you will unlock the character yourself and will be able to spread him to more people. This viral character distribution is a brilliant idea and fits perfectly with the hero design. Not only does this instantly make Cho’Gall the most desirable character in Heroes of the Storm, purely because of his rarity, but it also encourages teamwork much like the character’s core design and more teamwork is sure to make the game more fun for many more players. It is also an incredibly risky move from Blizzard as they are effectively giving the character away for free, something they haven’t done too much (although saying that, the demand for a Virtual Ticket after the announcement managed to briefly crash the Blizzard website, so it’s not as if they will be out of pocket.) Hopefully this risky strategy will pay off, and the likes of Riot will take notice, because if I am being honest, the allure of a free hero just for playing with someone else would actually make me play League of Legends.

So with one announcement of a new hero Blizzard has introduced two new concepts to a genre that has felt bereft of new ideas for a while. And these new ideas are actually ones that will have a positive impact on Heroes of the Storm, as they both require cooperative play and teamwork. It will be interesting to see just how common Cho’Gall is when he launches later this month, and how long Blizzard will keep the free promotion going, but hopefully this will bring in tons of new or returning players and spark a new lease of life for the MOBA.

eSports! I joined God is a Geek all the way back in September 2013 and since then have spent most of my time on Dota 2, and occasionally posting the odd review, news article or totally wrong predictions for The International. When I am not playing Dota I can probably be seen watching some kind of strange eSport or begging for more Twitter followers (@MikeStubbsy if you are interested). Aside from GiaG I am a computing student, football coach and major Apple fanboy.
MORE LIKE THIS
blizzard