A Beginner’s Survival Guide to Fallout 4 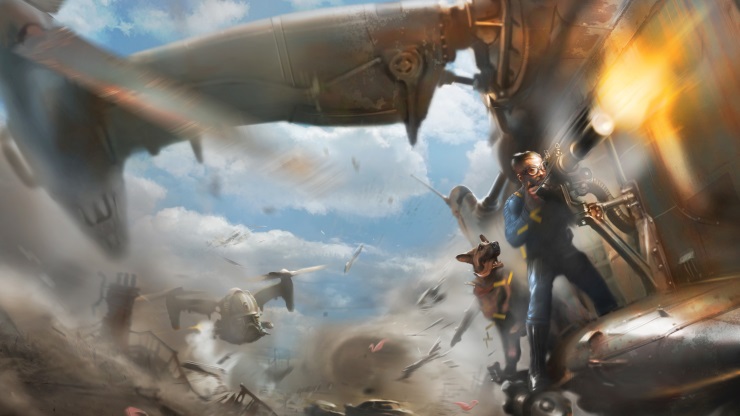 Heading into the Boston Commonwealth for the first time in Fallout 4 can be daunting. The place is huge and incredibly dangerous, so survival is anything but assured. We’ve spent a week and a half there, and hammered together a spoiler-free list of ten tips that will help you find your feet and get your bearings out in the new Wasteland – because we’re nice like that. Unlike Fallout 3, there are no weapon blueprints to be found in the Commonwealth, so you won’t be cobbling together dart guns from toy cars. Instead, you build on existing equipment, be that armour or weapons, and the component lists get longer and harder to come by. You’ll also be building and upgrading farms and settlements, taking responsibility for feeding and defending your settlers.

Everything you build or upgrade uses parts you can find in pretty much anything you can pick up or scrap from your Workshop View, including, but not restricted to, sofas, cars, kettles, microscopes, trees, clipboards, cups, cutlery, toys and trash. In other words, loot the crap out of everything you see. You can store it all in your workshop, which will also handily break it down for you when you need it. You simply can’t loot or scavenge enough in Fallout 4, so fill your boots. This is an open world RPG with moral choices and dialogue trees and all that jazz, and there are hundreds of opportunities to make friends and influence people, or piss them off and burn your bridges. While it’s almost impossible to derail the main storyline without straight-up murdering people, you can close off certain avenues and side quests if you walk around choosing the “sarcastic” option every time.

Of course, there are plenty of arseholes in the new Wasteland, so sometimes sarcasm works best, but the point is that it’s not worth upsetting everyone arbitrarily unless you’re really into role-playing that kind of character. Putting a few extra points in Charisma early on is usually bad advice in an RPG, but in Fallout 4 it makes a lot of sense, as do the Man Eater and Lady Killer perks, because they improve your chances of successful persuasions – and threat attempts, if that’s your bag. You can’t choose to play as a Super-Mutant, so even if you pour extra points into Strength from the off, there’s a limit to what you can carry. That means if you’re packing a decent suit of armour, you’re not also going to be able to load up with a ton of guns. Experiment by all means, but sooner or later you’ll pick a handful of weapons that get you through most situations. Once you do, it’s worth stockpiling say, 100 rounds of any ammo you don’t use, and saving the rest to trade against things you need to buy later. Ammo is everywhere, and you’ll earn a cap per round from every trader. There are several companions to be found and recruited around the Commonwealth. Some will join you because of shared interests, some because you saved their lives, some because you paid them to. In addition to having an extra gun in a fight (or pair of jaws, or hammer made of concrete), they also have various skills like lock-picking or hacking. Besides that, it doesn’t hurt to use them as mules when you’re overloaded with booty. Just be aware of their personalities, as it’s easy to upset them if you do something they don’t agree with. Keep them on-side, however, and they might even give you something to do.

5. Eat what you kill The Wasteland is a dangerous place whether it’s DC or Massachusetts, and sooner or later you’re going to get hurt. Stimpacks are the fastest and best way to patch yourself up, but they’re not always in supply. You can make them at a Chemistry Station or buy them, but they’re pricey.

One form of curative that’s readily available is meat. You can’t cross the Wasteland on foot for long without being attacked by something, and every animal can be harvested for meat. It’s full of radiation, of course, but for some reason cooking it cures that. Not only does cooked meat refill your health, but it often has other properties as well. After being criticised for Fallout 3’s ridiculously low level cap, Bethesda listened. The result is that this iteration has no upper level cap, just a soft cap when – or if – you’re able to spend all 270+ skill points to unlock every level of every perk.

That means that, while it’s a good idea to have some kind of plan regarding the type of character you want to play, you could potentially unlock everything at some point – so don’t feel restricted. If you’re struggling to carry enough gear, grab Strong Back. If you want to find all the secrets, up your Perception and grab the Locksmith and Hacker perks. Armorer, Blacksmith, Science and Gun Nut are essential of you want to make the most out of the crafting system. Choose carefully, by all means, but don’t agonise too much over your choices.

7. Wander off the beaten path You can go straight out of Vault 111 and throw yourself into the core quest if you like. You’ll see a fair portion of the Wasteland, meet some colourful characters and level up enough perks to get a taste of what Fallout 4 has to offer. But that’s it. If you want to really have fun out there, you’ll have to think outside that particular box of Iguana Bites and explore.

Ammo-up, grab some stimpacks, pick a direction and walk in it. Investigate radio signals, distant points on the map, camp fires and flashing lights in the distance. Pick locks and hack security doors, talk to people, loot bodies and read notes. Don’t be afraid to go off the path and poke your nose in where it’s not wanted. There are potentially thousands of combinations of armour and weapons, and finding the right one for you might take time, especially as you’re unlikely to see things like the Syringe Rifle, Railway Spiker and plasma weapons until you’re a fair way in. Experimentation is important, and trying everything out is a lot of fun.

Because the weapons are so customisable, it’s easy to start off with a rusty pistol and end up with a rifle complete with a long-range scope, a massive magazine capacity, increased damage output and a whacking great bayonet. Legendary items can’t be scrapped, but they can be modified and they often have cool buffs like specific damage boosters. Armour parts can be coated in different material, increasing your ability to sneak, or boosting your resistance to radiation or energy projectiles. As long as you have the right components and skills, it’s worth experimenting a little. The Boston Commonwealth is a big place, crammed full of things just waiting to be discovered, and scores of farms, hamlets and settlements. By working with the Minutemen (the first faction you’ll discover in Fallout 4), you’ll often be called to liberate these habitats from rampaging ghouls, raiders, mutants or monsters. Helping them will usually persuade them to join your cause, an arrangement that not only lets you use the workshop in each place to build defences and expand, in turn attracting more settlers.

But you can further exploit such patronage with the Local Leader perk, which allows you to build and invest in shops or set up supply routes between settlements that allow them to share food, resources and crafting supplies. Helping the people helps you, so it’s worth putting that pipe rifle away and helping people out now and then. Fallout 4 isn’t easy. Because you can’t tell what level an enemy is, it’s worryingly common to wander into a fight you can’t win, especially with legendary enemies dotted around the world, and Deathclaws who can kill you in just a few hits. So either trust the Autosave, which triggers when you enter a new area, or hit Quicksave as often as you like. Rather than using it to help you survive, it’s often better to hit Quicksave before making major decisions so as to avoid any permanent ramifications.

Senior Content Editor Mick has been playing games for over 30 years and writing about them for around 12. After drifting from site to site for a while, settling briefly at the now-defunct Made2Game and freelancing for the gone-but-not-forgotten NintendoGamer Magazine, he came at last to rest at Godisageek. Mick has been a reviewer, staff writer and content editor here for some time, while also moonlighting a little for Red Bull Games. He has 4 kids, has written 2 novels, and sometimes even manages to pay a bill or two. You'll usually find him defending the galaxy in Destiny 2, battling evil in Diablo 3, or lurking in the background on Twitter. Find him there @Jedi_Beats_Tank, or on XBL (JediWaster247), PSN (Jedi_Waster) or Nintendo (JediWaster).
MORE LIKE THIS
bethesdafalloutFallout 4