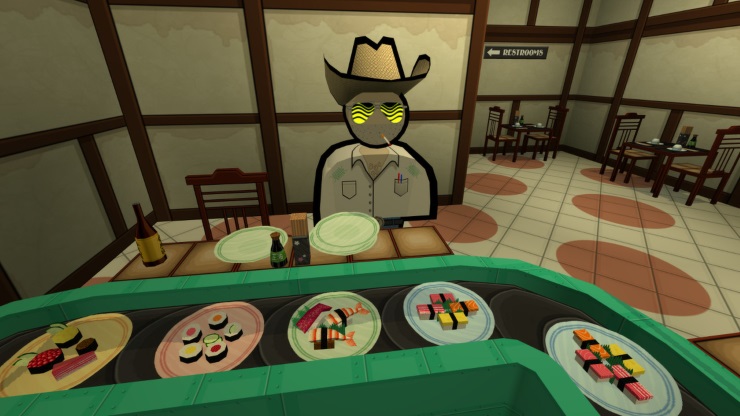 One of the funniest games of 2014 (or, aside South Park: The Stick of Truth, in years, to be honest) was Adult Swim and Necrophone Games’ Jazzpunk.

A bizarre, almost comic-book adventure that plays out as a first-person game, it was only available to those of you playing games on PCs, until soon, apparently. It also features Jim Sterling (that one, yes), whom we interviewed, here.

Announced over on Sony’s PS Blog, the game is coming over to PS4 and, even better, is getting new content.

But we didn’t want to stop at doing a simple port of the game, so we’ve been grinding away on new content and new modes that will be exclusive to the PS4 version.

So for those of you that have played Jazzpunk before, what’s new? Obviously there are some spoilers here for people who have yet to play the game. In Jazzpunk, one of the mini-games we included was a full-on parody of multiplayer old school deathmatch games like Unreal Tournament, Goldeneye and Quake 3 Arena, called Wedding Qake. Since release, one of the most requested features from fans, was the expansion of this “Wedding Qake” mini-game into a proper multiplayer mode.

We’re pretty jazzed to announce that we will be unveiling a full four-player splitscreen multiplayer mode into Wedding Qake, with unlockable characters and new levels, and fresh implements of devastating MATRIMONY. In addition to this, we will be adding some new content to the single player game, but I don’t want to give too much away about those, just yet. Comedy thrives on the element of surprise, after all!