My First Time in Fallout 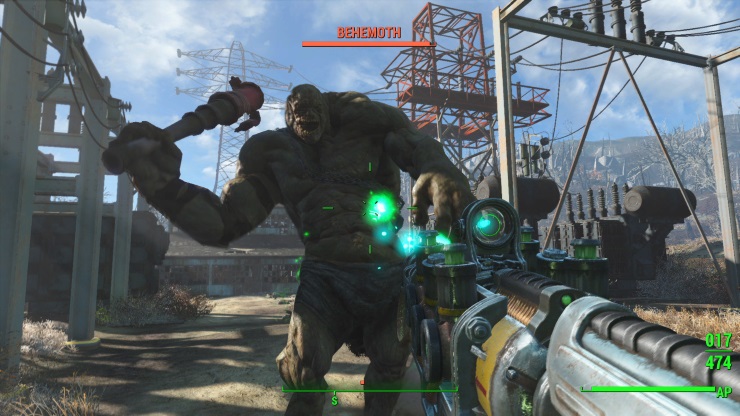 Over the last few weeks I’ve been embarking on a journey across a toxic, dangerous post-apocalyptic nuclear wasteland, in which death literally waits around corner. No, I’m not talking about Croydon, I am of course referencing the post-war Boston that Fallout 4 calls home.

Now, this is my first ever time in the incredibly filthy world of Fallout. Actually, that’s a lie, when I was a lot younger than I am now I heard from my far more informed friends about how great Fallout 3 was. So I thought I’d give it a crack. I went to a Blockbuster (fucking hell, right?), rented it for a week and soon as I got home I whacked it into the tray of my Xbox 360. Things were going well, I escaped the vault once the shit hit the fan with relative ease and, as the sun momentarily blinded me as it appeared on the horizon, set down on the path to explore this derelict world. I came across a robot playing music, I tried killing it. It shot me to pieces. Good start.

After that I avoided robots like the plague and made it to Megaton. I had very little idea of where I was and what I was supposed to be doing, I fell off a ledge and when I looked up I was standing, heavily injured, next to a nuclear bomb. After suppressing the sudden terror thinking I was going to set it off, I eventually came to and defused the bomb, saving the town. I then set off on my travels again, at night, which was a massive mistake. I wasted all the ammo in my weapon on trying to kill a fucking mole rat that just wouldn’t die and then started getting shot at by some unseen foe. I made a break for it and finally made my destination, it was the start of a tunnel of some kind.

It clicked in my mind that this was the dreaded tunnel my friends and spoken so much about, filled with ghouls or something? I stood outside the door to the tunnel, armed only with a baseball bat and an air rifle, absolutely shitting my pants.

I turned off the 360 and never played Fallout 3 again.

Now, years later, I’m back in the world of Fallout and fairing a little better – even if I did start in similarly inept fashion. I managed to make it out of Vault 111 without dying, just, but did waste a whole round of ammo on one Roach that refused to stay still so I could kill it. Upon reaching the outside world I immediately wanted to return to my pre-war home that, after 200 years, was still somehow standing despite being made of wood and being in the blast radius of a nuclear explosion.

I didn’t realise that you could simply walk down the cliff and instead I tried to re-enact the steps that I took to the vault 200 years ago. I took a wrong turn somewhere and in the distance I saw a ghostly, humanoid figure walking. Although I was immediately scared, as I was nowhere near ready to take on anything that was taller than my shin, I was overcome with curiosity and attempted to reach him. The rads soon started clicking and I had to run in the opposite direction instead. Phew.

After talking to a annoying robot, meeting a cute dog and easily killing a Death Claw (I rinsed the bastard with a minigun, I did) I tried to branch out a bit and explore my immediate surroundings – all on my own. I came across a freeway bridge and climbed atop of it. Scouting around and looking for something interesting to explore, I came across an encampment of bandits. Taking my lofty vantage point upon the bridge I attempted to equip my only long range weapon, the crank laser riffle I’d acquired in Concord. I accidentally dropped it off the side of the bridge.

I instead took my pistol, looked down the sights at a lone bandit on top of a watch tower, who was facing the opposite direction. I missed. She was alerted, as was the entire camp. One of them turned in my direction, fired a missile and then I died. After another four attempts at killing the camp from the bridge I gave up and tried to avoid it all together by sneaking around. I chanced upon a mad man in a crate with a machine gun and two vicious dogs. Then I died. Sighing, I then attempted to walk the other way around the camp and it was going well. Then two massive fucking crabs jumped out of a puddle and chased me. My heart fell out of my arse and whilst actually screaming in real life I tried to run away. I turned and tried shooting them. Then died.

All of this has taught me that the world of Fallout certainly isn’t a pleasant one, and that death can come from any direction at the least suspecting moment. I’m now a lot more hours in than I was when that whole ordeal happened, and I’m now pretty capable in every combat situation, though I’m yet to face a Death Claw again, so I’m dreading that like a dog dreading a visit to the vets.

I am really enjoying Fallout 4 so far, I think it’s a great world to just get yourself lost in and see what interesting stuff you can find. I particularly enjoy reading the stories that people write on the terminals, they just add that little bit of depth to the world. However, I am having some problems with really getting my self invested. I’ve gotten to the point where I’m feeling extremely overwhelmed with everything I’ve got to do, I’ve got about 15 quests open at the moment and since they’re all pretty much “travel to place and shoot things” I’m not exactly feeling to inspired to complete any. Which makes me feel like I’m putting valuable time into something without actually progressing.

Also, I’m finding it hard to look past something from a narrative perspective, and it’s a problem that Far Cry 3 had too. My character has just woken up after 200 years, he’s just entered into a completely new world which he doesn’t know anything about. I really feel like he should be going slightly more crazy than he is, and there isn’t really an option for me to make him act as if he’s losing his mind – which I undoubtedly would be in that situation.

These problems are more my fault than the game’s its self, but it’s just what’s holding me back from fully enjoying such a brilliant experience.