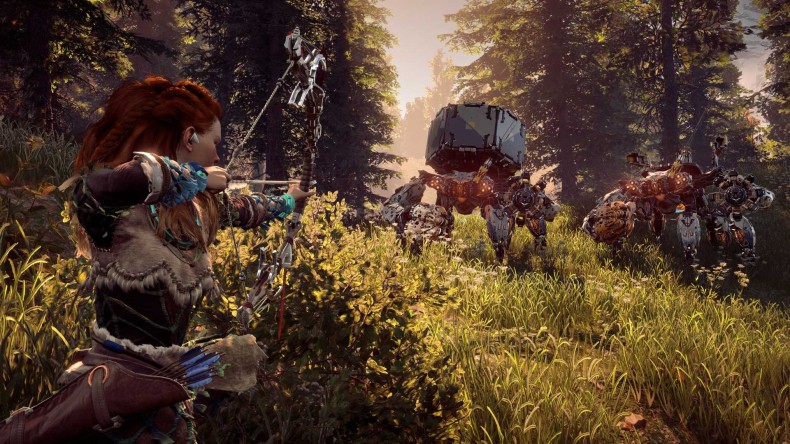 It’d be understandable if people have started to become fatigued with the third-person, open-world adventure game, because there’s absolutely loads of them out there. But after playing it, I believe Horizon: Zero Dawn might just be mixing things up enough to breath new life into the genre.

I got to spend an hour with Horizon, the first half of that was a slightly extended play through of what was in the Sony conference, only with some interesting insight from a developer. For the second half, though, I got hands on, and was allowed to roam free in a small area that was created for the demo. The area in question was the part of the map that in the demo the character, Aloy, gains a mount. I was given a few optional objectives for guidance, but otherwise I was free to do as I pleased.

Probably too much of that time was spent skidding, because it’s fantastic. This is probably rather a small facet of Horizon that I’ve decided to initially focus on, but it’s so satisfying. While sprinting if you hold down the crouch button (square), Aloy will skid along the ground. It’s a skid that lasts a good number of seconds and you can even slightly control which direction you move in when using it, so it’s great for escaping, dodging into cover, and evading enemies by going through their legs. I felt like Will in that Inbetweeners episode. Skidding is cool. Games need more skidding.

Alongside the skidding, the rest of Horizon plays really nicely as well. I was told the play loop that the dev team are going for is “recon, engage, retreat – engage again if required”, and it’s a very satisfying way to play. Aloy has a lot of weapons at her disposal, but against more aggressive, powerful machines (especially ones that gather in herds) she can’t really take them all on in one go, so you have to be smart and calculating about how you engage with foes. The first port of call, then, is to scan them to asses a machine’s weaknesses, strengths, and what (if any) supplies they’re carrying. I scanned a small gathering of three “shell walkers” (the crab-like machines from the demo), and the weak spots were highlighted in yellow – they turned out to be the clamps that hold the supply canister in place. From a safe distance, I shot a canister loose, sprinted to collect the goods and tried to escape. As I did so one of them noticed me and began to charge. While backpedaling I laid down an explosive trap, as it went over it I shot an arrow at the trap and boom went the creature. At this point the other two caught wind of me so I had to leg it to assure I didn’t get killed. When they’d calmed down I quietly sneaked back in and engaged again. I shot the arms off each of the walkers which meant they could no longer use their shield or their weapon, leaving them pretty exposed. I tethered one to the ground as I dispatched of the other with my staff/spear-thing, which has a strong and a light attack controlled by the bumpers, and then the tethered one received a flaming arrow to the face.

The battle took, in total, probably around five minutes or so, but I really loved how it wasn’t a walk in the park. I did plan what I wanted to do at first, by being stealthy and slow, but when it all went wrong I had to improvise and get out of dodge before going again. It makes the fights against tough to kill creatures actually feel like a slog, and you have to be smart about it by doing recon and taking out weaknesses, rather than just running in blind. It also helps that the combat, from shooting arrows and tethers to smashing them with a stick, all feels really satisfying and fun to do. The weapon wheel makes selecting different weapons and ammunition easy, and you can craft more ammo on the fly if you have the supplies, making the combat more streamlined and fast paced.

That was only an attack against one species though, and it seems as if there’s going to be plenty in the game. In the demo I played there was about four different kind of machine, and every one of them had their own strengths and weakness. For instance: one Diplodocus-type machine had several exposed fuel canisters on its back. When a canister was shot with a flaming arrow the machine would go berserk and run about, before blowing up. What impressed me the most was how every species of creature acted completely different to one another and had their own way of life. It made it feel as if Horizon has its own living, breathing ecosystem. If the Broadheads see you they will run away as they’re scared machines, but if the Shellwalkers see you they’ll charge at you as they’re more aggressive. Also, herds of Broadheads have machines called ‘Watchers’, which remind me of Raptors, that will defend the herd if you attack it. It seems as if a really complex and interesting world is being created here, and I really want to see how deep it goes. Which leads on to why I’m now actually really pleased Guerilla decided to set their cavemen vs dinosaurs story thousands of years in the future and have the dinosaurs actually be machines. While having a proper dinosaur game would have been amazing (and I still want one at some point), what Guerilla has done seems completely original in any medium. The setting means the characters in the games can actually speak English to each other rather than having to speak caveman, which surely makes the storytelling better, but moreover, because this world is so mysterious and interesting, we don’t know what’s happened and we want to find out. I was told many of the questions (such as: how did the world end? Where did the machines come from? How did these people survive? Where is the game taking place? Why have the machines suddenly started getting corrupted? Where are these new machines coming from?) will be answered during the game, and I really cannot wait to find out for myself what’s going on. I was also told that during the game you’ll be able to explore old, derelict, abandoned cities which may still be recognisable from the modern day, which sounds ace.

On top of the fun combat, interesting machine creatures and intriguing world, Horizon: Zero Dawn looks stunning. I found myself wasting time just looking at the beautiful lighting from the setting sun as it shone through the trees. Nature truly has overrun this world and she looks gorgeous, with sparkling streams, thriving forests, and luscious meadows, with the slightest sprinkle of snow falling from the skies. The nature contrasts with the mechanical, explosive machines and it just makes the design of them look even cooler as they’re in a setting you usually wouldn’t expect to find big robots. The developer knows how pretty their game is and they’re actually letting the player see it, too. The UI is dynamic and only appears on the screen in combat or when you want it to, and even when it is on the screen it is really slick and unobtrusive.

Horizon: Zero Dawn was one of the best and most interesting things I played at E3, and I’m really looking forward to playing more.

Some Other Interesting Titbits:

There are two currencies in the game: shards and blaze. Shards are the common currency, and used to craft ammo, so there could be an interesting balance there. Blaze is more valuable and is found from destroying rarer and more difficult machines.

Weapons have different ammo and modifiers, can be customisable.

Outfits have stats, bonuses, weakness, and can also be modified. You’ll have to wear warmer clothes in colder climates.

The map looks huge, and seems to have snow, desert and forest areas on it.